The new clown in town 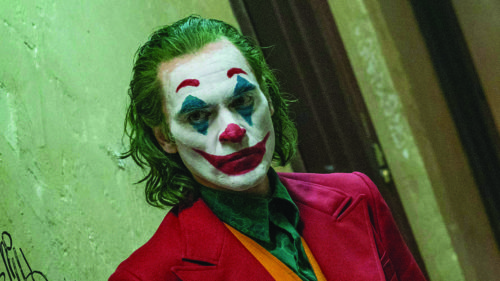 Scrap everything you know about the infamous supervillain when watching the new film, “Joker.”

Joaquin Phoenix plays the role of Arthur Fleck, who is better known as the Joker. The movie provides a new backstory that we’ve never seen before on the big screen as well as seeing Gotham City in a new lens. Director of the film, Todd Phillips, wanted to have this Joker emulate the same villain featured in the novel, “The Killing Joke,” where the Joker mentally wore down Batman.

The movie starts with Arthur Fleck at his job as a clown doing sign spinning for a company going out of business. A bunch of kids come up to Fleck and steal the sign before running away, with Fleck chasing after them. Fleck then gets smashed in the face with the sign then gets jumped by the delinquent teenagers.

That seems to be Fleck’s life summed up. He’s just unlucky and is living a sad life that he shares with his mother. He’s been living with his mother his whole life, taking care of her in the horrific apartment that they live in.

This movie portrays everything differently than any other Joker film we have seen before. This movie has a new dark element to it, which is different for the viewers. I can’t say if the fanbase will enjoy the new perspective, it just depends on the individual’s taste of movie style. Phoenix brings the mentally insane out of the Clown Prince of Crime.

In the original “Batman” film, starring Michael Keaton, this Joker is portrayed as a literal clown. Jack Nicholson plays the role the way you would see a clown in real life. Just goofy, corny jokes and even has deadly props to show. His Joker even gives people some comedic relief with his witty humor.

Nicholson’s Joker even has a backstory as a businessman who plans on making Gotham an even worse place than it already is. In a factory getting chased down by the police and Batman, Nicholson’s character falls from a catwalk and lands in chemical waste altering his appearance. This would lead him to become the Joker.

Next, there is the “Agent of Chaos” Joker who was portrayed by the late Heath Ledger. Ledger’s Joker, arguably the best Joker performance ever done was quite different. His Joker appears on the screen with no backstory, he escapes Arkham and causes chaos in Gotham.

This Joker is a crime-ridden freak who wants to control Gotham with the unstable state it is currently in at the time. He causes fear to the public and is a true mastermind at what he does and tries to crack down Batman to show that Gotham is weak.

Joaquin Phoenix’s Joker stands out from the other two Jokers. In this movie, viewers see placing someone with mental illness in a horrific society and seeing how that affects the person. This Joker shows the effect of society has on some people who have mental illnesses. It shows the effect it has on the individual and shows the line between what is real and what is imagined.

In this movie, there is a twist where people aren’t feared by the Joker. If anything, he is looked up to as a figure of inspiration, showing people the corruption of Gotham and that nothing will ever be fixed for them.

It’s pretty easy to say that Joaquin Phoenix’s Joker is one of the best Joker performances we have seen, but it’s hard to say where he ranks among the others. This movie puts the villain in a new perspective that viewers haven’t seen before. If DC Comics keeps this Joker for future films, they have something great going forward.