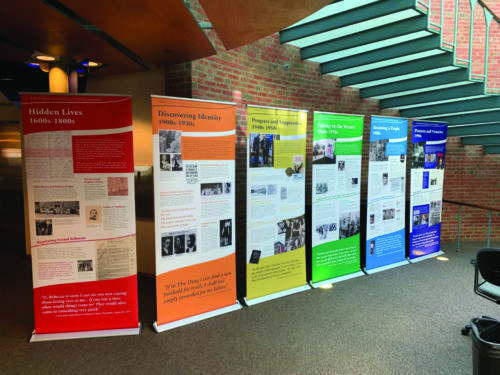 The Arnold Bernhard Library, also known as Arnie by many Quinnipiac students, has held a variety of different exhibits in years past, but nothing has compared to the new exhibit, Robert Young, public services librarian, has put on for the month of October.

Young has helped plan two different exhibits that will be running until Oct. 31. The first exhibit, that is going on currently, is all about Connecticut’s LGBTQ Community, which has been on display since Oct. 3, and will continue being displayed until Oct. 16.

The second exhibit will be shown in the library starting on Oct. 16 and will be ending on Oct. 31. This specific exhibit will focus on Quinnipiac’s LGBTQ Community, looking at how it has evolved over the years.

The LGBTQ History Month exhibits were brought to Quinnipiac’s library after the school was interested in displaying some different exhibits during the fall semester, according to Young.

“About mid-August, the director of our library said, ‘let’s get some interesting exhibits for the fall semester,’” Young said. “So, I started looking around and I remembered that back in June the Connecticut Historical Society had mounted a brand new exhibit about the history of the LGBTQ community in Connecticut. It’s a traveling exhibit that’s eight pop-up banners and they make it available to anybody who wants to display it.”

The eight pop-up banners provide a brief history overview of Connecticut’s LGBTQ community from the colonial era to today and how it became a community, found its voice and became more visible by society at large. Not only that, the exhibit was also created by college students.

“What’s really interesting about it, they [the Connecticut Historical Society] approached William Mann, who is the director of the LGBTQ Center at Central Connecticut State University,” Young said. “He also teaches there. When they approached him a couple of years ago, they asked him to create something with them. In one of his history classes, he had the undergraduate students in that class do the research for this exhibit, which is pretty cool.”

Alongside the exhibit all about Connecticut’s LGBTQ community, Young was interested in planning an exhibit about Quinnipiac’s own LGBTQ community, that will be officially on display at the end of October, but currently has a small case up right now.

“So what I decided to do, when I found out we could get the exhibit [about Connecticut’s LGBTQ community] for two weeks in October, I thought ‘Let’s see what we can have on display about the history of the LGBTQ community at Quinnipiac,’” Young said about planning the two exhibits. “So I spent the past couple of months going through like 40 years of The Chronicle.”

One of the bigger contributions to the Quinnipiac part of the LGBTQ history exhibits was a slideshow made by students who are a part of the Gender and Sexuality Alliance (GSA) club on campus about what it means to be a part of Quinnipiac’s LGBTQ community today.

“So what I did is that I contacted Lindsey Downey, the president of GSA, and Bill Jellison who is the faculty advisor and psychology instructor,” Young said about creating the Quinnipiac LGBTQ Community exhibit. “So they came over and met with me. They didn’t have a lot of content, but they did have some materials. We are going to be using some of their materials. They did a fantastic job [with their powerpoint].”

The powerpoint, created by GSA, went into depth about GSA’s role on campus and how it came to be here at Quinnipiac, educating students as to what it means to be a part of the organization in addition to how it has impacted the overall community.

“I would say that GSA’s main contribution to the exhibit was the slideshow that is playing on the TV by the reference desk,” Downey said explaining how GSA contributed to the exhibit about Quinnipiac’s LGBTQ History exhibit. “While the rest of the exhibit focuses on the history of Quinnipiac’s LGBTQ community, Robert and Cecilia let us use the slideshow as a way to showcase what GSA is currently, what we do on campus, what the LGBTQ community looks like today and what we’re hoping to do in the future.”

Along with the powerpoint created by members of GSA, Young incorporated some profiles on some well-known members of the Quinnipiac community including some students and leaders on campus.

“Also I thought for Quinnipiac’s history, the fact for Austin Calvo was elected president this past spring and I thought that was interesting,” Young said. He explained why he wanted to incorporate a Quinnipiac part of the exhibit as a part of the larger on about the LGBTQ community in Connecticut. “As a matter of fact, he’s going to create a little profile about himself for the second part of the exhibit. I’m going to highlight him. Jennifer Brown who’s the acting provost and dean at the law school. She was one of the lead attorneys for many years for the Freedom to Marry organization. So I’m going to have a profile for her. I even looked into Professor Olian about before she came to Quinnipiac. The Anderson School out in California, where she was the dean, she was there when they initiated LGBTQ program in support for those students and I found photos of her holding up a rainbow sign.”

With the work that was put in to both exhibits, students are encouraged to take some time to read them and learn about both Connecticut’s and Quinnipiac’s LGBTQ communities, especially with National Coming Out Day happening on Friday, Oct. 11 to celebrate coming out to family, friends and colleagues.

“I hope that when people see the two exhibits that they actually take some time to read through them and realize that the LGBT+ community has always been around, and that it’s not something new,” Downey said. “In particular to the QU exhibit that will be up fully later in the month, I think it will be really cool for people to realize that the history of the LGBT+ movement wasn’t that far removed from our reality. The timeline that Robert found was really touching to me personally because the same themes that we read about from the LGBT movement in bigger cities were also happening on this very campus. And the fact that there’s some very recent stuff included reminds me that we are still are moving forward and that what we’re doing on this campus does matter.”