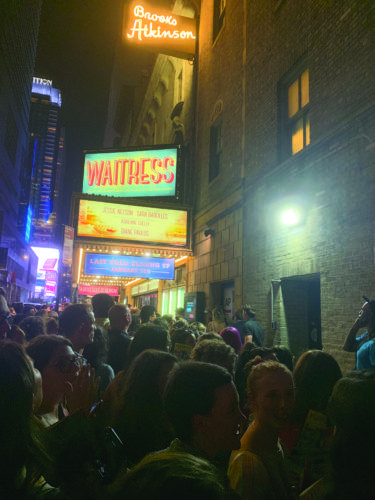 The iconic Broadway show, “Waitress,” is ending its time at The Brooks Atkinson Theatre with a series of unconventional cast members before it closes on Jan. 5, 2020.

Colleen Ballinger, Todrick Hall and Jordin Sparks are some of the faces that may strike you as unusual on the Brooks Atkinson Theatre’s stage.

And yes, I am one of the many people who were sucked in to paying an absurd amount to see two of my favorite YouTubers take over the Broadway stage. I then fell in love with the musical enough to see it again with a whole different cast, with Sparks as the lead.

Ballinger, who is well known for her YouTube persona, Miranda Sings, made her Broadway debut as Dawn, a  quirky, Southern waitress, on Aug. 20. She was joined by Hall, a fellow YouTuber, who played Ogie, her nerdy lover in the show. Although Hall has been in other Broadway shows, such as “Kinky Boots” and “Chicago,” this internet pair definitely drew a crowd to the Brooks Atkinson Theatre.

The lead role, Jenna, was played by Alison Luff, at the time. I had never heard of her prior to seeing her face in my playbill, but I was absolutely blown away by her performance. Jenna is a pregnant, southern pie shop worker who is in an abusive relationship, who has the baby, leaves her husband, and opens up her own pie shop. Luff brought Jenna to life in such an emotional way, it brought me to tears.

Their run ended on Sept. 15, and although it was short, it was definitely impactful. Tickets were in high demand as prices skyrocketed from around $70 to over $300 for orchestra seats for these dates.

It was certainly a different experience compared to the other Broadway shows I have seen before. I saw it on its opening night, so the energy was high, and it was very clear that the crowd was full of fans of Ballinger and Hall.

However, with the crowd consisting of mostly young fans of the two YouTubers, a lot of them were getting up and leaving before bows to get their playbills signed. Ballinger later expressed her frustration on social media about this.

The stage door was absolutely insane. People were in the streets and even though I stayed for bows, I still managed to get squished up against the barricade (which was totally worth it). I was able to get my playbill signed and take pictures with Ballinger.

Just before the YouTubers left the diner, “Waitress” announced that Jordin Sparks, season six’s winner of American Idol, will be taking over the lead role, Jenna, starting Sept. 16.

My first reaction was “No Air” Jordin Sparks? Sparks had a lot to live up to after I fell in love with Luff’s portrayal of Jenna, and knowing her rich voice, I doubted her abilities to portray a small town southern pie shop worker. However, I was pleasantly proven wrong.

Last weekend I found myself back at the Brooks Atkinson Theatre, happier than ever, with my best friend. I knew this performance would be different compared to when I first saw it, but I was not really sure exactly what to expect.

Immediately we were both taken back by the way Sparks owned the stage the moment she began singing her first number, “Opening Up.” Her voice fit the song so well, and because of that it almost seemed as if she put her own twist to it, allowing the words to come to life in her own way.

Although I went into the show comparing Luff and Sparks, I was more surprised by the comparison of the performances of Ogie. This time around the role of Ogie was taken back by Christopher Fitzgerald, who played the part in the original cast back in 2016. Comparing Fitzgerald to Hall, their portrayals of Ogie seemed like two separate characters.

It did not feel like Fitzgerald was playing a part, it felt like he was Ogie. His energy was radiant. From his geeky dance moves down to the way he took puffs of his asthma inhaler after gushing over Dawn, it all just felt real. Hall on the other hand, seemed to downplay the character. Although his performance was very good, he did not bring as much of the love-struck and nerdy attitudes as Fitzgerald did.

This time around, Dawn was played by Molly Jobe, an understudy. She was very talented, and her southern accent was a lot more realistic and toned down compared to Ballinger’s, but nothing will ever compare to Ballinger’s overall performance. Ballinger really brought Dawn to life with her facial expressions and outgoing attitude, which is something so unique to her as a performer.

As far as the stage door experience, we were in a bit of a rush, so we did not wait to get our playbills signed. However, it was evident that the stage door was not even close to being as hectic as it was when the two YouTubers were a part of the cast. There were many open spots by the barricade, and it was certainly an older crowd.

Both of my experiences at the diner were incredible, but it is evident that each set of cast members set the stage in their own ways.

Sparks ends her run at the diner Oct. 27, and “Waitress” can be caught on tour in 70 cities outside of the Big Apple.