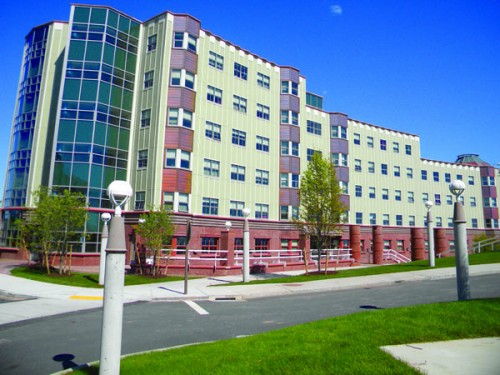 surprise $10 parking ticket left on their windshields on Nov. 29. The tickets were distributed on account of “vehicles parked in prohibited lots,” according to Chief of Safety & Security David Barger. While it may have been the start of the holiday season, this was one present from security students wished they could return. -NF" />

After months of planning and construction, the Eastview residential area on the York Hill campus finally opened for business this past August. The residence hall features 34 dorms equipped with air conditioning, a kitchen and a common room. All Eastview residents have access to the 120 parking spots located next to the building. While this parking privilege has its perks, Eastview residents were not expecting the surprise $10 parking ticket left on their windshields on Nov. 29. The tickets were distributed on account of “vehicles parked in prohibited lots,” according to Chief of Safety & Security David Barger. While it may have been the start of the holiday season, this was one present from security students wished they could return. -NF
Emily DiSalvo

Bobcats are only two months into the fall semester, but QU’s Office of Residential Life is already asking students to make plans for next year.

Sophomores received an email from Melissa Kardipis, associate director of residential life, on Oct. 4, announcing that junior housing selection will be taking place in November this year.

Students will be able to select a bedroom, multiple bedrooms or a full suite starting Nov. 18 and 19 for juniors.

Mark DeVilbiss, director of residential life, said the Office of Residential Life decided to make selection earlier because he knows students like to plan ahead.

“I think a lot of students are interested in solidifying their housing options for next year and we wanted to be sure that they could do that with QU housing,” DeVilbiss said.

Previously, junior housing selection for the following year did not take place until the spring. Some students think moving selection to the fall could cause some complications.

“I think it’s a bit early because I’m still trying to figure out who I want to live with,” Juliana Vitti, sophomore computer information systems major, said. “I also am trying to find an apartment off-campus, but this is adding more pressure.”

Kardipis and DeVilbiss both stressed the benefits of living on-campus.

“Living on campus provides you with the opportunity to live close to friends, close to your classes and have 24-hour support from University staff,” Kardipis stated in the email.

Other current sophomores are concerned that they won’t still want to live with the groups that they select this fall, by the time next fall comes around.

“So much can happen between November and spring semester,” Shannon Flaherty, sophomore media studies major, said. “It’s going to make things awkward for the next semester if you don’t plan to live with your current roommates.”

DeVilbiss said that students will be able to make changes to their rooms as soon as this fall if students change their minds about who they want to live with. He said that choosing to live in QU housing allows for flexibility with roommates that living in an off-campus property would not afford.

“We are happy to offer students who might want to change housing plans later the opportunity to switch into another available space also in QU housing,” DeVilbiss said. “It’s one of the benefits.”

Juniors will have the choice to select any bedroom or multiple bedroom that their housing group can fill, according to the email.

The email lists several examples. A student who has not selected a roommate can select a single room. A group of two can select a double room in an apartment or two single rooms in the same apartment. Students can also form groups to select full apartments which was previously the policy.

Additionally, juniors have the option to select a “deluxe single” in Crescent. This means that one person will live alone in a double in Crescent.

DeVilbiss said there are some students living in deluxe singles this year, but the upcoming housing selection cycle will be the first time that deluxe singles will be offered as an option up front.

For the upcoming year, Quinnipiac-owned houses will come fully-furnished for the first time.

Additionally, graduate students will be able to live in Crescent, Whitney Village or in Quinnipiac-owned houses.

DeVilbiss said all of these changes were motivated by student feedback.

“We’re striving for flexibility and we want students to live with who they desire to be around,” DeVilbiss said.