Politics: past and present 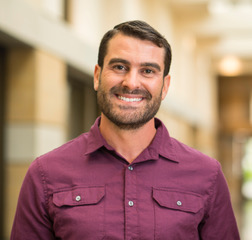 Professor Marcos Scauso is one of the newest additions to the Quinnipiac University community. As an assistant professor of political science, he currently teaches Introduction to International Relations and Issues in Politics.

To adequately understand Scauso’s affinity for political science and how he came to become a professor, one must start at the beginning.

Born in Villa Maria, a “very homogeneous and fairly boring” small town in Argentina, Scauso always thought he would become an engineer to help with his father’s business. He was educated in Argentina up until graduate school, except for studying abroad in Hungary during the 2000-2001 academic year as an exchange student during high school.

Scauso’s parents saved money to send him to Hungary through the Rotary International, where the only cost was travel expenses. While he was abroad, Scauso found his love for languages, international relations and politics, especially in regards to how they affect people.

“I fell in love with the possibility of learning other cultures,” Scauso said.

In Hungary, Scauso studied the English, Portuguese and Hungarian languages. He said he saw learning these languages as an insight into their respective cultures and societies. Scauso believes “words are the things that define the world for us.”

Scauso also said he recognizes the power that individuals have in changing their world. Upon his homecoming to Argentina in 2001, Scauso’s country was in the midst of an economic and political crisis. There, he became active in the student movement through advocating for students’ rights and keeping education public in Argentina.

Through their efforts, the students saw change: military secrets were published, archives were opened, military dictators were tried for crimes against humanity, gay rights were established and higher taxes were imposed on upper classes. Argentina saw a conservative government ousted and transformed by progressive ideology in a matter of months.

In 2003, Scauso left for the United States with his partner, Caroline, who was from the U.S. Scauso, unable to afford a standard visa, did agricultural work in California for several years to remain in the country. Through his work, he had access to Latino communities and was able to better understand the Latino experience and struggle within the United States.

In California, Scauso earned his master’s in international relations from San Francisco State University (2012), and his master’s in political science (2015) and Ph.D. in political science (2018) from the University of California, Irvine. Last year, after earning his degrees, Scauso and his wife Caroline and son Timothy, 7, moved to Indiana. There, Scauso researched for a year at the University of Notre Dame.

Most recently, this past August, Scauso and his family ventured to Connecticut. He appreciates the bustle of urban life in New Haven and New York City but also enjoys the suburban quietude of Connecticut’s “beautiful, relaxing, green town.”

So far, Scauso said he has been able to draw parallels between his collegiate experience and that which he observes at Quinnipiac. Scauso believes the immense level of student activism in Argentina is absent in the U.S., but he said that could change due to the current political climate.

At Quinnipiac, Scauso said he can observe and understand students through his teaching.

“I see a conscious and critically-thinking millennial,” Scauso said. “And that’s very pleasant.”

Within the QU community, Scauso wants to be an ally as a Latino faculty member, seeing that the Latino population at Quinnipiac is underrepresented. Scauso, though, finds it critical to think of all Quinnipiac students, faculty and administration as allies.

“The university is a very friendly environment in which there is a lot of room for changing things and making things better,” Scauso said.

As a professor of political science, it is difficult to teach in an unbiased fashion, especially with students that are fostering their beliefs as part of a college experience. In this way, Scauso takes a different approach—one that embraces biases and open-mindedness.

“Neutrality, to me, is impossible,” Scauso said. “Therefore I prefer honesty and democracy.”

In Scauso’s class, he said he makes his stance on the issues apparent.

“I try to make my opinions very explicit,” Scauso said. “It is important to make the class a safe place.”

To do this, he said every student in class is encouraged to speak, and valuable participation is rewarded with sticky notes, which denoted participation credit. He said the class is a democratic setting where students can counter and support others’ opinions and their own.

His passions are clear to the class, as students have noticed.

“He’s such a great professor. He makes class interesting and cares so much about how students perceive him as a teacher,” Emma Atkinson, a sophomore advertising major in Scauso’s international relations class.

Scauso offered advice for Quinnipiac students based on his diverse experiences.

“Agency is resistance,” Scauso said. “Often we think we have no power because that’s what we’ve been taught.”

Scauso said he believes part of growth and change is resisting the status quo, not obeying it.

While this may seem difficult, Scauso assures us that, “thinking we can start to make the world a better place, in itself, is a form of resistance.”