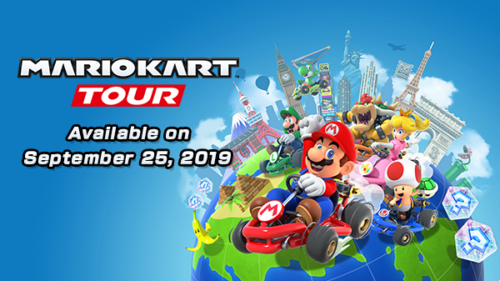 One of the most popular racing games we’ve seen is now available for download for your mobile phone or tablet.

The new app “Mario Kart Tour” came out Wednesday, Sept. 25 and it had millions of downloads within the first 24 hours of release. Nintendo has been teasing this app for the past three years and the wait is finally over.

This game doesn’t have much to it since just being released. There isn’t a wide selection of maps. The maps come from previous Mario Kart games from other Nintendo devices such as the 3DS and Nintendo 64. There is one new map featured and it’s called New York Minute, a map designed after Times Square in New York. Each map has its own variations with different cups as well.

There are a total of 16 cups to play which features three courses to race on and a challenge mode in each course. With each course you can achieve a high score in both the courses and challenges to earn stars to unlock gifts to help you advance in the game. There are also achievements that can be unlocked that give you rubies and stars.

The game features 20 characters, 19 karts and 11 gliders that you can boost up and gain a higher score. You can mix and match characters, karts and gliders to help you have the best point total in the end. Each character, kart and glider depending on the map has a certain tier that acts as a multiplier to give you a better chance at achieving a high score.

Each character in the game even has their own special item they can use. For example, Toad and Toadette have a triple mushroom feature that gives them an ultra speed boost. While Bowser has a big green spiny shell that can run over other racers.

While the game has its positive attributes, there are also some negative ones as well. For starters, the game is a pay to play type of game which means that if you really want to advance in the game, you have to pay to buy rubies or coins to upgrade drivers, karts, and gliders and get a higher score. There is a subscription called “Gold Pass” where you can unlock special items which costs five dollars a month.

Another negative is the controls of the game. Making a Mario Kart game for the phone is quite different from console gaming. There are different settings that you can set to have while playing. There is smart steering which prevents you from falling off course, there’s manual drift where you use your finger to drift your driver and that can cause a speed boost. And there’s gyro handling where you tilt your device to steer the character.

There hasn’t been an online feature yet in the game. You basically play computers that have other users names. You can’t face other people from around the world or even play against your friends.

And of course, there is that dreaded blue shell that comes at the worst possible times. Those are some of the negatives that make the game frustrating to play most times.

Nevertheless, Nintendo is taking their gaming to another level where now people can play Mario Kart on their phones. They can play it from basically anywhere and everywhere that has access to the internet or use of data.

This game is far from complete, developers are adding new content often to make sure the game doesn’t go stale. There are still challenges to complete and the weekly ranked cups to keep competitiveness alive and have people keep playing.

This game has a bright future ahead that is already being used by millions of people already. Once more updates come out the game will be more diverse to play with more characters, maps, challenges and many more features to be added.