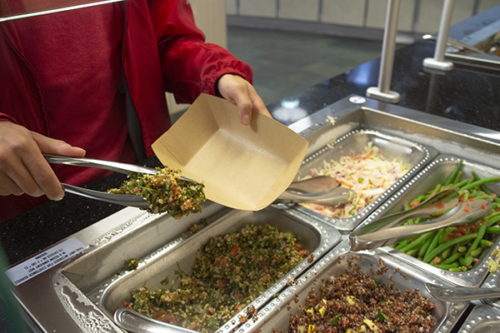 Last spring, I wrote a stinging rebuke of the dining hall. I accused the sushi station of cross-contamination, global create of discrimination and G-8 of being similar to Brett Kavanaugh.

But the press is powerful and bad press brings change. I am truly impressed with the improvements that QU Dining has made since I first complained. 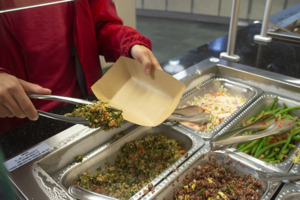 After my article was published, QU Dining reached out to me and offered to meet up to talk about my concerns. I thought this was very proactive, so I agreed to meet. I came to the meeting with a list of concerns which the QU Dining representatives wrote down and appeared to take very seriously. I left the meeting cautiously hopeful. They seemed to care, but at the same time, what could they really do? The dining hall is cramped as it is. I didn’t see a way that they could expand or improve their options with the resources we have.

I returned to school in August after a summer of gorging myself on highly edible food, to store up energy in case the dining hall lacked edible options. I was immediately excited about the prospect of the acai bowl station. While it was more like sherbert and less like the acai bowls I’ve seen on Pinterest, it tasted good, and there were plenty of options for toppings. Plus, it seemed healthy. Acai bowls instantly became a staple of my college diet and prevented me from contracting scurvy due to a lack of fruits in my diet as I feared last year.

One of my largest complaints last year was a shortage of vegan and vegetarian options. I found myself eating a lot of sides. Pork chops would be the main dish, but since I wouldn’t eat pork chops, I would have the sweet potatoes and rice offered as side dishes. This is a great option for one day, but I often left the dining hall feeling unfulfilled and returned to my room to munch on trail mix and eat peanut butter straight from the jar which isn’t a positive habit to get in to.

This year, QU Dining incorporated “Harvest,” a vegan station, of which I have been a huge fan. I am particularly an advocate for the vegan chicken nuggets which remind me of my childhood and the tofu and veggie stir-fry-type dish. I just love having a variety of entrees, not sides, that taste wholesome, rotate every day and do not contain meat.

I also appreciate the efforts of other stations to broaden their dietary horizons. The pasta station now has three different kinds of sauce. The grilled station not only offers veggie burgers but also, Beyond burgers, which are plant-based and meat-free. These are exciting developments, and things that I wouldn’t have thought possible at this time last year.

The York Hill Dining Hall still has some work to do. Since it has fewer stations, there are fewer options and longer lines. Most of the stations, besides the salad bar, involve meat unless you want to kill an hour in the pizza/pasta line. I am hopeful that the new pub will help to increase the variety of options. However, props to QU Dining again because they have implemented a whiteboard for suggestions from students. This gives me a lot of hope because it means that students who are not comfortable writing an anti-QU Dining manifesto for The Chronicle can still have a voice.

And I guarantee you people who are writing on the whiteboard — they are listening. Improvements in the dining hall this year alone are all the proof you need.

I encourage all students who feel dissatisfied with some aspect of Quinnipiac to make a stink. Don’t sit in your room and fume about it. Don’t take to Twitter and vent about it. What I have learned is that QU Dining doesn’t always follow you on Twitter. The people who have the power to make changes in your student experience might not even have a Twitter account, but they do have email inboxes, offices with open doors and multiple copies of The Chronicle.

Write a letter, write an article, make a phone call, write on the whiteboard, show up at an office, but don’t just sit there dissatisfied. It’s OK to say “Kava-nope” when G-8 lets you down.