A night at the Beacon: Tedeschi Trucks Band continues residency in fine form 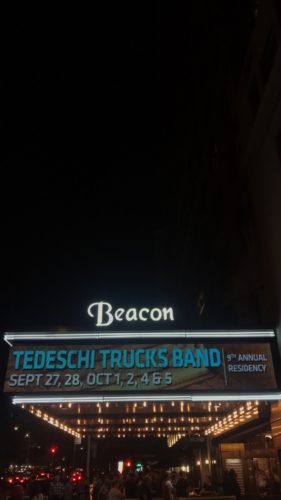 Just a few blocks from Central Park, the Beacon Theatre stands out from other New York City venues. It seats 2,984, massive for a play, but relatively small for a concert. So you could imagine what it was like to see acts like Queen, Bob Marley and the Grateful Dead for less than $10 in the late ‘70s.

In 2019, the 90-year-old theatre has managed to preserve its mystique, a feeling that concerts in the modern age can still be an experience from start to finish. The Tedeschi Trucks Band, currently in the middle of its ninth annual Beacon residency, has established itself as one of the venue’s trusted partners.

On the first night of October, the group did not disappoint.

Derek Trucks, nephew of the late Butch Trucks (Allman Brothers Band), is a true virtuoso. He’s the leader, but his wife, Susan Tedeschi, takes center stage. She brings a soulful elegance to the group, something it could not function without. Tedeschi Trucks is an ensemble, featuring a horn section, two drummers, pianist and backup singers. If one is searching for a full, round sound, then look no further.

The night started off on a high note with a tight, powerful version of “I Want More,” followed by the smooth, bluesy “Do I Look Worried.” Covers presented themselves early, as the group gave a nod to two Bob Dylan songs, “Down in the Flood “ and “Going, Going, Gone.” Of the 16 songs played, eight were covers, ones that ranged from Dylan to the Allman Brothers.

Those in the audience were treated to a handful of guests throughout the night. Nels Cline, guitarist for the alternative rock group Wilco, joined the stage for a few numbers. Most notable was their rendition of Derek and the Dominoes’ staple, “Bell Bottom Blues”. Memphis rocker Luther Dickinson also joined for a few songs.

The second generation of many rock legends joined the stage, too. Amy Helm, daughter of the Band’s Levon Helm, opened and joined in the encore, as did Grahame Lesh, son of the Grateful Dead’s Phil Lesh.

It wouldn’t have been a Tedeschi Trucks show without a rightful ode to the Allman Brothers. The group’s version of “Don’t Keep Me Wonderin’” was a definitive highlight of the night.

While it’s exciting to reminisce on those who have graced the Beacon over the decades, it’s worth considering how we’ll one day look back on Trucks and his band. It will certainly be for the music, but maybe more importantly, it will be for providing audiences with a true show from start to finish. There are no frills at a Tedeschi Trucks Band show. It’s just showmanship and mutual respect between talented musicians.

Nowadays, that’s something we can all appreciate.