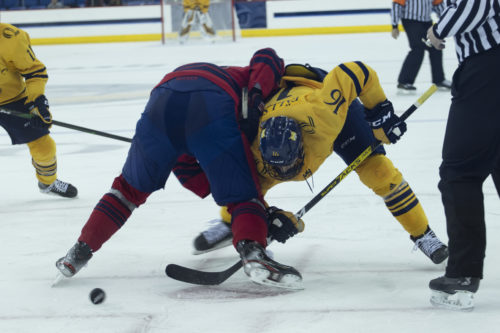 “Chaos” was a word used in the press conference by Quinnipiac head coach Rand Pecknold to describe the 81-shot affair that took place this Sunday afternoon.

The Quinnipiac Bobcats began the 2019-20 season this Sunday, Oct. 6 with their first exhibition game at People’s United Center against the Brock Badgers of Ontario, Canada. The Bobcats tied their first out-of-conference opponent 4-4 in an abnormal hockey game that had an unexpected result following the conclusion of overtime. 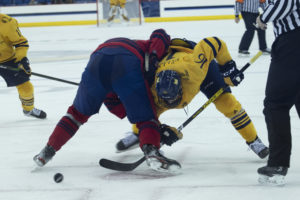 [/media-credit]The style all night was unconventional, and at times the game was sloppy and chippy between whistles. Part of the reason the game was so sloppy was because of how often both teams had to use special teams.

There were a total of 21 penalties in the game, with eight of them taken by the Bobcats, The penalties really opened up the ice for opportunities since both teams were either on the power play so often. There was a lot to digest from today’s action for Quinnipiac, and Pecknold is trying to evaluate both the pros and cons from this year’s first exhibition contest.

“I thought the penalty kill was OK,” Pecknold said. “I think we did some good things but I think everything needs to be improved on. The power play was chaos, we had guys trying to do way too much, going rogue and playing out of control.”

Shots were 57-24 in favor of the Bobcats, and that may be what Pecknold was hinting at when he said the players were “rogue and out of control.”

Often times, Quinnipiac forced that got blocked, and then fired one or two more quick, low-percentage shots on the crease. The Bobcats were often impatient on the power play, and seemed to be forcing multiple, low-quality shots rather than waiting for the right chance. 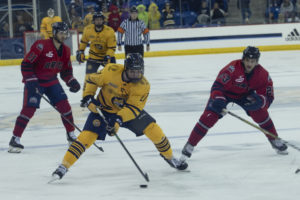 [/media-credit]Quinnipiac came out of the gate firing from all cylinders, however Brock got the first goal to go. Just five minutes into the game, the shots were 8-2 in favor of Quinnipiac, but Brock led 1-0.

The Bobcats didn’t do themselves any favors following the goal when sophomore forward Wyatt Bongiovanni took a hooking penalty and hit the post immediately after leaving the penalty box. That was followed by sophomore forward Ethan de Jong just missing out on a goal when he hit the crossbar. Despite the Bobcats doubling the Badgers in shots, they went into the final minute of the period down one goal.

That all changed with just 17.6 seconds remaining in the first period when Bongiovanni got another power-play chance but didn’t waste this one. He didn’t let another get away from him when capitalized on this scoring chance from the left dot to tie the game right before the end of the period.

As the game continued, so did the same trends. The Badgers came out hot in the second period as freshman defenseman Matthew Barnes had a beautiful transition goal on the breakaway, beating junior goaltender Keith Petruzzelli. Junior forward Brayden Stortz scored roughly 10 minutes later and gave the Badgers the two-goal lead.

Quinnipiac got another power play and woke up after having just two shots in 10 minutes. The Bobcats capitalized with a goal from senior defenseman Karlis Cukste on the man advantage.

The Badgers got the last goal of the period from freshman defenseman Jordan Sambroo with just 12.6 seconds remaining, giving the game another goal in the last 30 seconds of the period.

Things got chippy before intermission with a large scrum, and the intensity carried over. The energy in the stadium was anything but one of the exhibition games.

“The game was crazy overall,” Pecknold said. “I think Brock did a good job of capitalizing on the few chances they did have. It was just one of those games that don’t happen often where I would look up at the shots and its 37-9 but we were still losing 3-1,” Pecknold said. 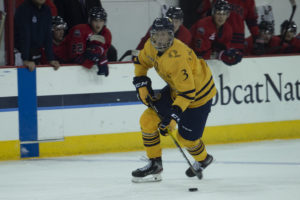 [/media-credit]Things got wild in the third period when the Bobcats came out firing and eclipsed over 50 shots. Following a five-minute major and a game misconduct given to Sambroo, the Bobcats were able to level the scoring. Senior forward Nick Jermain pulled the Bobcats within one with a no-look, highlight-reel backhander. The illegal hit ended up favoring the Bobcats even more when they secured a 4-4 deadlock with 12 seconds left in the period.

“We just had to stick with it,” senior forward and newly-named captain Nick Jermain said. “At that point you just have to stick with the plan, because I think we could have had eight goals tonight but that just didn’t happen for us.”

After a very quiet overtime period and some strong goalie play from both freshman goaltender Evan Fear and sophomore goaltender Mario Cavaliere, the game ended in a 4-4 tie. A lot to learn for both teams who have a long season ahead of them. Quinnipiac will take on AIC next Friday, Oct. 11, at the People’s United Center starting at 7 p.m.