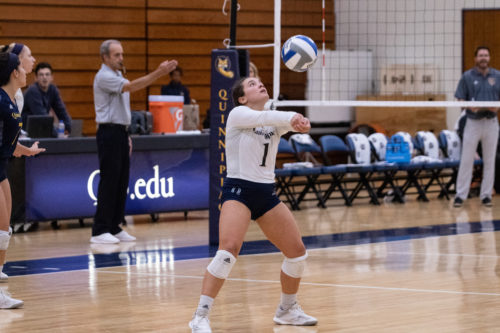 Quinnipiac volleyball head coach Kyle Robinson spoke about the emotions of the win not only the players on the team, but the friends and families of those players as well. 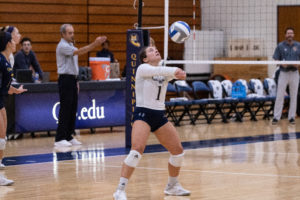 [/media-credit]“It felt really nice,” Robinson said. “The girls worked really hard and we had a little adversity in that third set, and it is really nice to see us fight through adversity to get the win. The first win at home definitely felt nice to show this crowd, since we really wanted to show everyone how much work we put in for them and how appreciative we are for them to show up.”

Sophomore outside hitter Maggie Baker led the Bobcats offensively with 15 kills and 10 digs. On the defensive side, it seemed as if senior middle blocker Kaleigh Oates and sophomore middle blocker Lydia Jones were all over the floor, with Oates recording four blocks and Jones tallying two of her own.

The Bobcats came out with an attitude, as they jumped out to a commanding 9-3 lead early in the first set. To compliment the offense, the Bobcats displayed stellar defense, especially by way of senior outside hitter Lauren Miller, Oates and junior right side hitter Morgan Sherwin

One thing that Robinson talked about was how everyone on the team made each other better – whether on offense or defense – and he’s noticed this trend with the team all season.

WVOL: The Bobcats win the first set 25-20 against Iona. The Bobcats had nine kills, 42 attacks and six assists, while the Gaels had six kills, 41 attacks and five assists. There were many things that happened in this first set, but what really stood out was the Bobcats defense.

“I’m proud of this team and how they are able to make each other better,” Robinson said. “I’m proud of how Lydia (Jones) stepped up, as well as those who didn’t play today. All of the girls who didn’t play made those playing better, so we’re working as a really nice unit right now and that is what is making me proud of coaching this team.”

However, as the Bobcats got a little too comfortable with their lead, the Gaels started to capitalize on missed opportunities and mistakes by the Bobcats.

It was the Bobcats impressive on defense that led them to victory. Blocking shots and forced shots out of bounds throughout the entire match helped Quinnipiac hold the Gaels to under .050 hitting percentage well into the match. Because of this, the Bobcats were able to jump out to a 16-10 lead, winning the first match 25-20.

WVOL: The Gales win the third set 25-15, with the Bobcats having 25 kills, 118 attacks and 20 assists, while the Gaels had 27 kills, 124 attacks and 26 assists. One thing that stood out for the Bobcats was how well they were able to contain the Gaels aggressive offense,

Going into the second match, the Bobcats tried to replicate their strong defense and aggressive offense, but it seemed as if the Gaels had Quinnipiac figured out all along, as they jumped out to an early 10-7 lead.

After a timeout, it seemed as if the Bobcats came out with a different mindset, as the team started to find its rhythm, and eventually regained the lead 14-13. Without looking back, the Bobcats ended up taking the second match 25-16, with only one more set needed to sweep the Gaels.

The Bobcats dropped the third set to Iona, which came out with its foot on the pedal. A 17-8 lead for the Gaels seemed possible to overcome, but in the end proved to be too much for the Bobcats.

Going into the fourth set, Quinnipiac was looking to close things out. The players wanted a dominant win not only for themselves, but for their friends and families who came from all over to watch them play. While down 13-12, the Bobcats realized the importance of this game and dug deep, turning the tides.

After fighting with the Gaels for so long in the match, the Bobcats were finally able to tie the game at 15 and play the defense that they did for the first two sets. The Bobcats play proved to be too dominant for the Gaels, and ended up winning the set 25-19.

The Bobcats look to carry this momentum into their next game against the Manhattan Jaspers on Sunday, Oct. 6 at 1 p.m. at Burt Kahn Court.