Quinnipiac’s hands were full with No. 13 Liberty in town 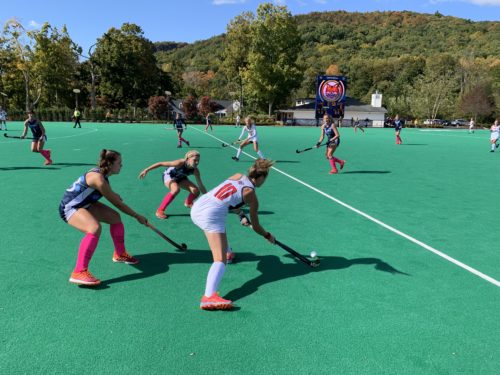 The Quinnipiac Bobcats field hockey team met up with No. 13 Liberty University on the field in Hamden where the nationally ranked Flames took the 5-1 win. With the loss, Quinnipiac moves to 3-7 overall and 1-2 in Big East play.

Liberty did not waste any time as it came out on the field sharp. The Flames got on the board first with a goal from freshman forward Daniella Rhodes in the last few minutes of the first quarter.

The Bobcats got out of the first quarter without giving up another goal, but in the second quarter, Liberty managed to score three goals over the course of 2:54. 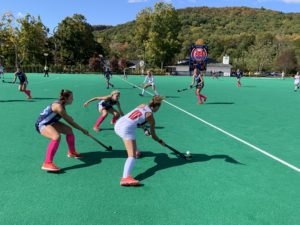 [/media-credit]Liberty’s sophomore midfielder Maddie Hosler struck first with a goal in the 22nd minute off a penalty corner. Sophomore forward Charlotte Vaanhold found the back of the net in the 24th minute, and two minutes later, Vaanhold stretched Liberty’s lead to 4-0 after she scored a second goal on the reverse slap.

Liberty outshot Quinnipiac 15-1 during the first half and totaled 10 penalty corners to Quinnipiac’s zero.

Down 4-0 after the half, the Bobcats came back to the field with a bit more spark. Quinnipiac held Liberty to just one goal at the end of the fourth quarter. Quinnipiac also cut down on shots allowed, holding Liberty to just five as they tallied three of their own.

“We talked a lot about communication on the field, and how to defend better,” said senior midfielder Inès Ruiz Martinez. “We were having some trouble marking and finding each other’s players.”

Ruiz Martinez finished the game with an assist and two defensive saves. She is near tying her career-high of five assists from her freshman year, and also has a total of 16 career defensive saves.

The Bobcats continued their strong second half performance when graduate midfielder Bianka Strubbe netted a goal in the 45th minute. Her goal came off a penalty corner from redshirt sophomore defender Alyssa Watson. The ball came to Inès Ruiz Martinez at the stick stop before Strubble sent it home. 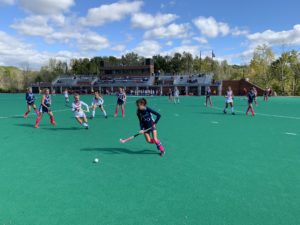 [/media-credit]This goal marks Strubbe’s fifth of the season, which gives her 12 points, keeping her among the Big East leaders.

“I’m really proud of our DPC unit,” head coach Becca Main said after the game. “Liberty’s APC’s are amazing and you really didn’t get to see it today because I thought our DPC’s outdid their APC’s.”