Bobcats steal an overtime win from Saint Peter’s at home 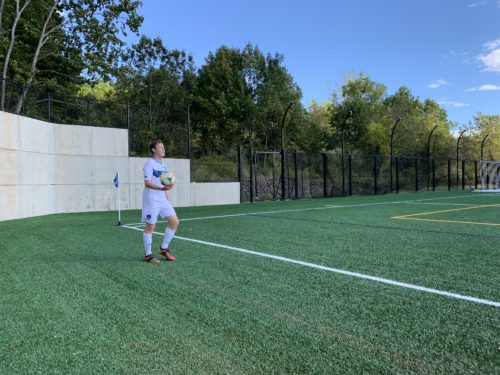 The Quinnipiac Bobcats secured a 2-1 win against the Saint Peter’s Peacocks on Wednesday, Oct. 2. The overtime epic lifts the Bobcats 3-3-2 and knocks the Peacocks down to 3-5 in the first game of MAAC play.

The game began slowly, as Quinnipiac controlled possession and kept the Peacocks attack at bay. That was the trend for the majority of the game, as Quinnipiac often found themselves knocking at the door, but to no answer.

The game remained knotted at zero until senior forward Eamon Whelan put the Bobcats in front with a composed shot from deep inside the box on a cross into the middle. He was able to corral it and put it off the keeper, scoring on the rebound. With five minutes left, it was the Bobcats’ game to lose. 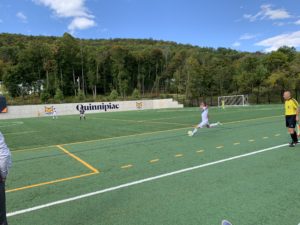 [/media-credit]Junior Peacock midfielder Alex Garcia decided to play spoiler, guiding in a headed ball from the foot of junior midfielder Jordan Jowers with a mere 45 seconds remaining in the second half, sending the taxed players into overtime.

“It’s certainly disappointing to drop a goal there with seconds left, but we’ll have to move on and that’s what we told them in the huddle,” Quinnipiac head coach Eric Da Costa said about regulation ending.

Three minutes into the second half of overtime, Quinnipiac freshman forward Brage Aasen brought the ball forward, cut through defenders, and whipped a low cross to fellow freshman forward Tomas Svecula to close out the game and send his teammates to the showers.

The Bobcats found themselves bottled up as the Peacocks formed a brick wall around their 18-yard box and did everything they could to keep white shirts out. The 11 shots on target that Quinnipiac put together are misleading, as the vast majority of them were from outside the box or desperation headers at the end of the game.

Nonetheless, Svecula found his way through. 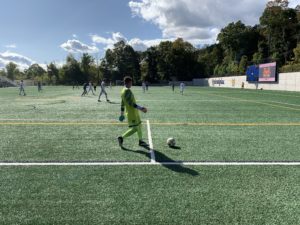 [/media-credit]“The only thing that was in my mind was to score,” Svecula said about the game-winner. “The team needs that, that’s my job.”

The referees were a hotly debated crew, as both sides – players and coaches alike – frequently disagreed with their calls and decisions.

“I was certainly frustrated with the events,” Da Costa said. “There was a foul on Tomas that should be called. I don’t see it, but the referee made a decision and at the end of the day we still should have defended that better.”

The Quinnipiac defense was able to find success on the defensive side, as it forced the opponent offside six times during the contest, which put an end to any scoring chance the speedy Saint Peter’s attack could conjure.

“The shape and the recovery was all really good, so it’s just coordination and experience,” Da Costa said when asked about senior defender Conor McCoy. “It helps having an experienced guy with some leadership back there to try to coordinate it.”

Next for the Bobcats is a trip to Manhattan to take on the 1-5 Jaspers.