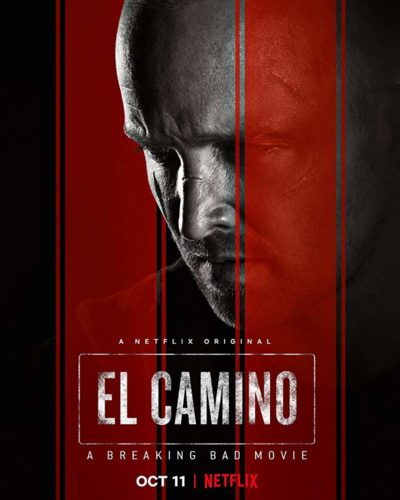 The full trailer for “El Camino,” a Netflix Original movie, was released on Sept. 24, and fans of the award-winning television show, “Breaking Bad,” should be thrilled and hopeful.

“Breaking Bad” took the world by storm for over five seasons from 2008 to 2013. It was quickly regarded as one of the best television shows ever made, covering the journey of Walter White (Bryan Cranston) and his transformation from a dorky chemistry teacher to a cold-hearted crystal meth kingpin. Jesse Pinkman (Aaron Paul), Walt’s assistant/friend/pawn throughout this journey, became as pivotal to the plot as Walt did by undergoing his own transformation, from a dropout druggie to a tough mafioso. “Breaking Bad” won a 2014 Golden Globe for Best Television Series after the finale in 2013, just one award among the 110 awards won by the show.

So, in case anyone forgot, this show was nothing short of a masterpiece.

The last time fans saw him he was breaking out of Jack Welker’s (Michael Bowen) white supremacist gang after suffering beatings and confinement for several months. White saves him from the compound and bleeds out nearby, while Jesse rams through the fence in a truck screaming with joy at his newfound freedom.

For many it was a satisfying end to a remarkable series.

Jesse is the loose end left from the original show. The trailer gives viewers chills every single time it is watched. Jesse finds his way to his friend Skinny Pete (Charles Edward Baker), and holes himself up there. The audience sees the sheer damage done to Jesse, his face bruised and contorted, his back covered in lashes, looking like an animal that had been kicked one too many times. It takes Skinny Pete several seconds to even recognize his best friend when he opens the door. Badger (Matt L. Jones), Jesse’s other friend, takes off his hat at the sight of Jesse, like he was at a funeral.

In a way, Badger was.

Jesse symbolically “dies” in “Breaking Bad,” and whoever he is in “El Camino” simply cannot be the same person he was. “El Camino” means “the way.” This new movie is Jesse’s effort to find his path after “dying” in captivity. He underwent loss on a level no one could match. Both of the women he loved, Jane Margolis (Krysten Ritter) and Andrea Cantillo (Emily Clara Rios), died within eyesight and in connection to him.

But to analyze this further, Jesse took a shower.

Water is often symbolic of a cleansing, and a sign of a new life similar to a baptism. Jesse visits a river, eerily familiar to where Mike Ehrmantraut (Johnathan Banks) died, with an unknown figure standing aside him.

Even the music agrees with this point.

The song played in the trailer is “Black Water,” by Reuben and the Dark. It is a morose song about a man who looks at himself in the mirror and realizes that he has changed beyond belief. The lyrics “I saw my face in the mirror, though I know I’ve changed, though I look, much the same” speak to this point. The lines, “grace in the black water bathe my soul, and tell my heart, I told you so,” also speak levels about Jesse. He is convinced that he is the bad guy, he has told himself this for years despite Walt’s assurances in previous seasons that everything bad had to happen, and that he never had a choice. Jesse believes this effort to purify his soul will not work because the only water available to him is this “black water.”

Jesse is trying to move on, but several parts of the trailer indicate he is still very troubled. The sound of a police siren sends him clutching a gun or hiding in a corner. He cannot escape his past as he is hunted down by the law. Nostalgia is triggered a couple times as well, recreating scenes using similar camera angles. Part of the famous “Run” scene from “Breaking Bad” is recreated when he is walking at night in the same outfit in the streets, and the hooked photo of Andrea and Brock Cantillo (Ian Posada), her son, looming overhead in a scene similar to the one in “Ozymandias,” one of the final three episodes in the “Breaking Bad” saga.

All in all, this just looks like a masterpiece. Vince Gilligan, the creator of “Breaking Bad” and creator of “El Camino,” knows the story better than anyone else. This trailer simply reinforces the idea that Gilligan is ready to make another splash in this remarkable storyline.

The silence of the trailer sans music is broken in the last ten seconds.

“You ready,” an unknown voice asks.