Business is not boomin’ 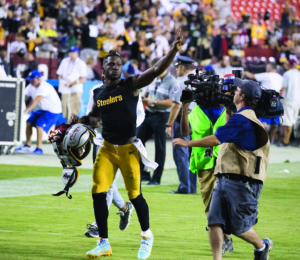 Antonio Brown waving off against the Redskins

Imagine being known as the best wide receiver in football for almost a decade and being cut by two teams before Week 3.

For Antonio Brown, this is exactly the case. After not playing in Week 17 for the Pittsburgh Steelers of the 2018-19 season, his career started a downward spiral with levels of drama that not even legendary wide receiver Terrell Owens could rival.

On Sunday, Sept. 22, Brown, 31, tweeted he, “Will not be playing in the NFL anymore these owners can cancel deals do whatever they want at anytime we will see if the NFLPA hold them accountable sad they can just void guarantees anytime going on 40m 2 months will see if they pay up!”

Brown is referring to the guaranteed money that he lost in the past month. It all started after he ended up in an Oakland Raiders uniform in exchange for a third and a fifth round draft pick last March. At that point, Brown’s future seemed pretty clear-cut: he would play for the Raiders under the three-year, $54.125 million contract that he had and continue his career as an All-Pro wide receiver.

At this point, everything seemed to be going according to plan; Brown even tweeted a photo of him and Derek Carr, the Raider’s quarterback, captioned, “Love at first sight.” Then, on July 25, he began his downward spiral.

This was the day that Brown missed his first week of training camp. Brown suffered frostbite on his feet in a cryochamber, placing him on the non-football related injury list.

Sure enough, this absence did not stop Brown from creating a scene during his first day with the Raiders. As the rest of the players rolled into their parking spots for the next four weeks, Brown decided he would rather fly into Napa Valley, California, on a hot air balloon.

While each of these inconveniences distanced Brown from his team, the controversy was just beginning. Four days later, Brown filed a grievance against the NFL, petitioning to wear the helmet he has worn his entire career for another year, despite the helmet having been proven unsafe. Ultimately, Brown’s second grievance was denied and finally he was ready to join Raiders camp with a brand new helmet.

Amidst all of the drama, Jon Gruden stood by the controversial receiver. In an interview after the team’s preseason Week 2 game against the LA Rams he stated “I support this guy I think that’s what needs to be said.” Despite the off-field issues, the Raiders’ front office still seemed to support Brown until the issue on Aug. 18. After all, he was a first ballot Hall of Fame caliber wide receiver.

This was the day that Brown decided to show the NFL world that the league is better off without him. With all of the previous off-field drama, Brown decided to spread the wealth and bring the issues onto the field. He threatened to assault Mike Mayock, due to the fine that Brown had received for skipping practice almost a week earlier. During this confrontation Brown also called the first-year general manager a “cracker” per Josina Anderson of ESPN.

This obvious representation of racism has no place in our game, giving me no problem with the eventual cutting of Brown from the Raiders. After this, on Sept. 7, Brown signed a one-year $15 million contract with the New England Patriots, $9 million of which was guaranteed. And after being accused in two separate cases of sexual assault, he was cut by the Patriots as well.

With both teams voiding his guaranteed money, this shows the affliction Brown is to the league. Even after his stellar performance in Week 2 against the Miami Dolphins, the Patriots still felt that the bad outweighed the good.

I am the first one to admit that Brown is extremely talented, but after the way he has acted throughout the last year, the league is better off without him.

He single-handedly ruined the Raiders’ locker room and claimed he will no longer play in the NFL after losing his guaranteed money.

As shown on the NFL’s website, some of its core values are as follows, “Respect, Integrity, and Responsibility to the team.” Based on this, Brown has violated the very fabric of the league as we know it. He’s shown zero respect to both the league and his own team’s front office. If he respected the powers above him, he wouldn’t have filed multiple helmet grievances after the initial decisions. If he respected his team, he wouldn’t have missed the first two weeks of camp. And if he respected his general manager, he would never have even thought to threaten him, let alone call him a racial slur.

Even while Brown is apparently “Done with NFL,” he is still giving the league a major headache. On Sept. 26, Brown got into yet another fight. Eric Weddle, safety for the Los Angeles Rams, just had to respond after Brown’s outrageous tweet. Brown claimed that “the game need me I’m like test answers [sic].” Weddle retorted stating “Don’t need to. Isn’t on a team.” Weddle sums up what the rest of us are thinking perfectly: Brown isn’t even in the league, we don’t need to hear about him.

This year has been a disparaging one for NFL. From Kareem Hunt to Tyreek Hill, Brown is just another addition to the considerable strife that the NFL has faced in the past year. Not to mention the early retirements of legendary tight end Rob Gronkowski and Pro Bowlers Andrew Luck and Doug Baldwin. These are ambassadors of the game that the league will definitely miss—unlike the drama queen Brown.

As a fan of football and the NFL, I think I speak for us all when I say that Antonio Brown has become a distraction that we no longer care about.