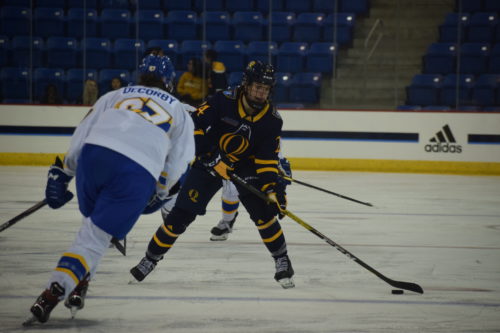 A quiet Saturday afternoon at the People’s United Center quickly turned into an intense exhibition game that kicked off the 2019-20 Women’s ECAC Hockey preseason. The Quinnipiac Bobcats defeated the Ryerson Rams 5-1 in the first out-of-conference exhibition game.

There was no shortage of offense for Quinnipiac, as the Bobcats netted three goals in the first seven minutes. Those goals came from sophomore forward Lexie Adzija and sophomore forward Katie Huntington at even strength, and then junior forward Brooke Bonsteel on the power play.

Even though this was only an exhibition game, it was extremely important for Quinnipiac to start the season on the right foot according to head coach Cassandra Turner. Turner was visibly proud of how her players attacked right out of the gate. 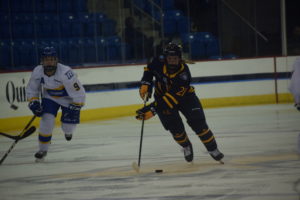 [/media-credit]“We talked a lot about attacking in transition,” Turner said. “I thought we were attacking pretty quick in the offensive zone, and I think our team had a lot of energy,” Turner said.

The Bobcats completely dominated the first 10 minutes of the game. Ryerson was in its defensive zone for the majority of the period, and the few times the Rams got the puck out past the blue line they couldn’t settle in for long on offense.

However, following a timeout and a goaltender swap, the Rams style changed for the better. Ryerson switched sophomore goaltender Natalie Thompson with senior goaltender Rachel Seeley, which drastically improved the Rams play. In the final 10 minutes of the first period the Rams’ defense was solid and didn’t concede another goal. Ryerson also got the majority of its shots at the end of the period, but Bobcats senior goaltender Abbie Ives wasn’t phased and stopped all four shots.

This type of play rolled over into the second period for both the Bobcats and Rams, and things eventually became stagnant. Quinnipiac couldn’t get much going on offense and was held scoreless in the period, while Ryerson was able to get a game-high seven shots on net and finally got its first and only goal of the game. The Ryerson goal came from freshman forward Emily Baxter, and it seemed like it was a wake-up call for the Bobcats. Turner didn’t seem to think that goal was the worst thing for her team.

Despite the fight from the Rams, the Bobcats allowed just one goal in the period and got 10 shots on net despite not scoring themselves. 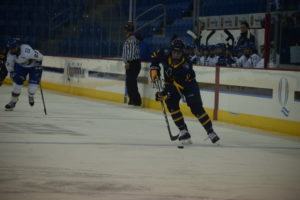 [/media-credit]In the third period, action began to pick up on both ends as both teams played a very complete period. The major difference for the Rams was the goaltender switch from Thompson to Seeley. Seeley saved 24 of 26 shots from the Bobcats and kept her team in the game while Thompson struggled by making zero saves in just seven minutes.

Seeley was shutting down the Bobcats from the moment she came into the game, but that changed when Bonsteel got her second goal of the game. An extra skater came on for the Bobcats following a delayed penalty, and Bonsteel wasted no time by capitalizing with a snapshot from the slot.

Bonsteel scored a lot more her freshman year than sophomore year, and before today’s game Turner asked her to shoot five times, so Bonsteel did just that. Bonsteel seems to have found out that when you put the puck on net, good things tend to happen.

Bonsteel’s second goal on her fifth shot was followed by the final goal for Quinnipiac shortly after. The Bobcats received another power play 12:25 into the period and freshman forward Sadie Peart put a one-timer home making this a successful first exhibition game for the Bobcats.

Coming up for the Bobcats is an exhibition home-and-home against the Providence Friars. Quinnipiac heads to Providence on Oct. 4, for the road game, and then the two teams will swap arenas the following night and play at the People’s United Center on Oct. 5.