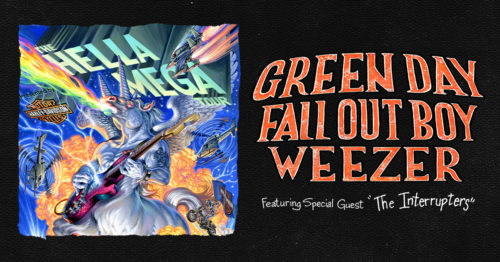 The tour is set to begin on June 13, 2020 in Paris, France and  will come to the United States on July 17 starting in Seattle, Washington. The three bands each released singles along with the tour announcement.

The tour will be stopping to play at Citi Field in New York on Aug. 22, and then will be stopping at Fenway Park in Boston on Aug. 27. Each of these shows will be opened by The Interrupters, a ska-punk band based out of Los Angeles.

Green Day’s single, “Father of All…” is the precursor to a new album, “Father of All Motherfuckers,” which is set to be released on Feb. 7, 2020. This release comes 25 years after the release of their first big album, “Dookie” and is their first release since “Revolution Radio” in 2016.

Fall Out Boy’s single, “Dear Future Self (Hands Up),” is a collaboration with Wyclef Jean and is set to be a bonus track on their second volume of greatest hits. “Greatest Hits Believers Never Die Volume 2” is set to release on Nov. 15. Fall Out Boy inducted Green Day into the Rock and Roll Hall of Fame in 2015 but had never performed alongside them.

Weezer’s single “The End of the Game,” is the lead single on their new album, “Van Weezer,” and is their first release since “The Black Album” that was released in March. It is set to release May 15, 2020.

Some fans have taken to Twitter to complain about the hefty price tags that came along with the VIP packages. The Rainbow Unicorn package costs around $650 but does not include a meet-and-greet. However, it does have access to a lounge with snacks, a backstage tour and free merchandise including a commemorative laminate, a water bottle, and a drawstring backpack.

“We really wanted to have the biggest rock tour of the year,” said lead singer of Green Day, Billie Joe Armstrong, when talking about joining forces with Fall Out Boy and Weezer in an interview with Rolling Stone.