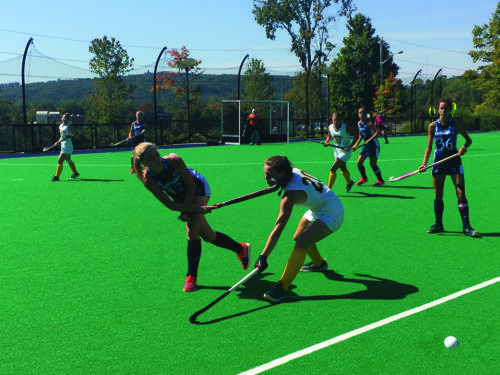 The freshman midfielder grew up in Maastricht, the Netherlands, playing field hockey since she was six years old. Her mother and older brother also played field hockey and were a big reason why she’s become so crafty on the field.

However, her career in Europe is on hold while she pursues a degree in graphic and interactive design. In the Netherlands, there’s isn’t an option to play collegiate field hockey, so Veldhorst moved to Hamden, Connecticut to continue playing the sport she loves.

“They gave us a list of 15 players in the Netherlands that were looking to come to the States,” Main said. “We did our research on what clubs they played for and we ranked them by their clubs before we even started watching them, and she came from the most dynamic, most high-level club. 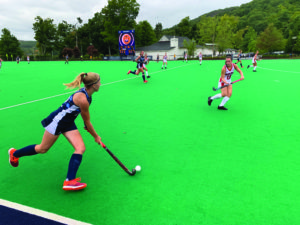 [/media-credit]“Then we went through and ranked them by video and she came out fully on top. So I went after her right from the start and we just clicked on Skype … She fit so nicely in what we were trying to do that, we put the full press on her.”

Assimulating into American culture was not difficult for Veldhorst, especially with the buddy system that the field hockey team implemented. Each first-year Bobcat is paired with an upperclassman in the spring before they arrive.

The newcomer is paired with someone who the coaches believe will be a mentor and help with adjusting to college. For an international student, Main stressed that having another international student advise Veldhorst was essential to her feeling comfortable with being away from home.

Senior midfielder and 2018 NCAA Statistical Champion Inès Ruiz Martinez was once in Veldhorst’s shoes, traveling across the Atlantic Ocean from Madrid, Spain. This past summer when the team got together, Martinez was Veldhorst’s buddy.

“As international students, since we have the experience, I try to make it as comfortable for her as I could,” Martinez said. “She was actually my buddy, so I got to meet her and spend some time with her. I just wanted her to know that this is an amazing opportunity and wanted her to take advantage of it.”

In addition to Martinez being a mentor, Veldhorst looks up to graduate student midfielder Bianka Strubbe. Strubbe, 24 years old, has become the “mom” to everybody on the team, as Main put it.

On the field, Veldhorst doesn’t see the age differences, though. She knows she can learn a lot from the upperclassmen, but is comfortable in games. She’s always played with older players, including her brother, who was two years older than her.

That said, the older players in the United States are far more physical, something Veldhorst is not used to yet.

“They’re strong [in the United States], so I often fall in the games because they push me and I’m not used to that,” Veldhorst said. “And then I get so frustrated. It’s so annoying because I’m not used to it … I like the way of playing in the Netherlands more because it’s more fair. I don’t like pushing and stuff. It’s funny because in the Netherlands, I was always the one who pushed everyone away. Like here I can’t do that because everyone is stronger than me.”

Despite the physicality, Veldhorst has found early success with the team. She’s started all seven games, played at least 50 minutes in each of the past five games and tallied her first collegiate goal against Sacred Heart.

Staying on the field for the majority of the games has been the key to her success. Veldhorst plays forward at times, and a typical forward shift ranges between 7-11 minutes. Veldhorst, however, would take a 14-minute shift, a short break and be ready to go back on the field. 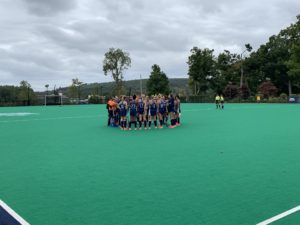 [/media-credit]Playing the midfield requires Veldhorst to run a lot more in a different manner. Main knows she’ll be successful, though, as she is one of the three fittest players on the team, according to Main.

“Her worst is still headlights above a lot of the other players on the field,” Main said. “It’s really nice to see that she’s able to make executive decisions in the moment that are very quick. And when you’re fit like her, you don’t have to worry about being too tired to make a decision.”

Going forward, Main plans to keep playing Veldhorst as a midfielder rather than a forward, her natural position. The transition from forward to midfield came about because Main believes Veldhorst is most effective with the ball and being in the midfield gives her the chance to touch the ball often. She has tripled her touches since changing positions, according to Main.

As she continues to improve with cuts and movement off the ball, Main believes Veldhorst can touch the ball six times as much as she did as a forward. That will take time, since Veldhorst is accustomed to the forward position, but Main is confident that she will grow into the midfield.
Main knows how talented Veldhorst is and is allowing her to have freedom in her new position despite being a freshman.

“She still has a lot to learn there, but we want her to let her style show through,” Main said. “She keeps saying, ‘Should I do this? Should I do that?’ And we keep saying, ‘It’s your position, you make it fit your style. You can put your style and do whatever you want on it.’”