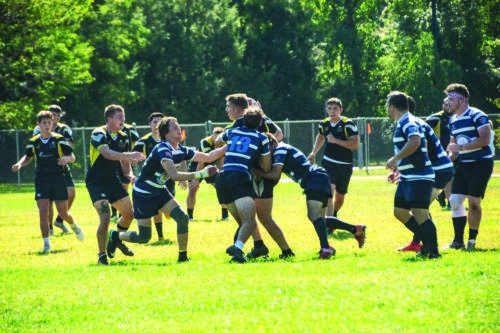 Carly Klimek has been playing club sports since her first year at Quinnipiac University in 2016. But when she stepped onto the field for the first game of her senior season, something was noticeably different.

For the first time ever, Klimek’s club soccer uniform was representing Quinnipiac.

“When I was a freshman this club team had kind of just started, so it was all new,” Klimek said.
Quinnipiac’s women’s club soccer team was new then and it’s new again now. There are 10 club team being reborn this year, each now recognized as affiliated clubs of Quinnipiac.

Soccer isn’t the only club sport benefiting from the new affiliation. For example, the team formerly known as New Blue Rugby is now the Quinnipiac men’s club rugby team. The team decided to keep the crest of New Blue Rugby on its jerseys, but now represent Quinnipiac’s brand new club sports logo with pride as well. 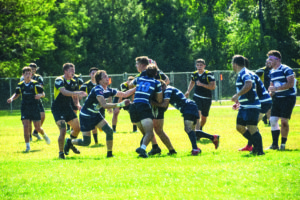 [/media-credit]“The groups weren’t recognized by the university, so they did not have the Quinnipiac name associated with their group,” Associate Athletic Director Mike Medina said. “Now that they’re under university affiliation, they can use Quinnipiac – they have their own logo that we’ve created for them, and we’ve created our own brand identity for club sports.”

The inspiration for finally affiliating the clubs with the school came from students. The athletes participating in club sports were speaking out, expressing their desire to become affiliated with Quinnipiac, and eventually they won the university over.

“I think it’s been a huge student push,” Medina said. “There’s been so many athletes here who want to continue to play the sport that they played in high school. And, not all of them are talented enough to play on a Division I team, so club gives them that opportunity to play, represent the university, continue the sport that they love and they get to play it at a very high level.”

As the program looks ahead to the future and makes attempts to grow, administration also recognizes that it’s early on in the process and steps in when needed.

“Unfortunately, we’re in the infancy stage right now,” Medina said. “I think the university investment has been really, really strong, both financial and in terms of allowing the students to have the freedom to be strong leaders of their organization. They expanded our recreation department by another full-time professional to help us with the launch of club sports for this year, which has been fantastic.

“But each team is also receiving financial support from the university as well, which I think helps them get off the ground. They had to buy all new uniforms this year, they had to understand what it means to be under the umbrella of Quinnipiac University, and I think the financial commitment that the university has made has been fantastic.”

The efforts by the university don’t go unnoticed. In the women’s soccer club’s first game this season, it played a Connecticut College team that seemed a step or two behind Quinnipiac.

For one, Quinnipiac’s players all wore matching, professional jerseys, helping the team appear official and organized. On the other bench, Connecticut College’s players were wearing t-shirt jerseys with quality that you could recreate at home. Some looked old, some new. Others had no numbers, some lacked a last name. One girl even took the field with a blue pinny.

Medina noted that Quinnipiac’s financial involvement and commitment shows on the field, and it fills administrators and athletes alike with a sense of gratefulness.

Enjoyed an afternoon of getting to know @carly_klimek, Mike Medina and others involved with the creation of club sports. Players seemed thrilled to represent QU. Glad I could gain more insight on this impressive project with a lot more to offer than just a place to stay active.

“I think at the end of the day, our students are so excited to finally see this come to fruition, because it’s been 10 years in the making,” Medina said. “So, the fact that they had this voice and the university administration listened and made this a reality has been something that I think when you talk to the students they’ll certainly be extremely appreciative of that.”

Quinnipiac has no issue putting some funding into club sports given how essential it can be in its students’ lives. Club sports provide athletes with an avenue where they can continue their athletic careers.

Medina expressed that not every student who comes here is capable of making a Division I team, but club sports provide a solution for that. Sometimes the varsity lifestyle doesn’t suit every student, and that’s when club sports come in handy.

“I had contacted [Quinnipiac’s women’s soccer head coach Dave Clarke] and he told me to come to a practice, but after thinking about it, the varsity team turns into your whole life, and that never was it for me,” Klimek said. “I played it to have fun, and obviously competitively to win, but I didn’t want it to be something that controlled my life like that. So this, club sports, is the perfect balance.”

Beyond the freedom, club sports provide the opportunity to find more than just competition in athletics. Athletes’ efforts go far beyond just on-field performance and advocacy. Each team has a president, vice president and treasurer, and each position is filled by student athletes. The teams are essentially run by their athletes, with little to no interference from Quinnipiac faculty.

“It was difficult this year, because obviously it was the first year that we were affiliated, so there was a lot of trials and errors,” Klimek said. “But, a lot over the summer was scheduling games, ordering uniforms and equipment, booking field, booking refs, organizing paperwork, organizing tryouts, organizing practices, so a lot of it happened over the summer.”

Team presidents take on the role of athlete and in a sense, athletic director. They’re responsible for much more than leadership and inspiration. The silver lining? They aren’t alone.

“Hope Schlegel is our vice president, and Sophia Marshall is our treasurer,” Klimek said. “So, we all really help each other a lot. Yeah, my title is president, and they’re vice president and treasurer, but we really all share the work pretty much equally. They help with whatever I need and we’ve just been working together so well for so long, it just works.”

Medina expanded on the roles of the athlete leaders, expressing that the teams conduct themselves this way not just because they want to, but because it instills values in students that they can carry with them past graduation.

“I think there’s a really good opportunity for leadership positions,” Medina said. “You have a president, a vice president, a treasurer, safety resource officers, team managers, things that allow them to take some of the things they’re learning in the classroom and apply it to their position on the team.

“This helps them build up their resume for when they’re applying for jobs, and they can make that connection of ‘Hey I know you want to hire me for this position, I’ve already done some of this with an organization that I’ve been involved in.’

“Obviously, we want to continue to build leaders amongst the university, and I think with the university of the future club sports definitely fits the mold of giving our students a great experience, and that leadership training that they’ll be able to use beyond Quinnipiac.”

The games themselves are a unique change of pace from the varsity sports. For one, the games take place off campus. Women’s soccer and men’s rugby play at North Haven’s high school and middle school. Medina credits this to the relationship between Quinnipiac and the school.

Steve Blumenthal, who graduated from Quinnipiac with a master’s degree in teaching, is the current Director of Athletics at North Haven. Quinnipiac’s relationship goes beyond Blumenthal, however, as the university donated $700,000 to North Haven schools that helped build new playgrounds.

In return, the fields have been provided for free for this first season, potentially longer. Quinnipiac has done an excellent job in creating relationships outside of itself to benefit student clubs and organizations like these.

In addition to just the new and refreshing location, club games have a different environment. They provide an escape from the constant competition and grind of school and work. Make no mistake, the games are competitive, but they remain friendly in ways rarely seen at varsity games.

Connecticut College players were walking to Quinnipiac’s bench throughout the game, asking for and receiving refills of their water bottles. Every time a player approached, they were greeted with a “hello” or a “how are you?” After the refill, they’d head back to their bench with the sound of a Quinnipiac player saying “good luck” or “feel better.”

It was a warm, friendly environment. There was competition, but it was to an extent that allowed friendship and kindness during the game and in the heat of the moment, not just afterwards.

With club sports in such an early, pivotal stage, the future remains uncertain. Medina hopes to add more clubs in the future, but at the moment, all parties are satisfied with the progress that’s been achieved. Club sports are finally legit at Quinnipiac.

“They had some agreements with the leagues they were in, and then other teams have struggled to get that league to recognize them because they don’t have University affiliation,” Medina said. “So one of the big things that they get is now the leagues take them more seriously because we have a backing. We’re signing off that they’re certified Quinnipiac students.”