Quinnipiac field hockey shut out by No. 4 UConn 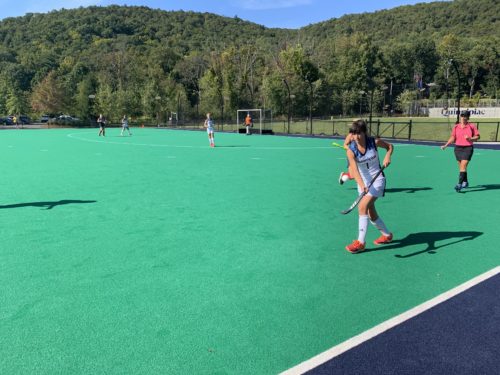 “We tried to play some stall hockey today, we spent a lot of the week stalling against one of the top teams in the country,” head coach Becca Main said. “The stall for us took a while to get it going. We wanted to concede nothing in the middle at the top of the circle, which we didn’t.” 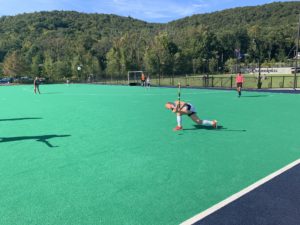 [/media-credit]Wasting no time, UConn announced its presence with authority by firing 12 shots on goal in the first quarter and controlling the majority of play while holding Quinnipiac shotless in the process.

UConn struck early as freshman midfielder Sophie Hamilton netted her first of two in the game off an excellent feed from sophomore forward Maddy Wray.

“When you play someone of this speed and this caliber, where 11 of the players on the team, eight or nine are national All-Americans, you don’t really know what is going to hit you,” Main said. “I think our first quarter we didn’t adjust, especially our younger players.”

The second period saw UConn jump out to a commanding lead. After a series of penalty corners, Wray notched her third point of the game as she scored a goal of her own.

On another clever penalty corner, senior forward Svea Boker potted her first of two in the game, which was confirmed after a several-minute review.

Not even five minutes later Boker scored her team-leading fifth goal of the season. 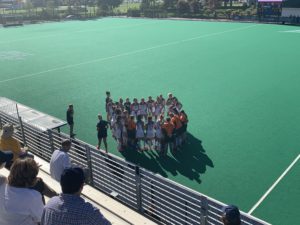 [/media-credit]Quinnipiac played a lot stronger in the second half of the game, obtaining more ball control and efficient team movement up and down the pitch.

Despite Quinnipiac’s improved play, UConn would put the nail in the coffin as Hamilton netted her second goal of the game to give her team an insurmountable 5-0 lead.

The fourth quarter was Quinnipiac’s strongest stretch of play during the game. The team was able to move the ball up the field and generate some offensive opportunities along with a handful of penalty corners.

“First of all, living in the moment, like our coaches always tell us to, and then just going away from the game, taking a deep breath,” freshman goalkeeper Hedda Biermann-Ratjen. “Know what you need to do in order to get your anger out, but also get your calm back.”

For the first time this season, Quinnipiac will go from playing a Big East school to a non-conference matchup. Quinnipiac will face Vermont back at the Quinnipiac Field Hockey Stadium this Sunday, Sept. 22, and hope to improve its 6-1 all-time record against the Catamounts.