More than just a food truck 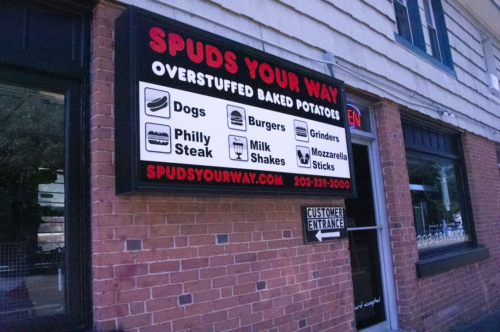 Imagine that you can order that giant, delicious baked potato that you loved to get from the food trucks on the Quad any day of the week, delivered to your dorm. That sounds like it could be in a dream, right? Well, it will soon be reality since the opening of Spuds Your Way’s new restaurant.

Located just a minute away from Quinnipiac’s Mount Carmel campus, where Droogies, QU students’ favorite place to call late at night for its infamous mac-n-cheese balls and milkshakes, Spuds Your Way opened up its new restaurant on Aug. 27 down on Whitney Avenue.

“Food trucking is awesome, but like it’s getting harder and harder to get the good events that are cheap to get into, vendor fees are going up more and more and more trucks are opening so it’s kind of cut throat,” Justin Cohen, owner of Spuds Your Way, said about why he decided to open up a restaurant. “With a storefront, you can have set hours for your employees whereas on the truck, hours vary so it’s hard to get good help.”

Droogies has been closed since the beginning of the semester, having Spuds Your Way easily be able to move in to its location.

“It [Droogies’ old location] just kind of fell into my lap,” Cohen said. “The people that were previously here were looking to get out and they wanted to unload all of the equipment too. Pretty much I could use everything they had outside of a couple pieces and then I just brought in a percentage of it. I mean it was just like a low investment to open up whereas if I went into a place and had to build everything up, it would cost me a lot more money.”

Cohen decided to create Spuds Your Way after realizing that getting a great baked potato in Connecticut is very difficult and that he wanted a positive change in his life.

“I was at a crossroads in my life. My ex-girlfriend just broke up with me,” Cohen said explaining the creation of Spuds Your Way. “We go to the Main House Baked Potato at the Big E every year to get the baked potatoes up there and to be honest, you can’t really find a good baked potato anywhere in Connecticut. It just kind of seemed like a good niche to get into.”

After realizing that the baked potato industry is what he was interested to get into, Cohen got support from his dad to creatively create Spuds Your Way.

“My dad is always thinking outside of the box,” Cohen said. “He was like ‘Jared you should do it.’ And I said ‘Why not?’ I was dealing poker up at Mohegan Sun and it was just kind of a like a dead end job. You’ll make a living out of it, but you’re not going to, you know, get rich or anything like that.”

Since then, Spuds Your Way has evolved from a food truck, to a trailer and then to this new restaurant.

“Yeah, this is our first restaurant,” Cohen said, explaining the history of Spuds Your Way. “We started with a food truck, then added a food trailer and seemed about the right time to put out a storefront.”

Even with the restaurant opening up just a few weeks ago, it has been pretty successful, despite the fact that not all of its services are activated yet.

“Yeah, so far so good,” Cohen said about his recently opened restaurant. “I mean we haven’t activated our delivery yet. We are partnering with Uber Eats, so as soon as that happens, which should be today or tomorrow [Sept. 18], I expect business to increase. Yeah, not everyone knows we are here yet. They are still finding out.”

QU students may wonder what will happen with the beloved Spuds Your Way food truck that rolls up on the Quad frequently throughout the school year. Cohen says that the truck will still appear on QU’s campus, but not as much as upperclassmen will remember it coming to QU in previous years.

“So I had to cut back on the amount of events we can do with the trucks just because I do not have enough staff,” Cohen said. “Like training people takes more than a day or two, so I’d rather not sacrifice the quality and the customer service just to do the business. So right now, we’re only out maybe three days a week on the truck or trailer and we’re in here [the restaurant] like six days a week.”

“I thought it was going to be a little bit more [popular],” Cohen said about QU’s impact on the restaurant. “Like I said, once, I think, we activate the deliveries I think that will be better. And eventually, we’ll take delivery over ourselves once we find out what the flow is going to be, but to add a staff member just to wait for a delivery, there’s just not enough of them right now. So yeah, eventually we’ll be open later Thursday, Friday and Saturday, I think will help as well. It’s just that I’m already working like 16 hour days. I can only do so much until I hire more people.”

Even with Spuds Your Way holding an official opening event in the next few weeks, the restaurant also has some benefits and features catered to QU students.

“We [Spuds Your Way] take Q cards,” Cohen said discussing everything QU related about Spuds Your Way. “We have online ordering available. We do a lot of events on the quad and stuff, so we are passing out menus when we are there. We are also doing a lot of catering gigs on campus so whenever we do that, we give out menus to all of the students. I think it will take a little time for the word to get around that we are more than just a food truck, but yeah, so far, three weeks, I can’t complain.”