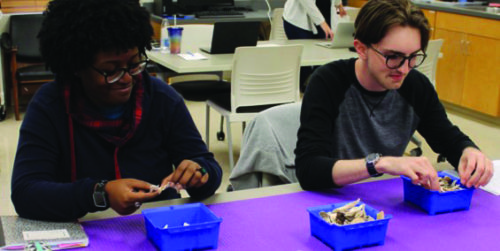 Quinnipiac University teamed up with the University of South Alabama to research the Early Bronze Age by using skeletons on loan from the United Arab Emirates.

Jaime Ullinger, a professor of anthropology at Quinnipiac University, designed the program with colleague Lesley A. Gregoricka of the University of South Alabama.

“We worked together on projects for a pretty long time and three years ago, we both traveled to the United Arab Emirates with Quinnipiac students,” Ullinger said. “We kind of talked about possibly this REU grant, which means ‘research experience for undergraduates.’” 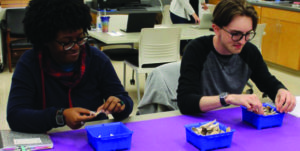 The National Science Foundation (NSF) awarded the professors $293,914 in a Research Experiments for Undergraduates (REU) grant.

“Effectively there’s a stipend that goes to the students, so they actually get paid,” Ullinger said. “It is the only time in a scientist’s life that they will get paid for doing research.”

Although Ullinger’s mission is to research the bones that she retrieved from the Arabian Peninsula, her other goal is to give undergraduates an opportunity to work as archaeologists. She applied for the grant so students can get the chance to do hands-on research as well as learn how to effectively share their knowledge.

“One thing we are thinking about is science outreach, how to make things accessible. We have a blog, Facebook, Twitter, Instagram,” Ullinger said. “They made five-minute videos that explain their research. We are adding Arabic subtitles so people in the UAE can see the videos and learn what we have discovered.”

Ullinger gave some insight into what the students have been researching so far.

“Your skeleton can, ultimately, [react] to society and culture. Things that you eat, the way that you were treated, and the way that you worked,” Ullinger said. “We know that at least 400 people were buried in say one of these tombs. But they’re kind of mixed up, and this is called commingled, people are coming in and moving things around, that’s part of the process. The idea is that even though you were an individual in life, after death you all become an ancestor group that’s important somehow.”

Archaeologists understand that during the Early Bronze Age, the society Ullinger is studying, did not adopt writing practices from the big civilizations around them, namely Mesopotamia and Egypt. The people that inhabited the Arabian Peninsula still had intricate cultural practices that archaeologists are uncovering today.

“Interestingly, we’re going to present at the conference in the spring that there is someone in the tomb, in one of the tombs, who was left articulated, meaning she didn’t get mixed up with everyone,” Ullinger said. “This summer we found out that there is a lesion on one of her ankle bones that is consistent with being some kind of tumor. That may have impacted her mobility, so maybe she couldn’t walk as well as other people. There’s another tomb, not so far from that tomb, that my colleague worked on. Another individual who had a form of polio, who would have also had limited mobility, she was also left articulated. We’re trying then, we’re interested in why these two individuals were left with their skeletons intact, and everyone else’s is mixed together.”

This research was conducted at the University of South Alabama with students all across the country, but Ullinger involves students that attend Quinnipiac University. Her ultimate goal is for undergraduates earning their anthropology degree to have real experience in the archaeological field before moving onto graduate school.

“I have a lot of students who do research with me at the center of anthropological research, and they have already been working on some things related to this project,” Ullinger said. “We have some of the skeletons here in order to do some X-rays and CT scans of them.”

As for the future research of this REU program, Ullinger said, the exploration isn’t over yet.

“Next summer we’re going to be doing aging, so groups will assess bones to see what the ages were of all the skeletons,” Ullinger said. “And we’ll be looking at activity patterns next summer, like where certain muscles pull on the bone and what that can mean about someone doing work that requires a lot of upper-arm strength.”

Though Ullinger gets to uncover the mysteries of a prehistoric society through technical research, it is more than that to her—it is about who these people were.