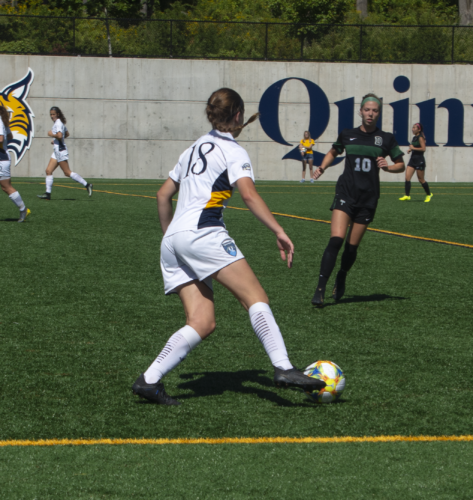 In a defensive battle, the Quinnipiac women’s soccer team lost its second straight game at the hands of the Dartmouth Big Green, this one by a score of 2-0 on Saturday afternoon at the Quinnipiac Soccer & Lacrosse Stadium.

“We played better today than Wednesday,” Clarke said. “Wednesday, we look tired and looked off pace and today we got on the ball more, so that’s closer to what we expected the game to turn out today.”

Clarke didn’t walk away from the game with his head hanging. He understood the struggles, especially those of senior goalkeeper Olivia Myszewski who was making her first start since last season. 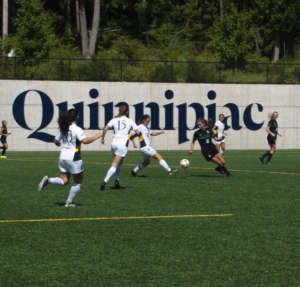 [/media-credit]“It’s obvious [Myszewski] trained in the spring, but it’s been a long road back and it definitely gets into her head, “ Clarke said. “Some of the things that she did today she was getting used to a little bit because even with practice, she has not been practicing 100 percent and we’ve been backing off a few things.”

Not only did the Bobcats struggle defensively, but they had trouble creating opportunities for themselves on offense. In the first half Quinnipiac totaled just three shots, only two of which managed to end on frame.

“We didn’t create,” Clarke said. “We push the ball a lot and try to force shots or crosses in, but I feel like we do not need to do that. Those little decisions of creating a good look versus forcing a shot in a game really make a difference in the way we play.”

The Bobcats entered the half with one shot on goal, one corner kick and one save.

One thing that Clarke was looking for in the second half was finding a perfect lineup.

“You take things in practice and see how it is going to transfer into the game and you can’t replicate the game, you really have to see it there,” Clarke said. “Moving parts is not just putting someone up top, it’s then who is beneath them. You’re trying to get service into that player. Once you find that lineup, you have to see how they will work together and that’s what I was trying to find out this week.”

For the first 10 minutes of the second half, both teams continued to play the same kind of defense played in the first half, until sophomore forward Izzy Glennon broke the tie, scoring her first goal of the season and putting the Big Green ahead 1-0.

WSOC: The Big Green pushes the lead 2-0 by freshman forward Allie Winstanley, scoring her first goal of the season due to a costly turnover by Quinnipiac freshman goalie Olivia Myszewski. 13:30 remains in the second half.

One of the best looks of the game came in the 70th minute. Glennon was one-on-one with Myszewski, but Myszewski managed to make a fantastic save, keeping her team’s hope of a comeback alive.

With 17 minutes remaining in the second half, Myszewski kicked the ball to the wrong team, leading to freshman forward Allie Winstanley scoring her first goal of the season and pushing the lead to 2-0.

Despite the two goals surrendered, Clarke was pleased with the defense that his young Bobcats played.

“Looking back at this game, I was very happy with the way the team played defense the whole game,” Clarke said. “We never gave up and we forced Dartmouth into a lot of situations, causing them to turn the ball over. I saw that we made a lot of strides on defense as a team and I couldn’t be more pleased. We just need to fix the little things and I think we’ll be in pretty good shape.”

The Bobcats enter MAAC play on Saturday, Sept. 21 against the Canisius Griffins at Demske Sports Complex at 1 p.m. That said, Clarke is still taking the season one game at a time.

“We haven’t talked about the expectations, we’ve sort of backed away and take every game as it comes. We got to wait for the next one as opposed to who it is, what it is, where it is. The whole thing for us now is that I wanted us to be 3-3-1 or 4-3 coming out of the non-conference games and we are 4-3. This is the game that, regardless of how we were, Dartmouth was going to be the one who would bring us down to Earth.”