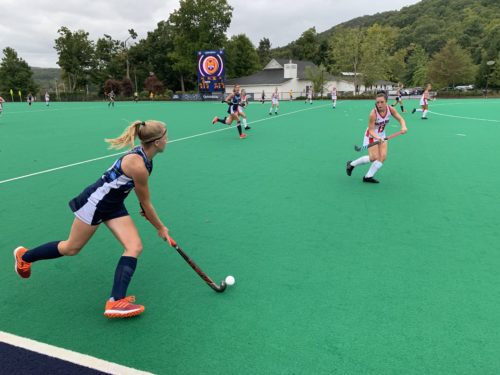 The Quinnipiac University women’s field hockey team made its regular season home debut on Saturday, Sept. 14, earning its first win of the season in a 2-0 victory over the Sacred Heart University Pioneers.

This was the team’s first game since returning home from a three-game road trip in California to start the season.

“We left California kind of knowing who we were,” head coach Becca Main said. “We spent the last two weeks figuring out how to best get that reigned in and into a good position.” 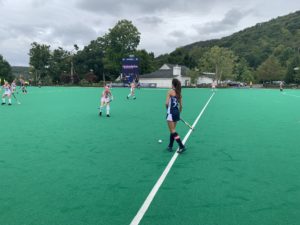 [/media-credit]Graduate student midfielder Bianka Strubbe put the Bobcats into action quickly with an excellent shot on goal just 29 seconds into the game. The team kept the pressure on as Strubbe scored off a penalty stroke with 20 seconds left in the first quarter.

The Bobcats increased the tempo in the second quarter and took 14 shots, including 10 shots on goal, but couldn’t capitalize due to Sacred Heart junior goalkeeper Hailey Power’s superb work in goal. Power finished the game with 11 saves.

The first half ended with the Bobcats up just 1-0, but the stat sheet showed a much larger difference between the teams. The Bobcats led the Pioneers 13-0 in shots on goal and 6-0 in penalty corners.

The Pioneers used the halftime break to regroup and came out running in the third quarter. In the first six minutes, they took four shots, including two on goal, and earned three penalty corners.

Bobcats freshman goalkeeper Hedda Biermann-Ratjen kept the team composed in her first career start by making two key saves in quick succession, getting the Bobcats back on track.

The Bobcats had seven penalty corners in the first three quarters but struggled to convert until early in the fourth quarter, when freshman forward Eva Veldhorst scored her first career goal on an assist from sophomore defender Jess Halley, her first of the season.

“I think we just had to like, stay calm,” Halley said, “we were trying to just hit it at the goal instead of taking our time and looking for the right areas.”

This was the most productive offensive game from the Bobcats this season as they finished with 31 shots, nine more than they had managed in their first three games combined. Their 16 shots on goal matched their season total coming into the game.

For the first time this season, Biermann-Ratjen played all 60 minutes of the game. She finished with six saves and earned a shutout victory.

The Bobcats travel to Hofstra University for a game on Monday, Sept. 16, before returning home for their Big East opener against UConn on Friday, Sept. 20.

“For us today,” Main said, “a win and a shutout is really paramount for us in the direction we need to go for the rest of the month.”