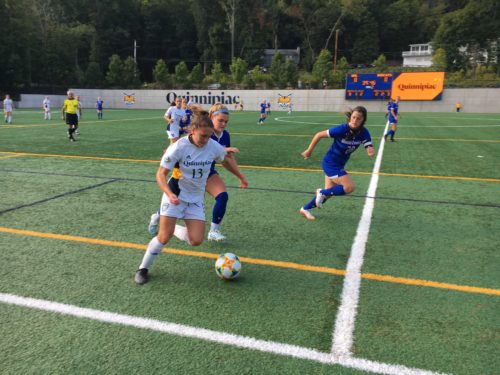 The Quinnipiac Bobcats suffered a tough loss on Wednesday, Sept. 11 at the hands of the UMass Lowell River Hawks by a score of 2-1. After the overtime nail-biter, the Bobcats fall to 4-2 and the River Hawks improve to 1-1-4.

The first half of the game was relatively quiet, with Quinnipiac getting off to a sluggish pace, leaving head coach Dave Clarke to watch his opponents carve holes in his defense. 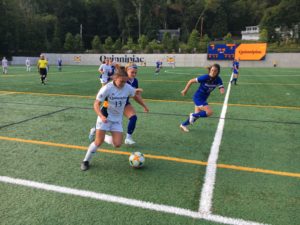 [/media-credit]However, the game script quickly changed in the second half. The Bobcats put a charge into their energy and started the second half firing on all cylinders.

“At halftime we’re sort of trying to get them to [tire themselves out] which is always difficult in the flow but we weathered the storm,” said Dave Clarke about the change of pace in the second half.

“I don’t think you can [eliminate fatigue],” Clarke said about his own players feeling tired. “You’ve got to manage it, especially with the freshmen.”

It did not take long for the Bobcats to finally get rid of the goose egg on the scoreboard, as sophomore forward Lauren Wendland calmly deposited a floater into the top left corner over the head of goalkeeper Farrell O’Shaughnessy.

Things then started to shift back into the favor of the River Hawks, as freshman goalkeeper Meaghan Phillips, who had

kept a clean sheet in her previous three home games, conceded a penalty in the 67th minute. She was going after a ball in the air, colliding with a UMass Lowell player in the process. Phillips also picked up a yellow card for the penalty. The sophomore River Hawk midfielder Emily Nelson slotted the ball neatly into the left-side netting, pulling her team even with the Bobcats.

With the game knotted up at one goal each, the two teams exchanged attack for attack, but the pieces did not fall into

place for either squad and the game moved into overtime. With the game on the line, senior defender Mackenzie Tibball blocked a shot inside the 18-yard box and was charged with a handball. 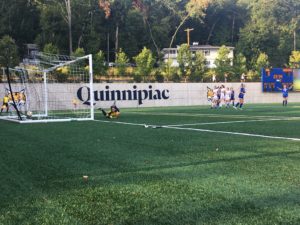 [/media-credit]The call was hotly contested by fans and players, arguing that the shot hit her face and not her arm, but River Hawk junior midfielder Courtney Coleman Phillips the wrong way and sent the River Hawks home with the narrow win.

The Bobcats struggled with their discipline in other areas of the pitch as well, piling up 18 fouls and four yellow cards in the game, compared to UMass Lowell’s nine fouls and one booking. This led to the crumbling of many offensive attacks that may have sealed the game for the Bobcats.

“There’s no point in getting down too much on the losses, especially non-conference,” Clarke said about moving forward from the loss. “You learn from it and take the emotion out of the game.”