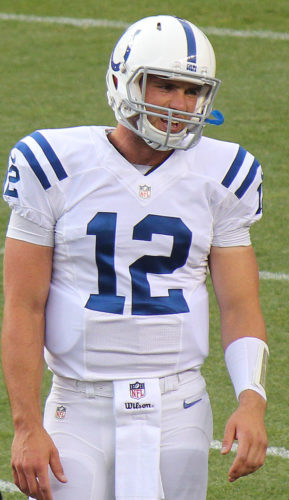 The unthinkable happened at Lucas Oil Stadium during the Indianapolis Colts’ preseason Week 3, 27-17 loss to the Chicago Bears.

Star NFL quarterback Andrew Luck set the sports world on fire by announcing his retirement at the age of 29.

The news broke during the game, and as Luck headed towards the locker room, he was showered with boos from the fans who used to worship the ground he walked upon. Season ticket holders wanted refunds. Gamblers stared blankly at their seemingly wasted Super Bowl pick. Fantasy owners spiked their phones into the ground.

A feeling of confusion and indignation filled the football community as Luck took the podium in the post game press conference. Luck cited injuries and rehabs as the cause for this shocking decision.

He definitely was not wrong. Luck battled a wide variety of injuries since he was drafted No. 1 overall in the 2012 NFL Draft. In the span of just six years, he tore cartilage in two of his ribs, partially tore his abdomen, lacerated his kidney, suffered at least one concussion, faced a torn labrum in his throwing shoulder and to this day is still battling a combination of a calf strain and an ankle issue. His availability for Week 1 was already in question, and Luck decided to get out of the game before irreversible harm was done.

I remember standing in line at Toad’s Place when my friend showed me a report stating that Andrew Luck — the four-time Pro Bowl quarterback who was so good the franchise famously “sucked for Luck” in 2011 — was hanging up his cleats and retiring. I then proceeded to spike my phone into the sidewalk as one of the fantasy owners who drafted Luck a week prior.

Fantasy football aside, I could not forgive him for doing this to his team only two weeks before the start of a new season. The 2019 Colts had promising 12-1 odds of bringing the Lombardi trophy to Indianapolis. Those odds have since plummeted to 80-1 via vegasinsider.com.

But now, several weeks removed from that announcement, I’m not sure I feel the same way.

It’s easy to forget the beating this guy took. While that list of injuries is damning enough, I have to bring everyone back to the revolving door that was the Colts offensive line in 2016, with extreme emphasis on “offensive.” Andrew Luck was sacked 41 times, which was tied for the fifth most in the league with Cincinnati Bengals’ quarterback Andy Dalton. As a result of this beating, Luck tore his labrum in his throwing shoulder. Colts owner Jim Irsay continued to promise fans that the injury was not a big deal.

News flash — it was.

It cost him a full year of football, the 2017 season, but Luck came back and acted as the player we all knew and loved. He led the Colts to a 10-6 record after a 1-5 start and a Wild Card berth in 2018. Luck threw for 4,593 yards and 39 touchdowns, finishing fifth and second respectively in each category league wide. He then bested the Colts’ divisional rivals, the Houston Texans, and went to the Divisional round of the playoffs where they were defeated by MVP Patrick Mahomes and the Andy Reid-coached Kansas City Chiefs. Luck won 2019 Comeback Player of the Year, and the Colts entered the 2019 season as one of favorites to win the Super Bowl, as previously mentioned. This is what Luck meant to this team.

Andrew Luck was a gift that we all should have taken more time to appreciate and less time taking for granted.

I don’t mean to overwhelm you with these stats. It’s just important to remember how great this man was.

He now joins an exclusive club of NFL stars who retired too early in the eyes of the fans. This club includes stars and Hall of Fame caliber players like Barry Sanders, Calvin “Megatron” Johnson and Jim Brown.

Even though the Colts may have lost Luck, they are not hopeless. Quarterback Jacoby Brissett is mostly unproven but should serve as a capable NFL starter. His one season as a full-time starter in 2017 featured one of the worst offensive lines that year. He was sacked a league – high 52 times, the most in a single season for the franchise since 1991, per profootballreference.com.

With the offensive line and the team much improved since 2017, Brissett has the chance to take the Colts where they want to be. He completed a promising 21 of 27 passing attempts for 190 yards and two touchdowns in a Week 1 overtime loss to the Los Angeles Chargers. His ability to maintain drives and avoid turnovers should help the Colts remain above water. While a Super Bowl may be out of reach barring an unexpected jump by Brissett, the Colts are still armed with the most cap room in the NFL and enough young talent to achieve great levels of success.

At the end of the day, Luck gave up millions of dollars to make “the hardest decision” of his life, as he stated in his retirement speech. Colts owner Jim Irsay estimated that Luck was “leaving 450 million dollars on the table,” and while Irsay is known for making outlandish quotes he probably is not too far off.

Jared Goff was just given $134 million through a four year extension with $110 million guaranteed per Adam Schefter at ESPN, and Luck would be hitting the market three years from now with the market constantly being reset with every new deal. Luck gave up all of this for his body and his health. Ultimately, we all may just be more angry that we may never see this talented quarterback play again.

His legacy as the man who pulled the Colts out of the gutter and pushed them towards Super Bowl contention should not be tainted by the timing of his retirement. Remember him as the man who changed a 2-14 team in 2011 to an 11-5 team in 2012. He fought tooth and nail year after year to carry a franchise that for too many years failed to protect him.

It may be “unLucky” for us as fans to see him go, but be grateful you were able to see him throw to begin with.