Run it back turbo 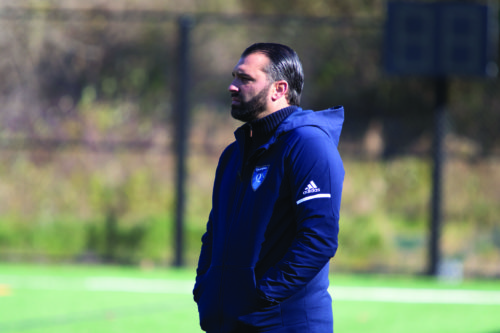 Quinnipiac head coach Eric Da Costa looks on as his team battles on the field.

Last year’s MAAC championship loss to Rider – a loss that came at the end of the most spectacular season for Quinnipiac’s men’s soccer team in recent memory – still haunts junior goalkeeper Jared Mazzola to this day.

“You can come over to my room,” Mazzola said. “I got the Rider poster printed out.”
That roster still sits on his wall, reminding him every single day how last season ended.
After finishing second in the MAAC, Quinnipiac earned home-field advantage through the first two rounds of the conference tournament. 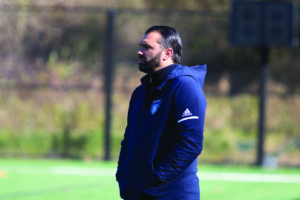 [/media-credit]With a little bit of luck, Quinnipiac faced lower-seeded Rider in the championship game, meaning the team would play at home again. The team had the opportunity to both claim the conference championship and gain eligibility for the NCAA tournament all in one game, all in front of its own fans.

But not all stories have happy endings. Quinnipiac lost to Rider by a score of 1-0 in the MAAC final, the lone goal not coming until 10 minutes into the second half. Despite the Bobcats’ best efforts, which included outshooting Rider by nine and putting six more shots on goal than their opponent, they couldn’t recover.

“That’s a tough question,” Mazzola said when asked about the locker room following the loss last season. “To like think back to that, because obviously after the game I was gutted, man. It was a tough goal to concede, especially coming so late, and…it was hard. So when we got back in there it was…you could hear a pin drop. It was really tough.”

Despite the magical season that had unfolded before their eyes over the past few months, players and coaches were unhappy. Quinnipiac went 8-1-1 against MAAC opponents, its best mark since 2014, but it wasn’t enough. Senior forward Eamon Whelan led the conference in points and goals, and former teammate Rashawn Dally finished fourth in points himself, but it still wasn’t enough.

At the end of it all, the Bobcats walked away from last season with a sour taste in their mouths and regret in their hearts, questioning what more they could have done. It was and still is understandable to be so upset with the final outcome of last season.

Tough loss for QU, but an incredible season overall. Check out my recap of the MAAC Championship game!! https://t.co/qG6V6auS1b

“I can’t speak for everyone else, but for me it bothers me to this day,” Mazzola said. “Especially with the talent we had last year, and the guys really accepted me when I got there. It was something that I wanted to give to them, especially the seniors, they were so nice. I really wanted to fucking, just grind it out for them, and it still bothers me to this day.”

Every single day, that poster reminds Mazzola of what happened last year. It motivates him each morning to push himself even harder, to invest even more into his team. Because this year, things will be different, and he’s not the only one who thinks so.

“It’s a new season, we spoke about it last year and we worked from January until May to put ourselves in a position to get back into contention this year,” Quinnipiac head coach Eric Da Costa said. “We’ve worked hard, in terms of recruitment, to bring players in that we can help put us back in that position again. I think we’ve done our job, the returners have done their job.” 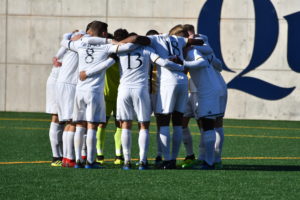 “We’re not going to approach it any different this year, because we think we have the talent,” Whelan said. “We have the mindset to do it. We just gotta believe in ourselves and keep grinding.”

Even with all the efforts to adjust, the team has struggled at times to find an identity early on this season. With so many newcomers – eight to be exact – it can be difficult to adjust. Some players might not get the same touches, some might not even be playing the same position. But individual success and comfortability aren’t a point of emphasis this year. It’s all about the team.

“This year, we have a very young team, so we’re really focusing on trying to get the shape correct, and the tactics more than the athleticism,” Mazzola said. “So, just plugging in different players, trying new things and just trying to excel and see what works and what doesn’t. You definitely see changes from this year to last year, just in how we play. Last year, we had the force of having Rashawn [Dally], so it was really good for us to be able to look for him as an outlet, where this year it’s not as convenient.” 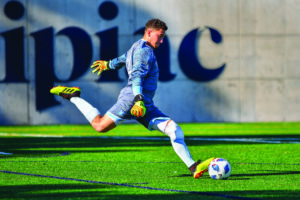 [/media-credit]Despite the lack of convenience, the team isn’t concerned about where it’s at. It’s early in the season, and there’s still plenty of time for coaches and players to figure out what kind of team they’ll be this season.

One thing is for sure, and that’s that everybody believes they’ll figure it out. Coaches and players alike have found motivation both together and on their own, and with such a deep, burning desire to succeed, it’s difficult to imagine that this team won’t.

“When you’re a goal short and a point short, I hope most of the players in our program are self-motivated and they can see that and understand what we’re working towards,” Da Costa said. “And our message is constant every day, we don’t really reflect too much on the past, we’re looking at this new group, they need to write their own chapter in our history, and we have a pretty solid history, and this is their opportunity to see how far they can go.”

Mazzola added a more intimate view into the team and its locker room environment this season, explaining the perspective of some players, including himself, and what pushes them to succeed
this season.

“I think, when I look at a bunch of these players, I see where they come from and they’re just done taking shit,” Mazzola said. “Like, everyone just wants to win for each other. When I see someone go down, or I see someone not playing good, it’s my job to get them back in the game. And, a lot of teams have that, but I really feel like that could be one of our strongest points.”

The team is certainly beginning to find its identity off the field, which will help accelerate progress on the field. Still, there’s more than just identity that goes into a championship team. Players need not understand just the schemes, the coaches and each other. They need to understand themselves, and two leaders on the team seem to have done just that.

“I’m a firm believer in everything happens for a reason,” Mazzola said. “And, if you go back to Jared Mazzola as a sophomore, coming into Quinnipiac, I wasn’t ready. I wasn’t ready to win a MAAC title. It would’ve just showed me that everything I did leading up to it – the diet, the training, everything – I felt that I didn’t do everything I could. So, that taught me what I needed in order to succeed. In order to create a winning mentality. That’s training fucking twice a day, getting after it, fucking bleeding for everyone on this fucking team.” 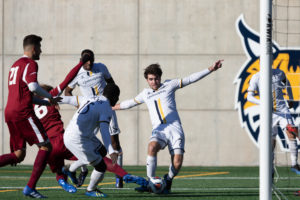 [/media-credit]Whelan has also started to embrace his leadership role on the team. When somebody has the physical and intellectual gifts that he does, teammates are drawn to that person. They immediately become somebody for others to look up to, and Whelan is starting to find that role more comfortable this season.

“It was tough,” Whelan said of the result in the MAAC final. “A lot of heavy faces, but I mean, we win as a team, we lose as a team. The older guys, I would like to say myself included, we gotta pick the younger guys up. It was tough, the offseason was tough, but it was always in the back of our minds entering spring, entering summer. But that’s why we’re here, grinding throughout the entire offseason to be in a similar spot this year, and hopefully get a better bounce this time.”

As everything continues to fall into place, this team looks more and more like a contender each week. It has all but one critical aspect of a championship team, and that one ingredient missing is support from its fans.

Mazzola wants this season to be a big part of all Bobcats’ lives, not just his and his teammates’. It’s important that all Bobcats work together to bring the championship home, and that includes the fans.

“I want to tell everyone to come out and support,” Mazzola said. “I know [the rainy, cold game against Sacred Heart] was a tough one for the fans, but I really feel like we can change a lot of people’s minds. That would be awesome.”