The animals came out to play 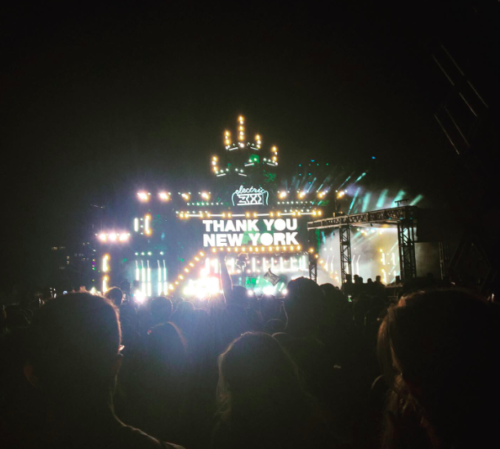 Each Labor Day weekend, thousands of electronic dance music fans flock to Randall’s Island to see some of the hottest DJ’s perform at New York’s premier electronic music festival, Electric Zoo. This year’s lineup was one to remember.

The planning committee for Electric Zoo pulled off all the stunts to get some of the biggest names in EDM to perform. There was a broad variety of headliners with older artists such as Eric Prydz, Benny Bennassi and Armin Van Burren, to newer artists Zedd, Afrojack and Diplo. As if those artists weren’t enough, 15-time NBA All-Star Shaquille O’Neal, stage name Diesel, was performing.

The festival consisted of four different stages — Main stage, Riverside, Hilltop and All My Friends. Main stage, as the name states, was where the bigger names performed their sets while the other stages hosted some of the smaller DJs. Each stage was equipped with exciting pyrotechnics and smoke cannons. Main stage not only had both of these, but dazzling fireworks as well.

While the stages were breathtaking with their lights and looks, there was one minor problem that was crystal clear-the sound bleed. Sound bleed is when music from one stage can be heard from another stage, hence the sound bleeds from one stage to the next. This problem did not apply to the Main Stage but for the smaller artists, it was a little bump in the road.

There could have been a solution to Electric Zoo’s sound bleed problem. The Governor’s Ball, which is also held at Randall’s Island earlier in the summer, has four stages as well. However, they do not experience the sound bleeding problem. Next to the venue is a golf range that is currently not in use. Governors Ball uses the golf range for two stages and the main space for the other two. Where Electric Zoo had four stages in one space, Governors Ball had two which makes it more spacious and easy to hear the music at one stage without the sound bleed.

Regardless of the sound problem, each artist put on spectacular performances. With a festival as huge as Electric Zoo, the Friday artists needed to bring the heat. Boy did they bring the fire. Malaa tore the All My Friends roof down with his future house beats. Excision had the entire crowd headbanging at the Hilltop Arena. Plus, with headliners Oliver Heldens, Kaskade, Diplo and Eric Prydz at Main Stage, there was no doubt that Electric Zoo was off to an amazing start.

Saturday’s artists were ‘above and beyond’ expectations. Flux Pavillion resurrected dubstep during the final set at Riverside. Eric Prydz not only closed out Friday at Main Stage, but he also closed out his own stage, Pryda Arena. Prydz was one of four DJs (Getter, Seven Lions and NGHTMRE B2B SLANDER) to take over a stage for a day.

The Main Stage DJs on Saturday alone could have been the only artists playing and still would be worth the price of admission. The legendary mind behind the 2003 hit, “Satisfaction,” Benny Benassi appeared at 4 p.m. He was followed by the progressive house duo, Tritonal.

Now, how do you get thousands of people hyped for the three closing acts? You bring out Shaquile O’Neal of course. The 15-time NBA all-star who goes by DJ Diesel came on for the 6 p.m. set. Diesel played this set with fellow DJ, Borgore. Their set consisted of trap and dubstep music which mirrors music similar to Skrillex when he first broke out onto the EDM scene. This had the crowd creating mosh pits, headbanging and most of all hyped for what was yet to come.

Originally, Afrojack was supposed to come out and play the 7 to 8:25 p.m. set. Sadly, he had to perform at a later time due to the death of a close friend.

Zedd was kind enough to be able to switch sets. These two DJs back to back was insanity overload. Zedd opened up his set with strings of beats that led into his hit song, “Spectrum.”  He kept the flow of the set going by playing “The Middle” and “I Want You To Know,” while also throwing in some remixes of songs like AC/DC’s “Thunderstruck” and the Black Eyed Peas “The Time.” The crowd was blown away with not only the music but the incredible visuals from the stage.

Afrojack kept the same, if not, a higher intensity set after Zedd. Coming out to one of the most blood-pumping introductions, Afrojack followed it up with “Bass is Kicking” and “Turn Up the Speakers.” He even teased the festival-goers with IDs to songs. IDs are songs that haven’t been released yet and don’t have names.

One of the most memorable moments from Saturday night was when Afrojack paid homage to the late Avicii, playing remixes of “Hey Brother” and “Wake Me Up.” Avicii passed away earlier in April of 2018.

Sunday brought in the unofficial, ‘King of Trance,” Armin Van Buuren. Armed with outstanding pyrotechnics and fireworks, Van Buuren had the crowd jumping the entire set.

Overall, Electric Zoo was full of good vibes throughout the entire weekend. With a lineup as diverse as it was, avid festival goers and non-avid festival-goers were treated to the best Electric Zoo has to offer.