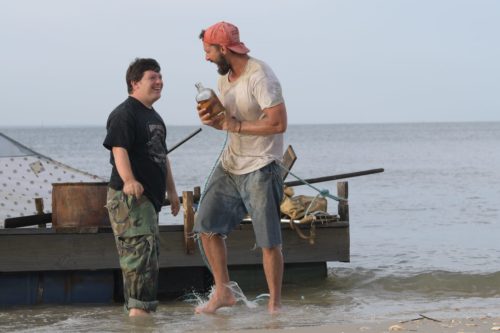 The film follows Zak, a young-adult with down-syndrome escaping the retirement home he was housed in Florida, in order to become a professional wrestler. Along the way, Zak meets a vagrant fisherman named Tyler, played by Shia LaBeouf, and he soon joins him on his journey.

Besides LaBeouf, “The Peanut Butter Falcon” boasts an impressive cast including Dakota Johnson, Bruce Dern, Thomas Haden-Church, John Hawkes and Jon Bernthal. The protagonist Zak is played by breakout star, Zack Gottsagen, and he shines as a gleeful individual unafraid of the world stopping him from following his dream. Throughout the film, Zak and Tyler are being tracked by Johnson’s character, Eleanor, a young caretaker at the retirement home, who deeply cares for Zak’s safety.

“The Peanut Butter Falcon” is set mostly in the outer banks in North Carolina, and takes queues from southern adventure stories. The most notable example being Mark Twain’s American classic “The Adventures of Huckleberry Finn,” as it follows two outlaws escaping to freedom in the vast southern wilderness. All this is accompanied by a pleasant, twangy guitar score that feels akin to something like “O Brother, Where Art Thou?”

Directors Tyler Nilson and Michael Schwartz prove themselves quite capable as first-time feature-length directors as the film is well shot with several unique and captivating sequences set to the backdrop of the open wilderness and the bayou.

The greatest strength in “The Peanut Butter Falcon” is its excellent writing. Writing a script whose main character has down-syndrome without looking at him with pity or drowning the story in sympathy is no easy task, and Nilson and Schwartz excel at this. The role of Zak was written for Gottsagen, with both filmmakers meeting him beforehand and he envisioning a starring role for him.

Along the journey, Zak and Tyler encounter plenty of interesting characters and events that keep the narrative afloat. Although the two are complete strangers at first, Zak and Tyler learn to work together and their friendship soon blooms, becoming the center focus.

However, this focus on friendship becomes the film’s biggest flaw. While Tyler opening up to Zak is heartwarming and well earned, the film consistently cuts to sequences of friendship that feel like they’re taking time from other important subplots within the film, as it slows down and cuts the edge of tension that was built earlier on. As much as I enjoyed the multiple friendship montages between Zak and Tyler, I could have done with more sightseeing or concern about their voyage.

At an hour and 37 minutes, “The Peanut Butter Falcon” never feels rushed or dragged out. While watching, I was both enjoying the journey and hoping it would stay exciting, and luckily it did. The film’s third act manages to deliver new scenarios for the characters to deal with and everything they’ve learned comes to play.

“The Peanut Butter Falcon” deals with some heavy ideals and themes, such as disabilities and prejudice but the film does not let these aspects overtake the light hearted adventure that unfolds. While nothing in this film is overly complex or thought-provoking, it’s truly inspirational story makes up for it.

I think casting a lead with down syndrome and just going head first into the narrative, without dwindling on the lead for that reason, is the definitive way to go about it. By doing this, the audience does not feel alienated from the main character despite their differences, as the story just rolls with it.

In today’s current push for Hollywood representation, “The Peanut Butter Falcon” feels like a much needed breath of fresh air for representing its main character in a normal fashion.

The film has received a 95% on Rotten Tomatoes while also garnering acclaim by the general public, and it very well could be on it’s way to a successful awards season, which is rare for first-time directors like Nilson and Schwartz.

Although it’s no masterpiece, “The Peanut Butter Falcon” feels both fresh and familiar, making strides for accurate representation and all the while having a good time.