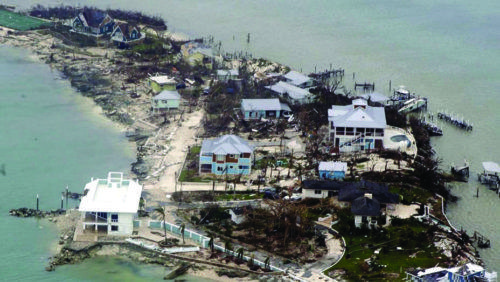 Some Quinnipiac students have only heard of the historic hurricane battering the south, but other college students are living through Hurricane Dorian and its aftermath — one of them being Quinnipiac’s very own.

“The most devastating thing to hear was that the hospital was flooded with over five feet of water,” Maddie Kennedy, a freshman film, television and media studies major, said. “That was insane to hear because they had to evacuate. People that are sick had to leave with all that water. I just couldn’t even imagine that situation.”

Kennedy’s father lives in the Bahamas and Kennedy herself grew up there. She has spent the week attending classes and awaiting news from home.

Hurricane Dorian first caught the attention of meteorologists on Aug. 19. The National Hurricane Center (NHC) identified a tropical wave in western Africa. On Aug. 24, the NHC classified it as a tropical depression. Overnight, it developed an eye that was 12 miles wide, earning the classification of tropical storm. Over the next several days the storm continued intensifying, crawling across the Atlantic. It reached Category 5 status as it collided with the northwest region of the Bahamas.

Hurricane Dorian is the most powerful hurricane to hit the Bahamas. Forty-three people were killed due to the storm. The airports were destroyed, and there was property damage estimated to be $7 billion, according to the New York Post.

Kennedy’s father was on the island when the storm hit and experienced all of its dramatic impact.

“My dad had to go out because a shutter flew off, and he was worried the window would break so he had to run outside and try to fix it during the storm,” Kennedy said.

She also shared how other people were affected on the island

“I do know people who had houses that were completely engulfed in water, with storm surges of over 20 feet, and I know people had to go on their roofs to wait to be rescued,” Kennedy said.

The historic hurricane did not affect Florida as much anticipated, but there were still preparations across the state.

Aspen Dagostino is a freshman at Southeastern University in Lakeland, Florida. She said her university made a hurricane action plan.

“Last week, on Wednesday or Thursday, we got an email saying that classes would be cancelled from Friday at 6:00 to the next Friday. They emailed us way in advance so we would have time to leave and evacuate,” Dagostino said.

If they did not evacuate, Dagostino said they would be relocated to sheltered areas on campus.

“We would all end up in the cafeteria, and we would have to be spending a few days there,” Dagostino said. “Dorms aren’t safe for us so they would have had us all crammed into one room. And we wouldn’t have been able to leave unless we had to shower or use the bathroom, but that’s about it.”

Emily Burrus, a freshman at Embry Riddle Aeronautical University in Daytona Beach, Florida, had a different experience. They were required to evacuate, and if they chose not to, they were bused away from the area.

“We were required to evacuate, and if you didn’t have a place to go like with a relative or a way to get back to wherever you were from, they gave you buses and transportation to local shelters in the area,” Burrus said. “ I know a lot of the international students who couldn’t make it back home, had to go to the shelters.”

Burrus said she personally didn’t go to the shuttles, but those who did were provided with basic survival resources.

“From my understanding, food was provided, but no clothes or anything like that,” Burrus said. “I wasn’t there so I didn’t see for myself, but from what I heard, you were provided with food, flashlights if the power went out and the basics like that.”

Though all the experiences of the girls were different, one thing that they had in common was the emotional effect of Hurricane Dorian. Dagostino and Burrus both said that since the storm occurred so early in the year, it interrupted the adjustment period college requires.

“It was my first week of college, and all of a sudden we had to leave,” Dagostino said.“I was like ‘we just got here, and now I have to figure out how to leave.’ It wasn’t easy. I wasn’t sure if I was going to fly home or what to do. My classes had just started – I had only had three days of classes before we had to leave, so I really haven’t had time to adjust.”

Kennedy was affected more by the impact the storm had on her loved ones.

“It was very difficult knowing – well really not knowing – what was going on,” Kennedy said. “While it was occuring all you can really do is watch news channels. One thing that was hard, I wasn’t able to get in contact with my father during the storm, and even days later, still not hearing updates from friends who hadn’t been able to get service.”

While Kennedy was eventually able to contact everyone she needed, the waiting period also made for a tense first few weeks of college.

“There’s still a lot of people missing, fortunately no one I know, but there are lots of reports of missing people,” Kennedy said.

Hurricane experts at NASA are attributing the hurricane’s severity to climate change. Most hurricanes weaken when it reaches the north Atlantic, but in this case the water was warm enough to strengthen the storm. This is the reason Hurricane Dorian was so unusually powerful.

“I think this storm affected me because I wasn’t there to help out, and see how my family is doing directly,” Kennedy said. “This storm is also the most powerful storm to hit Grand Bahama, and it was definitely the most devastating.”