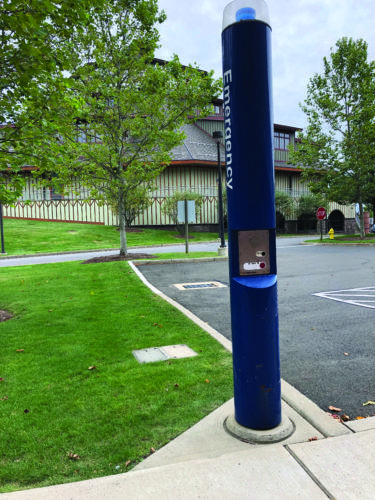 There are 28 blue lights on the York Hill campus.

When you toured Quinnipiac, you may remember a tour guide telling you about the “Blue Light System.” If you were to find yourself in a dangerous situation, there would always be a blue light within your sight.

“I don’t know where they are on campus and I cannot always see them,” Vera Helein, freshman media studies major said.

If you stand in the middle of the Quad, you won’t see a blue light.

If you stand in the Hogan Lot, you won’t see a blue light.

If you stand in the parking lot of the Theater Arts Building on Sherman Avenue, you won’t see a blue light.

“I definitely think there should be more on campus,” Megan Fonseca, sophomore communications undeclared major said. “I know that there is one going up to CAS but other than that I feel like there’s definitely not enough of them.”

“Those blue lights that you see now have been here for years,” Sgt. Jim Moniello, a long-time Public Safety officer said. “Where would you put one into the Quad? You can’t put these things every couple of feet. If everyone has that phone it’s so much easier, so much safer than trying to get to it.”

Moniello and Training Officer Brad Bopp said that students won’t need the blue light system anymore because of the “Rave Guardian App” they advertise to the students at orientation.

“Maybe that blue light could be a quarter of a mile away or so–running to that light may be difficult,” Bopp said. “With that phone in your hand, you can get that information to us right away.”

When the app is activated, Public Safety will be notified on a designated laptop in the Public Safety office. Officers will be able to see your location and will be dispatched to the area.

Bopp said the app currently only has 279 active users from Quinnipiac. This means the rest of the student body is relying on the blue light system or 911.

“It’s like a global blue light,” Bopp said. “We have this out there, we just need people to want to be part of it.”

The Chronicle conducted an informal survey in the class Facebook groups which received 126 responses. When asked “Do you know what the Rave Guardian app is?” just 26.2% of respondents said “yes.” Only 5.6% of respondents reported using the app.

Keith Woodward, associate vice president of facilities operations, said that going forward, the university will not be adding new blue lights to the Theater Arts Building or Hogan Lot because they are not used anymore.

“With the advances in communications technology, the majority of our community members, including students, visitors and employees have mobile phones, with access to emergency apps (in our case Rave Guardian), and the emergency blue light phones aren’t used as frequently as they once were,” Woodward said in a statement. “Are they accessible around the three campuses? Yes, but based on the Public Safety data in terms of their usage the blue lights haven’t been used in over a year. Our community is more likely to reach emergency services quicker by using their phone and dialing 911 or using Rave Guardian.”

Of survey respondents, 2% agreed that Rave Guardian is a suitable replacement for blue lights and 53.2% said that “maybe” it was a good replacement.

Bopp pointed out that the app is free and easy to install, unlike blue lights.

“There’s a lot of components logistically to putting one up,” Bopp said. “It’s not just Public Safety involved– it’s facilities, it’s telecommunications. Is it feasible? It’s something you have to figure out how to get power to it. Dig a trench 100 yards to get to it, but with this technology, newer technology, they’re thinking this is the way to go with Rave Guardian.”

Moniello said they encourage orientation leaders to spread the word about Rave Guardian because oftentimes students are more likely to participate in something when someone their own age tells them about it.

“When you’re sitting out there on the grass throwing around a beach ball have everyone take out their phones and sign up for Rave Guardian,” Moniello said.