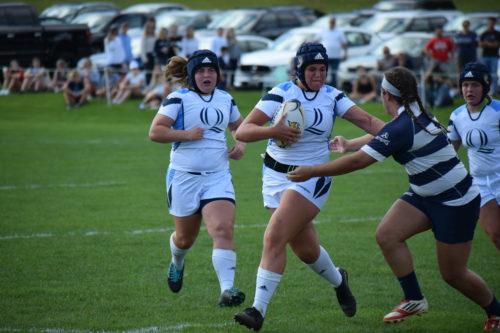 The Quinnipiac Bobcats (1-1, 0-1 NIRA) clawed their way to victory over the Penn State Nittany Lions (0-1) Saturday, Sept. 7, by overcoming two deficits throughout the game, winning 23-22 on their home field.

The Bobcats were able to control the scrums and set pieces throughout the game, something they struggled with last weekend against Harvard when they lost 57-10. 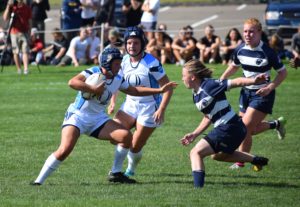 [/media-credit]“Making those adjustments we had from last week, if you look at the number of scrums that we did last week there were 32 of them and 70 percent of them we lost,” Quinnipiac head coach Becky Carlson said. “We won every single one of them we went into today and that made a huge difference.”

“After they had that one score right at the start of the second half,” Carlson said. “I had to take a look at my team and see what their body language was like and it looked like they were ready to go again so I had that confidence that we could take this.”

Using her elusive speed, Lemal-Brown responded with a try of her own to put the team within one point of the Nittany Lions’ lead. Ceolin made the conversion to put the Bobcats back out in front 23-22. The score would stay this way for the last 17 minutes which left Carlson on the edge of her seat.

“I felt like I was having kind of a heart attack on the other side because it kept changing possession,” Carlson said. “Every time we thought we had the ball we could slow it down and we had control, fatigue got to us and you could tell we were giving the ball up on the ground.”

The Bobcats visit West Point to take on the Army Black Knights on Saturday, Sept. 14, when the Bobcats will look to improve to 2-1.

“We are going to keep building on what we just did,” Carlson said. “I think now that they have really built that belief back up in themselves in the scrum and the forwards are feeling pretty strong, but I think up the middle I think our pace getting up the line and pressuring the offense is going to mean a huge difference.”