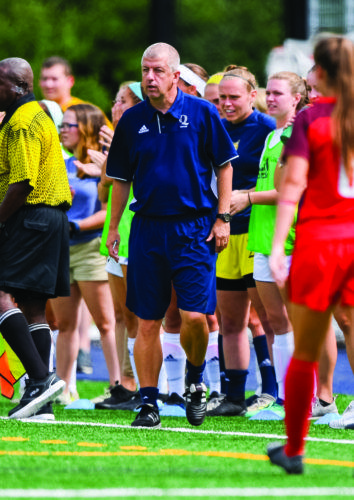 Dave Clarke is more than satisfied with the life he’s lived to this point. He’s accomplished things many can only dream of and helped people in ways that cannot be repaid. One of the most fulfilling aspects of his life, though, has been soccer.

Clarke has played soccer his whole life, lacing up the boots ever since he could walk. Because he had several family members that played professionally, including his dad, his goal from an early age was to reach the same level as they did.

“It’s no different than basketball, baseball or football. You dream about playing professionally from a young age and take every opportunity that comes your way,” Clarke said. “If it wasn’t to play then to coach or stay involved in the game, that’s how it panned out.” 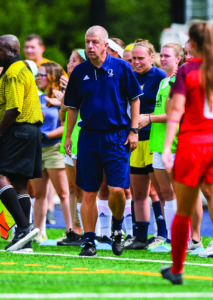 [/media-credit]After six seasons playing professionally for the Connecticut Wolves, Clark began his coaching career at the University of New Haven where he coached for two seasons, posting an overall record of 18-14-3. New Haven’s performance in the 1998 season (12-5-1), earned Clarke the New England Collegiate Conference (NECC) Women’s Soccer Coach of the Year.

After majoring in physical education, Clarke sought out a new school where he could both coach and teach.

“I interviewed for Quinnipiac in [1999], got the job just before I got married. As I always tell, Kim Witteman’s probably the best player we’ve ever had at Quinnipiac in the history of the program,” Clarke said. “Kim actually turned the job down and I was No. 2. Every time I see her I always thank Kim.”

His inaugural season with Quinnipiac created a new atmosphere for the soccer team. Clarke and his squad of Bobcats put up a terrific record of 16-5 including an NEC championship appearance.

In his sophomore season as Quinnipiac’s coach, Clarke pushed the team for more success. The team responded to Clarke’s challenge by posting a record of 13-7-1 and winning the conference title. They didn’t stop there, qualifying for the NCAA tournament by way of a play-in game, in which they defeated Loyola University Maryland in overtime 2-1.

“That moment defines the program right now and that’s what we’re trying to live up to,” Clarke said. “I would never change anything, from winning the league to the following year and winning the league that year too, to the play-in game and playing in the NCAA and all that experience that comes with it with the emotions involved, it’s a privilege.”

Ultimately, they lost in the following round to Harvard, but it was Quinnipiac’s most successful season for any of the school’s sports, and it was the first NCAA tournament appearance for any Quinnipiac athletic program.

The next handful of seasons were up and down for Clarke and the Bobcats. They saw a few solid seasons, playoff berths and one more conference championship. After the 2012 season, Quinnipiac switched over to the Metro Atlantic Athletic Conference.

Quinnipiac obtained an extremely high winning percentage against MAAC teams while playing in the NEC, and after transferring over the Bobcats did not win at the same ecstatic rate but still continued to put up wins against conference opponents in their first season in the MAAC. The team finished with a 3-3-4 record in the MAAC and clinched the No. 7 seed in the playoffs. 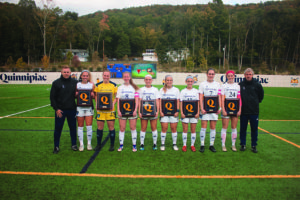 [/media-credit]“We actually had a fantastic record when we were in the NEC against MAAC teams, I think we were 26-1, it was something ridiculous like that,” Clarke said. “The first two years weren’t that bad because we didn’t lose to a top-five team during that time.”

The following season presented more difficulty than previous ones as Quinnipiac struggled to put up wins. However, Clarke scouted players tremendously for the 2015 season.

In order to load up for the 2015 season, Clarke refrained from scouting too heavily for the 2014 season, and his patience and wisdom paid off. After only winning three games in 2014, Quinnipiac improved to eight wins, while fielding the largest freshman class (13) in club history.

Clarke established himself as a terrific collegiate-level coach during his first decade at Quinnipiac, which led to his involvement in more international league play. During September of 2008, Clarke was asked by Noel King to assist the Irish National Women’s soccer team during the Achieve Your Gold tournament that the U.S. Women’s National team hosted. Clarke helped the FIF U17 U.S. National team to a CONCACAF title in 2018.

In 2013, Irish Sports Top 50 named Clarke as one of the best, next to names like Tom Brady, Jim Calhoun, Terry Collins, and Tom Coughlan. Following that recognition, Clarke was inducted into the Irish American Hall of Fame two years later.

“In hindsight, when I look at the magazine cover and the photographs and who’s next to me, I’m next to Tom Brady purely because of alphabetical order,” Clarke said. “Those types of awards, it’s about longevity. Just to be in that category is humbling.”

Not only has Clarke been a Hall of Fame coach and a mentor to the players he’s coached, but he has also been a tremendous help to the community. Clarke created the “#26 Uniform Auction” as a scholarship fund for Newtown in memory of the 26 people that were shot and killed in the Sandy Hook shooting. 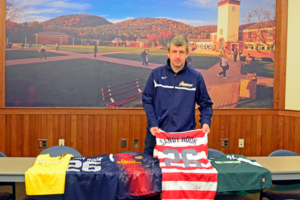 [/media-credit]Sandy Hook was an emotional experience for Clarke, as several of his players had many connections with the school. After returning from a Tottenham game with his daughter, she asked why they didn’t wear No. 26. It was because Ledley King recently retired so the number was unused, and that’s where Clarke got the idea.

“We got all these jerseys (No. 26) from teams like Barcelona, Real Madrid, [Manchester] United, Tottenham that were signed and framed,” Clarke said. “I’ve always wanted charity work to be more meaningful on an individual basis. You’re not doing it for public relations, you do it because it means something.”

Clarke also organized an annual 4×4 tournament to help raise funds for a local teenager and family friend of his, Reagan Carey, who was battling a rare bone cancer known as Ewing’s Sarcoma.

“When someone’s in the hospital for months at a time, the last thing the family wants to do when they get home is making dinner or breakfast, so the more donations for things like Dunkin Donuts, Brewer’s Bagels, stuff like that where they can grab and go. Every $5 donation becomes an important thing.”

Clarke has also decided that after each season the team will donate all the socks they have to the homeless as well as gift cards to places like McDonald’s or Dunkin Donuts where they can get a meal and a hot cup of coffee in the winter.

Throughout his tenure, Clarke expanded his range in players and people he’s affected. Clarke became a staff coach for the US Soccer Youth National Team as well being a coordinator and scout for the US U14 National Team for Connecticut and New York.

Clarke has had a deeply rooted impact on the game of soccer, especially for women, and his success only continues to grow. As a coach, he boasts a 170-168-37 overall record and mark of 151-153-35 while at Quinnipiac. He’s had some highlights to his coaching career, but his favorite happened at the beginning of his coaching days.

“My most memorable memory at Quinnipiac was when Alison Jaquith scoring the goal in sudden death against Loyola in the play-in game,” Clarke said. “Not only her goal but the players’ celebrations, that will always stay with me.”

Now in his 20th season with Quinnipiac, Clarke’s goal remains the same as it was during his first season as head coach, and that is to win the conference title and get to the NCAA tournament.
“Coaching for Quinnipiac has been a privilege,” Clarke said. “Whether it’d be wearing the crest of a college or the crest of a national team and you hear the anthems, it’s special.”