Who are Trump’s challengers? 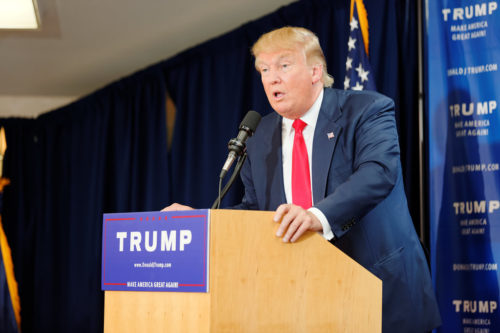 Most of the media coverage of the 2020 presidential election has been focused on the perplexing candidacies of some of the many Democrats. Representative Eric Swalwell, Rep. Seth Moulton, former Rep. Joe Sestak, Miramar Mayor Wayne Messam, Former Colorado Governor John Hickenlooper and Colorado Senator Michael Bennet among others can count themselves among this group.

It begs several questions: who are these people, why are they running for president, and how can we make them go away so we can focus on people with a realistic chance of winning?

Yet focusing on these quixotic Democratic candidates misses part of the story; there are also several Republicans entertaining doomed, unnecessary runs for the presidency.

To state the obvious, none of these candidates will succeed, barring an unprecedented sea change in the political winds. A sitting president has not been denied his party’s nomination since Chester Aurthor in 1884. Furthermore, Trump is incredibly popular with Republican voters. The latest Gallup poll put him at 88% approval with his own party. Therefore, in order for a primary challenger to pose a credible threat to the president, they would need to win over a very substantial proportion of Republicans who say they approve of the job Trump is doing right now.

The first of these people to announce was former Massachusetts governor William Weld. You likely haven’t heard of Weld, because he hasn’t won an election since 1994. If you have, it may be because he ran as the Libertarian Party’s nominee for Vice President during the 2016 election. During that election he all but endorsed Democratic nominee Hillary Clinton over his own ticket. He also endorsed then Senator Barack Obama for president in 2008 over Republican nominee John McCain.

During his tenure as governor, he took liberal stances on abortion rights and other cultural issues. During his candidacy so far, Weld has called President Trump a “raging racist” and that he would “prefer an Aryan nation.” These are not the kind of things that are conducive to doing well in a Republican primary.

This is not to say that there are not some, perhaps many, Americans who would agree with some or all of these positions. It is to say almost none of those Americans are intending to vote in a Republican primary in the near future. And it is not as though there is a great host of former Republicans who have left the party who would come back to prop up Weld’s position either. According to Gallup polling, the percentage of Americans who identify as Republicans has been roughly stable over the recent past. In July 2014 it was 23% of the American public, in July 2019 that number was 29%.

Former Rep. and talk show host Joe Walsh is a slightly different story. A one term tea party congressman from Illinois, Walsh’s record is stoutly conservative. His rationale for running, is by and large not about Trump’s policy record, but his character. This is, to put it mildly, curious.

In terms of his public statements he has been as outrageous, if not more so, than the President himself. He repeatedly asserted President Obama was a Muslim who was not from the United States, as well as a traitor. He declared that if President Trump did not win the 2016 election, he was going to “grab his musket.”

Since declaring his run, he has apologized for these remarks, and many others. Was this a sincere expression of contrition or a cynical attempt to curry favour with anti-Trump personalities in the media? Who can say? There are many people who, in good faith, have reservations about President Trump’s character. Why any of these people would support Joe Walsh’s bid for the presidency seems beyond me. The most significant difference between the two seems to be this: Donald Trump has actually won a presidential election before.

Another candidate thinking about jumping in the race is former South Carolina governor Mark Sanford. Sanford, you may remember, became something of a joke after he inexplicably disappeared from the governor’s mansion. His staff claimed he was “hiking the Appalachian trail”. In fact, he was visiting his mistress in Argentina. His governorship went down in flames, but he had staged an unlikely comeback to represent a South Carolina house district.

This was before harsh criticism of the president, such as blaming him in part for the shooting of then House Majority Whip Steve Scalise(R-LA), led Trump to endorse his primary challenger, who he lost to. The fact that Sanford couldn’t even beat a Trump proxy in a House primary contest should tell you everything you need to know about his viability in a presidential primary. He at least is realistic about his chances, describing them as “impossible at many levels”. Why he is still considering joining the race, then, is anyone’s guess.

The most recent HarrisX poll of the Republican primary has Trump at 76%, Walsh at 5% and Weld at 3%. A real nail biter, I know. At best, you may see one challenger or another come close in a state or two, such as in 2012, when federal prisoner Keith Judd won just over 40% of the Democratic primary vote against President Obama in West Virginia.

You may not like President Trump. You may blame him for the state of our politics right now. But simply imagine how much worse it would be if a political party, any political party, ignored the will of its voters and refused to nominate a candidate with the overwhelming support of their constituents because some social media pundits objected. Republicans like Donald Trump, and not without reason. He has done or tried to do what he campaigned on, which is unusual even if you dislike or even hate those things on the merits. He is a serious candidate, with a serious chance of winning the 2020 election. That is more than can be said of any of his Republican challengers.