QU injected into the opioid debate 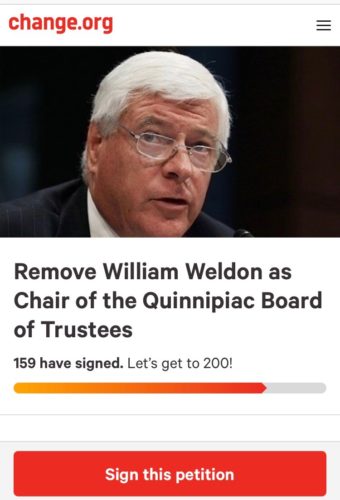 Student Government will hold a debate on Wednesday, Sept. 4, on what they should do regarding a petition calling for the removal of the head of the Quinnipiac Board of Trustees.

The Change.org petition, which was spearheaded by a Quinnipiac graduate, has gathered over 150 signatures. It calls for William Weldon to be removed from his chairmanship after a court in Oklahoma found that Johnson and Johnson, whom Weldon served as Chief Executive for from 2002 to 2012, had intentionally misled the public about the dangers of opioids. The court ordered the company to pay $572 million to the state.

In a meeting between top SGA officials, it was decided that the debate would be included in the official business as a way to promote openness.

“We all ran on transparency and accountability,” SGA President Austin Calvo said. “We decided it would be better to get it out in the open and discuss it.”

Calvo did not give his personal opinion, but said that he would respect the wishes of the senate and would not stop a vote if the governing body demanded it. 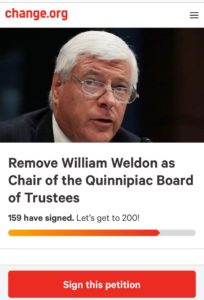 Johnson and Johnson denied any wrongdoing and plans to appeal the decision.

Jack Onofrio, a member of the class of 2019 and former SGA senator, started the petition on Aug. 26.

“Weldon has no place at the forefront of Quinnipiac’s management,” the petition stated. “It is an embarrassment to every member who has struggled with, and lost friends and family to opioids. Regardless of his success in the business world, Quinnipiac must send a message that Weldon and his antics do not reflect the values of the University.”

“I’m trying very hard to spread the word and get more people aware about this situation, but if people don’t care I’m not going to force people to care about this” Onofrio said. “I just think that the entire health science department at Quinnipiac should be outraged by this news. We are a school that takes pride in producing doctors and professionals in the health science field.”

Onofrio expressed concerns that Johnson and Johnson had caused pain to “thousands” and had purposely misled medical professionals.

Weldon worked at Johnson and Johnson for over 40 years, rising from sales to the CEO position. He was made head of pharmaceuticals in 1998 and he served as CEO from 2002 to 2012. During that time, the sales of opioids steadily increased until there was a small dip in 2012. However, Johnson and Johnson is a famously decentralized conglomeration that has traditionally grown by buying profitable companies and then letting them be.

The state alleged that the company worked with poppy growers in Tasmania and supplied 60% of the opiate ingredients used for opioids like oxycodone. The state also alleged that there were 18 million opioid prescriptions written in the state of Oklahoma between 2015 and 2018. Oklahoma has a population of 3.9 million.

Weldon and his wife both graduated from Quinnipiac in 1971. They made a $15 million donation to Quinnipiac last year