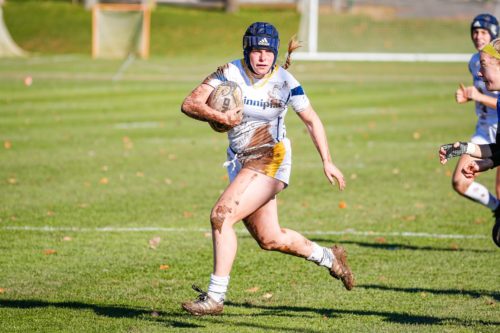 In the first home game of the season, the Quinnipiac women’s rugby team could not snap its losing streak against the Harvard Crimson, as the team lost its fourth consecutive game by a score of 57-10 Saturday afternoon at the Quinnipiac Rugby Field. 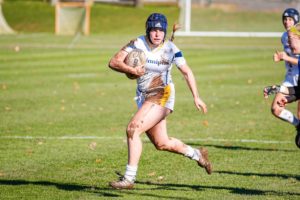 [/media-credit]Quinnipiac head coach Becky Carlson was happy about how the team played at the beginning of the game and how they controlled the game.

“I saw energy from the beginning of the game, and that’s something we talked all week that we wanted to do defensively,” Carlson said. “That’s what you saw. There was a one try difference for a good 20 minutes and that was something that we were excited about.”

The Bobcats started off hot, as sophomore back Allison Koenig took the first possession the Bobcats had to the tri-zone, scoring for the first time this season. It seemed as if the Bobcats were going to continue this momentum for the rest of the half.

RUG: The Bobcats waste no time, as sophomore back Allison Koening scores for the Bobcats first on the opening drive.

This was the case until 10 minutes later, when sophomore Cassidy Bargell responded with her first score of the season. This, with the conversion, put the Crimson ahead 7-5 with a little more than 30 minutes left in the first half.

The Crimson did not look back after this point, as they scored four minutes later, this time from sophomore Sofie Fella, scoring her first try of the season and putting Harvard up 14-5 with 26 minutes left in the half.

From this point on in the first half, both teams were at a deadlock, as each were trying to create opportunities off penalties and mistakes made by both sides. It was not until the ninth minute when Fella struck yet again, pushing the lead to 16 as halftime was approaching.

Before the end of the half, the Crimson scored again, as junior Arianna Romero scored for the first time this season while missing the conversion, pushing the lead to 21-5 before halftime.

“I felt like I needed to make a couple of adjustments at halftime so that we could stop them from scoring,” Carlson said.

Early into the second half, the Crimson kept on rolling, as senior Delia Hellander scored five minutes into the half, pushing the lead to 28.

RUG: At the end of the first half, the Bobcats are down 26-5. Quinnipiac has one try, while the Crimson have four tries and three conversions.

The Crimson struck again, increasing their total to 33 by ways of a scrum.

Neither team scored for a while until the middle of the second half. First-year Brogan Mior scored, Crimson’s seventh try, making the chances for a Bobcat comeback slimmer as the lead rose to 40.

Romero put the nail in the coffin when she scored just eight minutes later, putting the Crimson up 52-10. At the end of the game, the Crimson struck once more courtesy of junior Sabrina Kim, pushing the lead to 47.

Carlson mentioned that seven of her nine Bobcat freshmen played in the game and talked about how they need to duplicate good behavior in order to see positive results.

“I think they need to learn that when they do something good, they need to duplicate that,” Carlson said. “Right now, there are a lot of players looking at the coaching staff saying ‘is that good?’ and they need to learn to tell the difference if they did good or not while performing. If they do this, they will continue to repeat success and do better.”

The Bobcats look to bounce back with a win as they play the Penn State Nittany Lions Saturday, Sept. 7, at the Quinnipiac Rugby Field at 3 p.m.