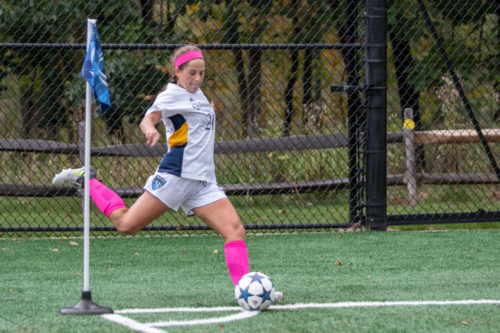 Both defenses brought their A-games, but both offenses started to settle in as the game progressed. In the 75th minute, Quinnipiac freshman forward Rosie Weaver went hard into the opposing 18-yard-box and collided with Rhode Island freshman goalkeeper Teresa Morrissey. The referee determined the foul to be on Morrissey, and that gave Quinnipiac a penalty kick.

Goldring took the shot for Weaver and capitalized to score her own and team’s second goal of the season. Goldring’s early production has definitely caught the attention of head coach Dave Clarke.

“[Goldring] is one of the top scorers, if not the top scorer over the past year,” Clarke said. “She was never 100 percent last year because of her ankle and operation. She missed the whole spring, so we’re easing her back in, so there’s no doubt about her quality. With the players around her, hopefully they’ll create more chances. It wasn’t the best penalty, but she did what she did and it went exactly where it needed to go.”

WSOC: Goal! as junior Kelsey Goldring scores her and the Bobcats second goal of the season to put Quinnipiac up 1-0.

Once again, it comes at a unique opportunity as the Bobcats were granted a penalty kick off a trip inside the box. Goldring took the shot for a teammate.

Goldring followed up by crediting her team and the intensity they showed throughout the game.

“Honestly, it’s all about the team,” Goldring said. “If my teammates didn’t put the ball in those positions, then I wouldn’t be scoring those goals.”

URI came into the matchup with a similar start to Quinnipiac. They defeated the University of New Hampshire 1-0 in overtime.

URI has had a similar start to the season. Just like the Bobcats (1-0 over Bryant), they defeated the University of New Hampshire 1-0 in overtime. That was its first win since September 14, 2017 (defeated Albany 2-1).

With that in mind, they brought a chip on their shoulder to prove that the numbers don’t matter. That mindset led to a total of three yellow cards and very physical style of play. Clarke admired the way his team battled against it throughout the contest.

“They stood up to them,” Clarke said. “I wasn’t happy with how we reacted and putting ourselves in pressure situations when there’s no need. Teams have to do what they have to do, and if they bully you, you have to match it or else you lose the game 1-0.”

Another challenge the Bobcats are presented with are the 11 new freshmen they have on the roster. Being two games through, one freshman who’s stuck out in particular is freshman goalkeeper Meaghan Phillips.

Phillips was thrown into the fire because of an injury to senior goalkeeper Olivia Myszewski. In two career games, she has two career shutouts and is still learning Quinnipiac’s style of play.

“She’s listening,” Clarke said. “You want sponges coming in and she’s definitely a sponge. She listens to [Assistant Women’s soccer coach] Sarah [Thompkins], she’s very self-critical and has great self awareness. She’s very demanding of the upperclassmen, but once she finds her voice and I really trust her, she’ll get even better.”

While the defense has been the story, the offense did finish the contest with five shots on goal and 11 shots total.

The 11 freshmen will get to experience another first, as Quinnipiac will play its first road game on Sunday Sept. 1 against Loyola University Maryland at 1 p.m.