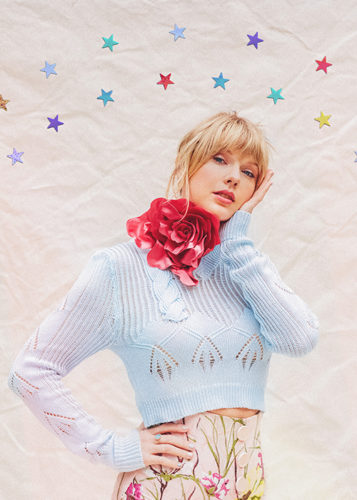 Taylor Swift’s “Lover,” released Friday, is a return to form both stylistically and in persona. The seventh studio album comes after a long promotional campaign featuring the release of two singles, “Me” and “You Need to Calm Down.”

The last time we saw Swift she had boldly declared “a new Taylor” and that “the old Taylor was dead” with her sixth studio album, “Reputation.” She had run into a state of overexposure with the non-stop success of her singles and public feuds with Kanye West and Kim Kardashian. The general public had turned on her; she was no longer America’s sweetheart. “Lover” is a clear departure from that persona, ‘the new Taylor,” and a return to ‘the old Taylor.”

The lead single was released back in April and it was titled, “Me!” featuring Brandon Urie. This track comes off as cringey and misguided looking at Swift’s past work. “Me!” features such silly and childlike lyrics such as “spelling is fun” and “you can’t spell awesome without me.” It’s a fun, upbeat track, but it probably should have spent a little more time in the recording studio. How this made it all the way up to lead single status is shocking when hearing how great other tracks are.

The second single, “You Need to Calm Down” is better than “Me!” but not by much. The production sounds too much like Lorde’s “Royals,” probably because both songs are produced by Joel Little. The track is meant as an ode to the LGBTQ community. The music video features  out and proud celebrities such as Ellen DeGeneres, Laverne Cox, Todrick Hall, Billy Porter and many more.

While it is great to see Swift give a spotlight to a marginalized community, it’s hard not to cringe at the lyrics that put Swift’s drama at the center like “but I’ve learned a lesson that stressin’ and obsessin’ ’bout somebody else is no fun/ And snakes and stones never broke my bones.” If you’re going to attempt an LGBTQ anthem in the vein of Lady Gaga’s “Born this Way” or Ariana Grande’s “Break Free,” then maybe consider putting that community first and not referencing how everyone called you a snake at one point in time.

However, despite the lack of quality on the first two tracks released, there is a lot to love on “Lover.” One of the standout tracks is “Cruel Summer,” which is written by Swift, Jack Antonoff and St. Vincent. The song is about a hard-hitting time in the songstress’s life. It sounds like the type of track that could easily appear on Swift’s “1989” with its luscious synths. It’s hard to figure out why Swift didn’t release this track earlier as it is one of the best songs on the album and maybe even in her career.

Another standout track on the album is “Miss Americana and the Heartbreak Prince,” one of the more interesting titles in her career. This beautiful track sounds like a mixture between the typical production of a Halsey song and the dramatic tendencies of Lana Del Rey. Surprisingly, it works for Swift, using their styles to create something of her own.

Swift is at her best when she slows the show down and gets vulnerable. This is never more evident than on “Soon You’ll Get Better,” which features the Dixie Chicks singing backup vocals. The song details Swift’s feelings regarding a loved one who is sick. It is a track that sends chills down your spine and gives you goosebumps. In the past, I have always been more impressed with Swift’s songwriting skills than her vocal skills. But it is here on this track that her vocals really shine with Swift giving a layered and emotional vocal performance.

The album is also feels a little long with it’s 18 tracks, the most for any Taylor Swift album. Some tracks could have definitely been cut, particularly in the back half of the album. But it is still nevertheless an enjoyable pop album from one of the industry’s greatest hit makers.

“Lover” is a great step forward in lengthening the career of a mega popstar. However, while this album is a vast improvement over “Reputation,” with its warmer tones and happier notes, it doesn’t reach the heights of “1989” or “Red.” The album has many moments that showcase Swift’s many talents but with the high standards set by her previous material, it’s hard to reach back up to those heights.