QU ranks No. 1 for colleges with ‘Little Race/Class Interaction’ in Princeton Review 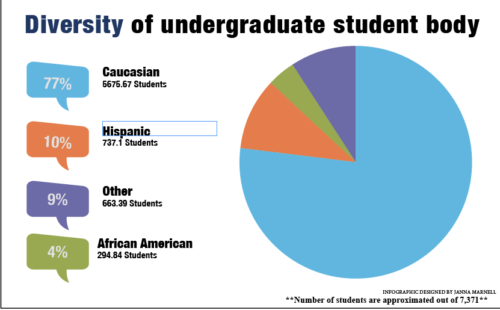 Over thee-fourths of the undergraduate student body is Caucasian according to the Princeton Review.

Except, Quinnipiac’s student responses to a survey conducted by the Princeton Review for its 2020 edition of “The Best 385 Colleges,” indicates that there isn’t much mingling going on.

Quinnipiac ranked No. 1 for colleges with “Little Race/Class Interaction” based on how strongly the surveyed students agreed or disagreed with the statement, “Different types of students (black/white, rich/poor) interact frequently and easily.”

The Princeton Review’s survey results, which were published in August 2019, were based on the data from its surveys of 140,000 students at the 385 schools in the book.

Leaders at Quinnipiac such as Associate Dean for Academic Affairs and Chief Diversity Officer Don Sawyer met after the report was released to discuss potential remedies for the lack of interaction between the races and classes on campus.

“It’s the one time where you don’t want to be number one,” Sawyer said. “I don’t want to say it’s an easy fix, but I don’t think it’s the most difficult thing to address. If we look at what’s laid out in the strategic plan, I think we have a chance to be intentional about what programming effort we have that allow students to have conversations in those spaces.”

The Princeton Review conducts a survey annually about colleges across America. The survey is conducted online and approximately 359 students from each school surveyed respond. Surveys can be completed at any time in the academic year.

Quinnipiac has been on the “Little Race Class Interaction” list for eight of the past 10 years and in the top 10 for seven of those years according to the Princeton Review’s publicist Jeanne Krier.

Quinnipiac students are 77% Caucasian, according to the Princeton Review, and Sawyer said the small number of diverse students could play into why they are interacting less.

“Part of it may be representation, the actual number of people that we have on campus,” Sawyer said. “But I think beyond that there can be intervention even with the current numbers that we have.”

Esau Greene, vice president of the Quinnipiac Black Student Union (BSU), said that when people of color decide to come to Quinnipiac, they come with the knowledge that they’re going to have to go out of their comfort zone to make friends with other races.

“I think most people that come here understand that the world we live in is not always made to meet our needs and what we are most comfortable in,” Greene said. “They’re used to being uncomfortable.”

Cassandra Reyes, treasurer of the Quinnipiac Latino Cultural Society (LCS), said that often, students of different nationalities who do want to interact with others at Quinnipiac have to hide their ethnic identity.

“A lot of people with different nationalities will hide, or deny it in a way,” Reyes said. “Do it just like, to fit in. I see that a lot.”

She said LCS is a place where people don’t have to disguise their background to fit in.

“What we do in LCS, is make it so you don’t have to hide who you are, where you came from,” Reyes said. “It should be accepted. You should be proud of your roots. It’s a great way to educate other people.”

Reyes said another part of the problem is that many people don’t even know that multicultural organizations like LCS exist at Quinnipiac.

“I’ve had someone come up to me and say ‘Oh it would be really cool if there was an organization that talked about different races and cultures,’” Reyes said. “And I’m like, ‘There is one.’”

Sawyer said the university is devising a set of plans to work on increased race and class interaction.

“We are going to be expanding the Place at the Table conversations. We are also going to be developing and implementing the intergroup dialogue model,” Sawyer said.

The intergroup dialogue model came out of the University of Michigan. Sawyer said it works on building scenarios for people of different backgrounds to have interactions.

Sawyer noted that many Quinnipiac students come from similar backgrounds which was in line with what many students said on the survey in the Princeton Review.

Student comments on the survey noted that most of the “not very diverse students” at Quinnipiac come from New York, New Jersey, Connecticut and Massachusetts and tend to be from upper-middle to upper-class families.

“It doesn’t have to be an intentional decision to say, ‘No I’m not going to hang out with that person because they are poor,’” Sawyer said. “It can also just be where you live and what you have access to.”

Reyes said that coming from a middle-class makes it hard to relate to some students here.

“They might think less of you because you’re not at their status,” Reyes said. “There’s less social opportunity to interact if you don’t have the funds to contribute.”

While Reyes came from a diverse high school and is used to interacting with all different kinds of people she said she does feel most comfortable with people who are similar to her.

“I do feel like it’s easier for me to get along with people that are the same race because I’m more comfortable and we have more things in common,” Reyes said. “But I’m always open to new people.”

Greene said that while diversity in people of color might not be Quinnipiac’s strength, it has many others.

“Diversity in terms of thought, background–you get to immerse yourself and use your strengths in other areas,” Greene said. “It’s always a challenge to put yourself in situations you’re not used to but that is how you grow.”