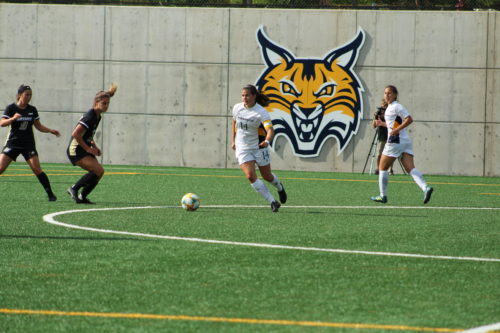 The Quinnipiac women’s soccer team began regular season play on Sunday, August 25 with a nerve-racking 1-0 victory over the Bryant Bulldogs in Hamden.

It was redshirt-junior forward Kelsey Goldring that found the back of the net in the first two minutes of extra time.

“We go forward because that’s how we get our opportunities,” Goldring said. “We don’t want to invite the pressure. We have fast players up top, skillful players up top. As long as you go forward, we have options that way.” 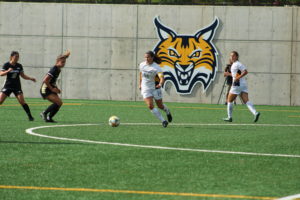 [/media-credit]Despite taking over 91 minutes to score, the Bobcats took control of the game early. Quinnipiac fired three shots on junior goalkeeper Meghan Dalton within the first six minutes, while it took nearly 10 minutes for Bryant to get its first shot.

The fast pace of play and ability to maintain possession allowed the Bobcats to take advantage of the Bulldogs in the first half. The half ended with Quinnipiac holding 57 percent of the possession to go along with five shots on target.

“We’re not a long ball team,” Quinnipiac head coach Dave Clarke said. “If you look at it, Kelsey [Goldring] is small, [sophomore midfielder] Selena [Salas] we still have to work back in – probably one of the best players in the league – [freshman midfielder] Markela [Bejleri], they’re all technical players, so there’s no point in launching a ball. It’s got to be based on possession and trying to give them the ball.”

The second half saw less dominance in possession from Quinnipiac as both teams were eyeing game-winning opportunities. With just under 17 minutes left, Bryant slipped away from the Quinnipiac backline and sent a shot on goal. Freshman goalkeeper Meaghan Phillips was too quick, forcing the ball to roll wide left of the left post.

Clarke used the first game of the season as a way to have the 11 freshmen learn the tactical aspects of the game. The team finished the game with seven freshmen on the field, one of which was Bejleri who assisted Goldring on the game winner.

First game of the season is a wild one. From honoring head coach Dave Clarke for 20 years at Quinnipiac to an extra-time thriller on the pitch #MAACSoccer https://t.co/jEyO5Xa2Lp

A mix of the senior’s experience and the freshmen’s youthful legs is a recipe for “fun” and a “rollercoaster season.”

This upcoming season is Clarke’s 20th at Quinnipiac, and he was honored prior to the game. Despite this, he was more focused on looking forward to the end of the season.

“We won a game in overtime,” Clarke said, “kept a clean sheet, they got a goal with freshmen playing huge minutes, so they can build on that. For me it’s more about moving forward [and] about the team.”

The Bobcats face off against the Rhode Island Rams on Wednesday, August 28 at 4 p.m. The two last faced off in 2010 when the Bobcats took a 1-0 win. Clarke eyes to build on the momentum and grow going forward.