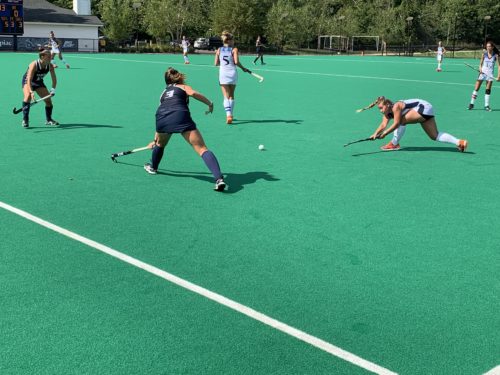 The Quinnipiac field hockey team wrapped up its preseason on Thursday, Aug. 22 with a 1-0 victory over the visiting University of New Hampshire Wildcats.

“We found an identity,” Quinnipiac field hockey head coach Becca Main said. “We know what we’re good at, we know what we need to work on. This team is trying to take every moment, every step at a time.”

Through the first half, there was little offense to speak of. The first quarter ended with three shots on goal for the visiting Wildcats, with the Bobcats managing just one. 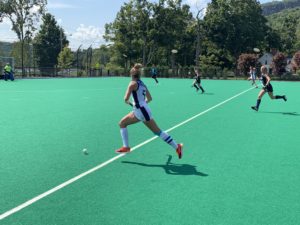 Martinez did an excellent job trapping the ball and maintaining possession. Once gathered, she raced down the middle of the field virtually uncontested. She beat the one defender that challenged her and ripped a shot from the top of the circle, but it was nicely deflected wide left of the goal, keeping the score tied at 0.

Another great chance came with 6:30 remaining in the half. Freshman forward Eva Veldhorst made a spectacular play to intercept a New Hampshire pass. She quickly passed to senior forward Amanda Blum, who gave the ball back right away on a give-and-go type of play.

“We were working on finding the two v. ones,” Adams said. “We were really working on not doing one v. ones and using your teammates and like one touch passes. I think we really executed that today.”

Despite the impressive ball movement, the pass ended up just out of the reach of Veldhorst, who couldn’t catch up to the pass and watched as the ball rolled its way out of bounds. With no goals at the end of the first half, both teams came out with something to prove in half number two.

The Bobcats must have had some kind of halftime speech, because they came out aggressive in the third quarter. They dominated possession and found themselves with chance after chance, but just couldn’t seem to force the ball into the net.

FH: With 6:30 remaining in the third quarter Quinnipiac looks to be establishing an edge. They've outshot UNH this quarter and put two of those shots on goal, dominating possession as well

It wasn’t until the fourth quarter when the scoreless tie was broken. Adams played patient defense, keeping her distance from the ball carrier despite the cries from fans to pressure the ball.

When the pass was sent off, Adams intercepted the ball and started the attack. She found a teammate who lost the ball, but Adams challenged again, more aggressively this time, and won possession back. From there, Adams found herself with the ball in a great position and took full advantage of the opportunity she was given.

“I got the ball on the left side and I went around the t-spot,” Adams said. “That’s where the circle meets the end line, and that was one of our top points was to hit the t-spot. And so I saw I was open, so I ripped it there and slipped it through the goalie’s legs somehow.”

The Bobcats weren’t done yet, however, as they had to hold on for the final 5:08 of the game. The Wildcats applied some great pressure and sent fear into the hearts of all Bobcats as the game approached it’s close.

With three seconds left on the clock, New Hampshire took a corner. After a quick pass, a shot was fired from the top of the circle. It soared towards the goal and past freshman goalkeeper Mack Vorel, finding its way in.

FH: After an eventful final 10 seconds, Quinnipiac holds on to its lead to win 1-0 over UNH

The goal was quickly called off as it was ruled too high, hitting the net rather than the solid base like it’s required to on a corner. The Bobcats managed to hold on for the 1-0 victory and enter the regular season on a high note.

“Not supposed to talk about it, but I’ve been planning [the trip out west] for about 18 months,” Main said. “So you can imagine how I’m probably going to be feeling once I get through dinner tonight and five more days. But it’s really going to be an opportunity to play very high-level teams.”