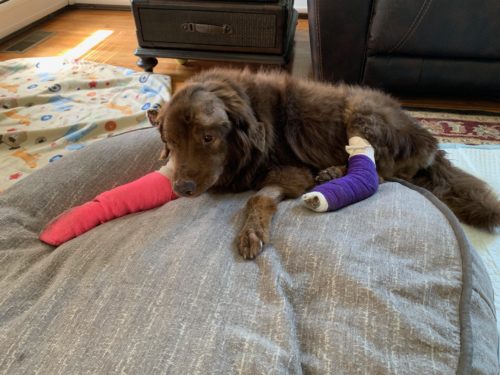 When Chris Roush relocated to Hamden, Connecticut, less than a month ago to become the new dean of the Quinnipiac School of Communications, he didn’t think his dog Sadie would be the one to make a name for him at the university.

“What I’ve noticed is when I meet someone on campus, I’m no longer the dean of the School of Communications,” Roush said. “I’m just Sadie’s dad.”

Sadie, a 17-year-old Chesapeake Bay Retriever, gained statewide attention on July 27 when she and Roush were hiking at Sleeping Giant State Park on the Tower Trail and she slipped out of her leash, spurring dog-lovers across Connecticut to begin searching. Sadie was missing on the trails for five days before she was found. 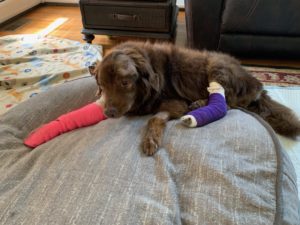 [/media-credit]“I posted something on Twitter and Facebook that I had a dog missing in the park and it was almost immediate with people that wanted to come out and look for her,” Roush said.

The community’s outpouring of support included daily emails from President Judy Olian, authorization of the Quinnipiac drone for search purposes and countless Connecticut residents and Quinnipiac professors hitting the trails in hopes to catch a sight of Sadie.

“I’ve only been here two weeks and the fact that people from Quinnipiac and people from Hamden and frankly people from all over Connecticut took an interest in Sadie and wanted to find Sadie, was just amazing,” Roush said. “My wife and I have been overwhelmed with the support.”

Roush, who was previously a Walter E. Hussman Distinguished Professor at the University of North Carolina Chapel-Hill, became the SOC dean on July 22.

“I just find it really amusing,” Roush said. “I’m now known for being the dad of a dog rather than what I’ve done in academia.”

Sadie is currently at Roush’s home recovering after spending a few nights at VCA Cheshire Animal Hospital. The story of Sadie’s infamous rescue and the harrowing search is one that those involved will never forget.

Roush’s social media efforts attracted the attention of groups such as Dogs and Drones and CT Doggone were involved in the hunt for Sadie, but ordinary heroes unaffiliated with organized search parties ended up being the real heroes.

At 6:30 p.m. on July 31, Roush heard about a Facebook post from two hours earlier which alerted him to whining and howling heard near the Green Trail at Sleeping Giant.

It was a stormy evening, and thunder rolled overhead as Roush made the soggy trek up to the spot the Facebook post had detailed.

When he got there, two men, Russell Lewis and Steve Tobey, were already there.

Tobey, of North Haven, said he decided to organize some rescue efforts of his own after seeing very little organized searching taking place. He collected a group who agreed to meet up on Wednesday, but the storms scared them off.

“I went down to the spot where we were supposed to meet and no one was there,” Tobey said.

But Tobey wasn’t scared off by the ominous weather. He said believed the universe intervened at this moment and led him to the spot where Sadie was eventually found.

“I got out of my car and the storm started and it was thundering and lightening like crazy,” Tobey said. “I’m trying to remind myself, ‘Don’t send out fear, send out hope.’ Energy wise. Be positive. I was trying to focus on this dog.”

While the universe may have motivated him to keep searching, Mother Nature was working equally as hard to convince him to give up.

“Eventually the storm was bad enough that I couldn’t see through my glasses,” Tobey said. “I couldn’t hear because the rain was so loud in the leaves, thunder and lightning. I just was begging the universe, asking God, ‘I am not going to be able to hear or see this dog in this weather, you’re going to have to help me.’”

Help did come, in the form of persistent barking from up high on a ridge of massive boulders, only 30 or 40 feet from where Sadie was last spotted. Tobey thought, at first, that it seemed too good to be true.

“Boom, boom boom the three of us are there,” Tobey recalled.

Professor Laurie Grace and Dean Danielle Reinhart of the School of Communications also arrived on the scene.

“Finally I was 100 percent sure this is where the dog was,” Tobey said. “[Roush] walks up but Sadie stops making noise before she gets there so he wasn’t that hopeful. He didn’t hear the dog. I was like ‘[Roush], your dog is right under the ground right here. This is her.’”

“After a minute, I heard it too,” Roush said.

The group identified Lewis as the only one small and athletic enough to enter into the small, deep crevice that Sadie was wedged within.

“The first time he went down, me and [Tobey] held each of Russell’s legs and he went into the hole headfirst,” Roush said. “It was about 7 feet deep.”

Tobey said it was again the universe who sent Lewis to the site of the rescue because he had the perfect stature and mentality to save the day.

“The next person that shows up is this thin, fit guy who has the physicality to just go into the hole and plus he’s a surgeon who has the mentality to save lives,” Tobey said.

Roush called the Hamden Fire Department, but by the time they arrived on the scene, the group had extracted Sadie from the hole. The fire department brought a stretcher to carry Sadie down the mountain that had held her hostage for the past several days.

President Olian, who Roush described as a ‘big dog person’ tweeted out her relief and excitement after Sadie’s rescue.

Roush thanked all of the members of the community who came out to help, but had extra gratitude for Tobey and Lewis.

“To me, they’re the real heroes,” Roush said.