Residence halls to be closed due to asbestos 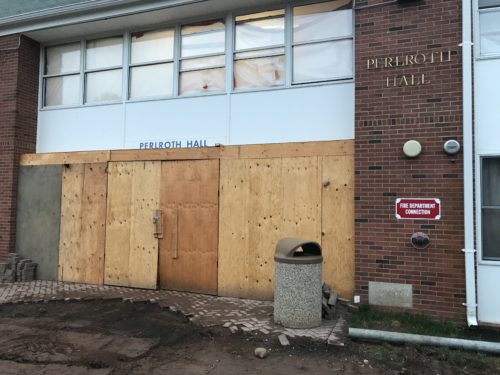 Perloth will not be housing students in the upcoming school year as planned due to asbestos removal.

Sophomores left Quinnipiac this May relieved that the stressful housing selection process had ended.Today, their worries were rekindled.

The email, which was from Mark DeVilbiss, director of residential life, said that the residence halls “are not available for occupancy during the 2019-2020 academic year as previously planned.”

The university stressed that while the asbestos was not dangerous while it was undisturbed, they will be removing all asbestos from the residence halls during renovations.

Sophomores are being relocated to Mountainview, Founders and Crescent residence halls. The school is offering a $1,000 housing credit for the 2020-21 academic year, an upgraded parking pass with Mount Carmel privileges for those being moved to York Hill and no additional cost for those who will be receiving a kitchen.

Resident Assistants that will be affected will be reassigned in Crescent, Founders, Mountainview, Village, Sahlin and Irma.

Mikaela Iommazzo, sophomore occupational therapy major, was supposed to be moving into Larson in the fall, and that wasn’t even her first choice. Once she learned she was going to be getting air conditioning and could live with her friends, she was willing to settle. But now, she’s mad.

“Now with the changes, everything is a mess,” Iommazzo said. “And now I’m on a totally different campus. I understand that some sophomores are living on Crescent, but we went through this whole process from a group of seven to then overnight finding another person to find a group of eight. And now we are here and have a group of six and I don’t have the whole group of people with me that I want to live.”

Asbestos is a natural mineral that had been used for centuries. In construction, it was a commonly used insulator. However, it was discovered that even though the mineral is safe when undisturbed, it can cause a wide variety of chronic illnesses and in extreme cases, a very aggressive form of cancer known as mesothelioma. It is now illegal to use in construction.

Although it is no longer used in construction, it is very common to find in buildings built before 1980. A licensed specialist is required to remove the asbestos. Although the asbestos is not required to be entirely removed, Quinnipiac announced that all asbestos would be removed from the halls currently being renovated.

Stay with The Chronicle for updates on this developing story.