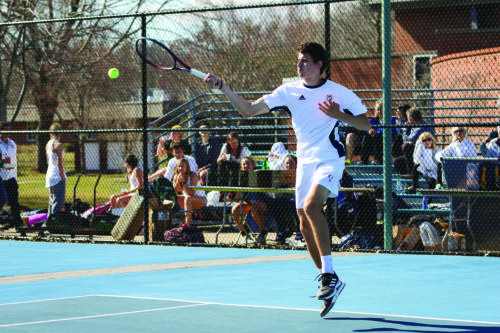 Living out one’s dream isn’t always simple, especially when that dream is 4,000 miles away. In Quinnipiac men’s tennis freshman Aleksa Martinovic’s case, he made his dream a reality.

“Since I started going to high school, my dream was to come to America to play tennis,” Martinovic said. “I didn’t know about any college or anything, I just wanted to come.”

Martinovic grew up in Novi Sad, Serbia playing soccer until he was 10 years old when his mother convinced him to take up tennis. His mother feared Martinovic didn’t have the proper build for soccer and might get injured on the pitch.

It didn’t take long for Martinovic to develop a strong skill set and passion for the game of tennis. Since turning 14 years old, he began training for five to six hours a day and traveling to different cities and countries to play tournaments.

Again, it was Martinovic’s mother who influenced him to partake in these tournaments.

“It just was my mom,” Martinovic said. “She was like, ‘You should try to play some tournaments.’ So, I went to some tournaments. My coach was also playing at that time, so I was traveling with him, playing tournaments with him. I really liked it.”

Martinovic played in multiple pro tournaments before attending Quinnipiac. However, in order for him to maintain his NCAA eligibility, he registered as an amateur so he would not receive prize money. This is fairly common in foreign countries since many don’t have a college-esque development league for amateurs. 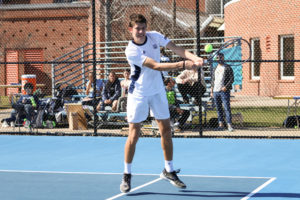 As an amateur in Serbia, Martinovic placed third in the U14, U16 and U18 tournaments while also winning the Winter State Tournament in Vojvodina four times. In addition, he played in multiple tournaments in Greece, Egypt and Macedonia garnering a high European Tennis Association ranking of No. 299 prior to becoming a Bobcat.

“It was a great feeling seeing other guys from all over the world playing,” Martinovic said. “Top 300 guys in the world, you see them play- ing every day, practicing. You hit with them from time to time. It was a big experience to me, and I would do it again.”

Martinovic’s success in tournament play around the globe is what gifted him the opportunity to live out his dream of playing tennis in America. Towards the end of his high school career, he began to look for colleges within a two-hour radius of New York, so he could travel back to Serbia easily.

Quinnipiac, located in Hamden, which lies within Martinovic’s two-hour radius of New York, was a school that Martinovic had his eye on.

In late 2017, Quinnipiac men’s tennis head coach Chris Pappas began recruiting Martinovic to Quinnipiac. The two continued talks through the winter and into the spring as Martinovic was finishing exams.

During this recruitment period, Pappas had a chance to watch Martinovic play, and he admired the way Martinovic competed. Pappas knew that he would fit well in the MAAC.

Along with his style and skill set, Martinovic brings a lightning rod of energy to every match. The competition fires him up which has been problematic with former coaches. Throughout his freshman season, Martinovic has faced the challenge of transforming his intensity on the court from a distraction into a tool. 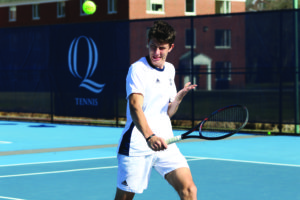 “It’s something that we have to continue to make sure he understands how to learn from it and not waste energy on unnecessary emotion,” Pappas said. “I think it’s a work in progress.

“We just have to keep molding it because the last thing I want to do is take away the fire and emotion he plays with. But we also have to make sure we’re putting it in a way that’s constructive and positive, and that’s part of the growth experience.”

This intensity, although seen as negative to some, has been beneficial to Martinovic. He has succeeded at No. 2 singles, finishing 13- 15, as well as No. 1 doubles with junior Axel Stern. The two finished the season with a 4-1 record in MAAC play and were named Second Team All-Conference.

Playing at a high level means a lot to Martinovic. As soon as he stepped foot on the Quinnipiac hardcourt, his game quickly blossomed.

“It was an honor,” Martinovic said. “It’s a big thing because I’m a freshman. I tried to adapt to it. I played some older players, some good guys. I tried to see what they are doing to be ready for next matches for next year. I think I did an OK job.”

Despite competing at a high level through-out his tennis career, Martinovic didn’t always believe he was that good. He was surprised to beat some of his opponents in Serbia and would scream on the court in attempt to throw the opposition off.

Although the raw passion is still in Martinovic’s game, he has gained confidence in himself and has begun to focus on becoming a team player, now that he’s playing for Quinnipiac and no longer individually.

“Back home, I would lose, and it’s just me,” Martinovic said. “Here, I play for college, so it’s much more than what it used to be at home. So, I’m trying to get 100 percent of myself every time because as I said, it’s for other guys and for me also.”

Martinovic, despite being just a freshman in college, is more than just a regular kid that picked up a racket. He’s developed his skills and gained a love for his team and teammates, all while maintaining the passion that makes him so unique. His growth and most importantly, his 4,000-mile dream wouldn’t have been possible without the help of Pappas and his eight other teammates at Quinnipiac.

“When I contacted Chris [Pappas], I was like, ‘The college looks so good,’” Martinovic said. “I like him, I like the other guys. They texted me. I talked with them, and I decided that this should be the right place for me, and it is.”