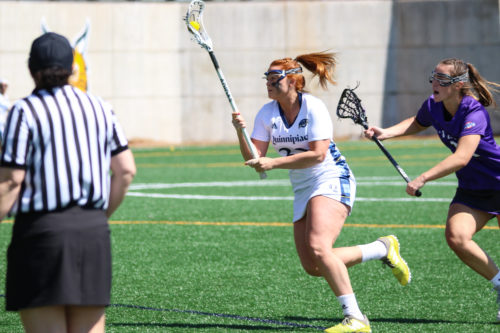 As the school year comes to an end, the players and coaches who were responsible for some incredible moments and seasons deserve some recognition. Sports Editors Brendan O’Sullivan and Jared Penna, along with Editor-in-Chief Bryan Murphy give their picks.

What can I say? Graduate student guard Cam Young was nothing short of phenomenal. He shattered NCAA records en route to unanimously winning the MAAC Player of the Year. He finished the season with 728 points, the most ever by a Quinnipiac Bobcat in Division I history. -B.O.

Senior attack Allison Kuhn put up monster numbers in her senior year. In helping her team match its best record since 2013, Kuhn scored 43 goals and recorded 18 assists to score 61 points on the season. She scored three of her team’s five game-winning goals this season as well. -J.P.

When the Quinnipiac women’s ice hockey team needed a goal, it could rely on senior forward Melissa Samoskevich. She finished first on her team in points (22), goals (13) and game-winning goals (five). She graduates as one of most dominant goal scorers in Quinnipiac history. -B.M.

Tricia Fabbri is simply a winner and this season proved this even more. She led the Bobcats to back-to-back undefeated regular seasons, five straight MAAC regular season titles and most importantly, the illustrious MAAC Championship three-peat. – B.O.

Eric Da Costa led his team to an 8-1-1 conference record this season, good for second in the conference. The team reached its second championship game in three seasons and nearly came away on top. Da Costa deserves a lot of credit for what he’s accomplished with this program. -J.P.

This season, Rand Pecknold improved the team’s win percentage from .421 to .684 in one year. Pecknold guided the team to the regional finals in the NCAA Tournament, a share of the Cleary Cup and a No. 7 final national ranking, and earned his 500th career win. -B.M

It’s not often that a freshman leads a team in wins, but for the Quinnipiac men’s tennis team, freshman Alester Magalit was that guy. He won 17 games in singles play en route to being crowned the MAAC Rookie of the Year. He also added a combined 11 wins in doubles. -B.O.

Freshman Kamilla Nella finished the season with the most singles wins on the team, recording 15 victories on the season. She also boasted an impressive 5-1 singles record in the MAAC, tied for second on the team. Nella has established herself as a threat from the very beginning of her career. -J.P.

As a freshman goaltender, Nick DiMuccio has started in all 14 games for the Bobcats so far, recording an 8-6 record with a MAAC-best 14.43 saves per game. With the regular season over, DiMuccio will be a key piece for the Bobcats to make a run at a MAAC championship. -B.M

After losing a combined eight seniors and graduate students, the Quinnipiac field hockey team needed someone to step up. Junior forward Amanda Blum did just that. In 15 starts, she was second on the team in goals (five) and points (13). -B.O.

In 2018, senior reliever Andrew Workman saw 14 appearances, posting an 8.06 earned runs average (ERA) for the Quinnipiac baseball team. This season, he leads the team in appearances with 19, has five saves and a 1.36 ERA, sixth-best in the MAAC. -B.M.