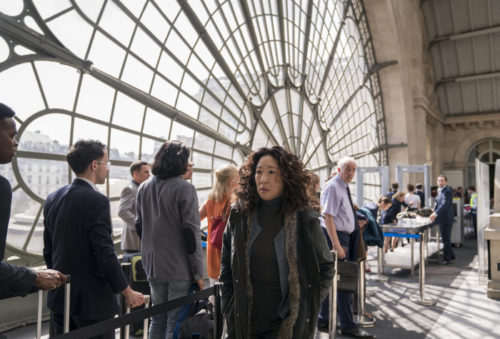 “Killing Eve” has returned to televisions around the world with the start of the second season. The show starring Sandra Oh and Jodie Comer continues the cat and mouse game that almost ended in shock last season.

Last season, after many tense exchanges, both Eve (Oh) and Villanelle (Comer) met and in a startlingly good turn of events, Eve stabbed Villanelle and that is where the season ended. For the past year, fans have been waiting to find out if Villanelle survived and how Eve is reacting to it.

This season began directly after a tension-filled moment. Eve is running out of the apartment as agents swarm the place looking to kill Villanelle. Villanelle’s employers are no longer satisfied with her work and are firing her. This first episode was great for both characters showing off their acting skills as Eve struggles with her guilt of trying to kill Villanelle and Villanelle struggling to survive on her own with fresh stab wounds.

“Killing Eve” has become known for its witty dialogue; a show that knows how to balance comedy in tense situations. The show never seems ridiculous for its sense of glamour and dramatics. It is what makes the show so great. It is a part of its DNA.

The second season saw the rise of a new showrunner for the series with the departure of the show’s creator, Pheobe Waller-Bridge. Concerns rose from fans that the writing would not be as smart and cut-throat from fans. However, that is not the case. The writing is smart, funny and as witty as ever.

“Killing Eve” is a show that keeps its audience on the edge of its seat every single episode. Similar to “Game of Thrones,” the show could kill off any major character in say, episode three while there are still five episodes left in the season. It is a high stakes show; life or death.

Oh, best known for her iconic performance as Christina Yang on “Grey’s Anatomy,” has won a Golden Globe, SAG award and became the first Asian actress nominated for the lead actress in a drama series Emmy for this role. This first episode makes it clear why she got those titles. Oh gives a tour de force performance, one that balances comedy and drama so expertly. She certainly gives a memorable performance that will be remembered for years to come.

Jodie Comer, in addition to Oh, gives a wondrous and magical performance. A performance that is as funny as it is horrifying. Comer’s Villanelle is a menounos but a menounos that the audience is able to sympathize with and care about. Her Villanelle is never the villain, and it is certainly interesting of the show to position a character like her like that. It is even more interesting to see the acting that comes from it.

Another standout performance in the show is that by Fiona Shaw, most famous for her portrayal of Aunt Petunia in the “Harry Potter” franchise. Shaw plays Carolyn, Eve’s boss. Shaw radiates, similar to her “Potter” performance, a stern matriarchal figure. However, this character is more caring and less of a villain. Shaw adds layers to Carolyn, who is supposed to care for Eve while also making sure she stays far away from trouble.

“Killing Eve” has set up one amazing dynamic between its characters — so desperate for each other that they will stop at nothing to get to each other until it kills them. This is definitely a show to watch out for, especially for the strong writing and superb performances.