Could ‘Under the Silver Lake’ reach cult status? 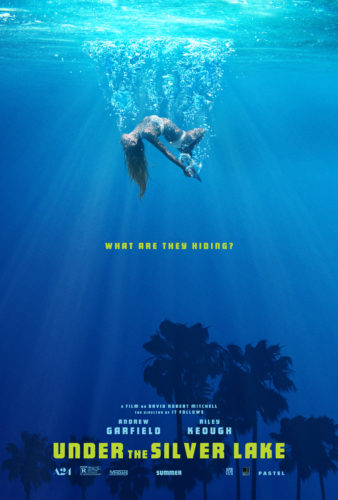 After a rocky response at last year’s Cannes film festival, indie film powerhouse, A24, has finally released “Under the Silver Lake,” a tale of paranoia and pop culture from director David Robert Mitchell, who most notably directed 2015’s horror film, “It Follows.”

“Under the Silver Lake” follows Sam, a 30-something slacker played by Andrew Garfield, who develops a crush on his neighbor Sarah, played by Riley Keough. Sam is quickly obligated to find Sarah as he is then sent on a wild chase all across Los Angeles to find her.

The film is a mile-a-minute thrill and it does not let down after the first act. The whole two hour and 19 minute runtime never leaves the audience bored. In reality, this both aids and hurts the film. While the film starts with a bang and keeps the same energy, the first act seems a little rough around the edges, as the film’s pace is so quick that some time to slow down may have helped the story flow a little bit more organically.

Much like “It Follows,” “Under the Silver Lake’s” greatest strength is its sense of style and tone, both of which are fleshed out by the score and cinematography.

The score by Disasterpiece is reminiscent of the days of early cinema, 40s noir films and the Hitchcock era. The score ranges from subtle to over the top consistently but this can be excused as it is the real driving force behind the suspense of the film.

As a director of photography, Mike Gioulakis does a fantastic job framing and lighting each shots. The film’s intense, psychedelic themes are exposed through lots of handheld and sweeping camera angles, as some scenes gave me feelings reminiscent of “A Clockwork Orange.”

In a few words, “Under the Silver Lake” can be best described as a neo-noir. The mystery takes the forefront among other subplots as Sam quickly jumps to the conclusion that he is being watched and followed.

In true noir fashion, Sam, the protagonist, is the center of every scene, as he’s the audience’s vessel into the story for the entire runtime.

While most leading men in any noir or detective driven film are blunt and stoic, Andrew Garfield portrays a very intelligent, yet awkward and disorganized every-man detective. Garfield’s performance as Sam is very down to earth and relatable while dealing with super abstract and bizarre ideas.

Besides Garfield, the rest of the cast does a great job feeding into the impending sense of doom and paranoia. Garfield and Keough take center stage as the two primary characters, despite Keough’s character’s disappearance being the driving force behind the film.

Supporting actors include Topher Grace, Jimmi Simpson, Riki Lindholme and Callie Hernandez. While none of the supporting characters have that much screen time, their more mellow attitudes play off Sam’s paranoid ramblings very well.

For the past few years, A24 has been consistently releasing acclaimed independent films such as “Ex Machina,” “Moonlight,” “Lady Bird,” “Hereditary” and “Mid90s.” Each one of the mentioned films have a very unique tone and message but are all similarly inventive films despite their variety of genres.

“Under the Silver Lake” continues this trend and is extremely unique and inventive, and while not every aspect of the film works, I would rather watch a film attempt something in a new way, even if it did not quite work.

As previously mentioned, “Under the Silver Lake” garnered a strange response at Cannes, which left most of the audience scratching their head. Because of this response, A24 has been hesitant to release the film.

“Under the Silver Lake” had its release date shuffled around multiple dates in 2018, before being delayed to April 2019 in October. On April 19, the film was finally released but it saw no major theatrical release, being dumped on video-on-demand instantly.

I understand why A24 had so much trouble releasing the film, as it is very intense right off the bat, and as a director, David Robert Mitchell is not afraid to take any risks.

If it got a wider release, I don’t think the film would receive very high praise, and that is okay because it is not a perfect film. At the same time, it is an extremely unique blend of neo-noir, paranoia and pop culture.

While not every beat of the film hits, “Under the Silver Lake” is very engaging and I cannot praise it enough for how unafraid and strange the mystery behind it all is.