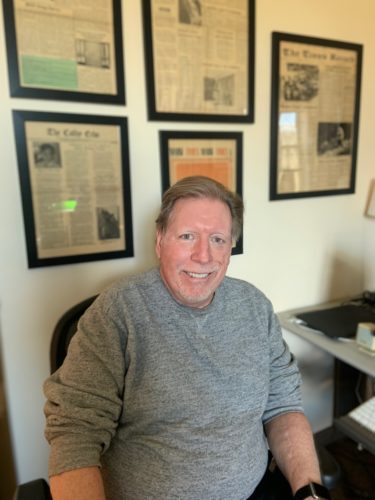 Writing has always been a passion of Kevin R. Convey’s and it is evident right when you enter the door of his newly packed up office. Newspapers line the walls, representing each of the news organizations that he has worked for, showing off his past work.

“One morning after a long night at the newspaper, I woke up and said ‘this is it, this is so much fun. This is it. I’ve got to do this,’” Convey said, talking about the moment he started to love print journalism. “So I did. At that point, I was thinking that I may go to grad school and get my PhD and become a college professor.”

Convey is now finishing up his last year at Quinnipiac University as an assistant teaching professor in the department of journalism before retiring from the school in May. However, this recent decision to leave his current position at the university has not ceased his passion for journalism and teaching writing, which is what he has loved since high school.

“I had been doing journalism since high school,” Convey said pointing out his high school paper that is hanging right behind his desk. “That’s one that got us in trouble. If you could see there aren’t any bylines there because it was our sex and drugs issue and it got us in trouble and the administration wanted to shut us down and fire our faculty advisor. And when they tried to do that, the Boston papers came and started writing about it and then stopped them. So it was actually a very cool lesson in the power of the press.”

After high school, Convey went to Colby College in Maine and continued writing for newspapers there, becoming the features editor for the Colby Echo.
On top of writing for the college newspaper, Convey held internships at other newspapers around the area, which are all represented on the walls of his office.

“The Bangor Daily News was the first internship that I had when I was a sophomore,” Convey said referencing the newspaper clippings on his office walls. “Then I went to Ireland my junior year, so I wasn’t around. I studied at Trinity College in Dublin. Then I came back. Then my senior year I worked for Maine Times, which was in Topsham, Maine. Then I went to work for the Times Record, which was in Brunswick, which is where Bowdoin College is. Then I went to New Bedford and worked at the Standard Times and then from there I went to the Boston Herald. I worked at the Boston Herald for many years, probably 25 years maybe.”

After taking a break from the Boston Herald by working at Boston Magazine, Convey returned to the Herald to become the features editor and Sunday editor. He also became the editor of a chain of a hundred small dailies and weeklies and decided to work for the Daily News in New York starting in 2010 when his publisher decided to sell those papers off.

“In 2012, I parted ways with the Daily News,” Convey said explaining how he started teaching. “I was not getting along with the publisher. He stayed and I left. Then it was kind of like ‘well what am I going to do now?’ Because I hadn’t planned on getting fired. It just sort of happened. So I found that here’s this chance for me to do something else that I might be interested in.”

So, Convey decided to go back to graduate school at the age of 56 to get his master’s degree at the City University of New York’s Journalism School to be able to teach journalism at the college level. Convey. Afterwards, he landed a job here at QU.

“There was a lot of stuff I liked about [Quinnipiac University],” Convey said talking about why he chose to work at QU. “First of all, it reminded me very much of Colby where I went for undergrad. Beautiful location. On my visits here, I was impressed with how bright and how nice the students were. I think probably the most important thing was that I really felt like this was a department that I liked as a starting point and I was going to come in as the chair [of the journalism department] and I felt like I could help the department improve in ways that it wanted to improve to make it stronger.”

Not only that, but Convey also really enjoyed working with the other professors in the journalism department and getting the chance to have a second career.
“Honestly, I considered myself just so incredibly lucky to be able to work here,” Convey said. “It’s a beautiful place, the students are great, I have great colleagues. There’s hardly a day goes by where I don’t have a big laugh about something with somebody. I just consider myself very, very lucky to have the good fortune to have a second career that I love so much and that’s part of the reason why leaving is bittersweet.”

At the end of the semester, Convey will say goodbye to QU after making the decision that it is time to move on and focus more on his family who reside in Massachusetts.

“I do love [teaching at Quinnipiac],” Convey said. “I do love this place. My living situation has been that I drive home on Thursday night and I spend Friday, Saturday and Sunday home. I drive back on Monday… If I could drive in half an hour to Quinnipiac, I would be here for the duration.”

Despite having to part ways with his job at QU, Convey is not going to stop teaching. He is teaching a single course called Mobile Journalism at Boston College in the fall.

“I consider it a privilege to be in the classroom no matter what I’m teaching,” Convey said talking about his favorite courses to teach. “I’m just really lucky to be able to do that.”

With the end of the semester approaching, Convey’s time at QU is ending shortly and he will not forget any of the time that he got to spend working here.

“Honestly, the two main things [about his time at QU] is just how very lucky I consider myself to be able to be part of this [journalism] department because I really really love my colleagues,” Convey said reminiscing about his time at QU. “You know, I had a great good fortune to get hired by a place like this with such wonderful students. I was really lucky and my second career presented me with a whole new set of challenges, a whole new set of pleasures. Something I could really work at and get better at… I leave with a grateful heart.”