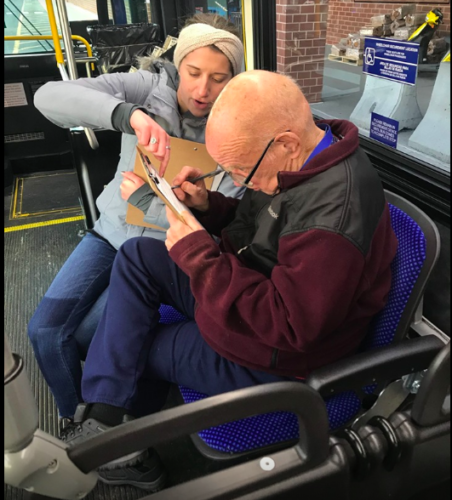 Hunger has been growing exponentially in the town of Hamden and Quinnipiac journalism students are hitting Hamden streets to report on it.

“As journalists, we are aiming to share information about food services and write articles about the problem and solutions (coming soon) in partnership with the New Haven Independent,” said assistant professor of journalism Amy Walker.

Walker’s JRN-400 Special Topics in Journalism class is specializing this semester in the epidemic of hunger in Hamden. Together, Walker and her 17 students in the class are researching the statistics of the issue and posting it on their website: Hamden Hunger Project.

“As Connecticut’s cost of living and income inequality rise, the prevalence of hunger has increased as well,” the Hamden Hunger Project website says. “Some 40% of Hamden residents are struggling to make ends meet and put food on the table, according to the United Way.”

As this issue has become locally recognized, the town of Hamden assembled a Food Security Task Force and gathered a year’s worth of research in their report: Facts & Faces: Food Hardship in Hamden.

“The exhibits and space is beautiful and the story is overwhelming,” DeLauro said in a video recording of the Hunger Summit. “It is potent and it reflects why we are here.”

DeLauro said that she was leaving shortly after her speech to take a train to Washington, where she works to support bills that fight for food assistance programs.

“We need to advance local solutions to oppress hunger,” DeLauro said. “We need to continue to build and marshal support for anti-hunger programs. Congress is an institution that responds to extra pressure. All of you are that extra pressure and don’t take no for an answer.”

Walker started the project last August, when she applied and received a $35,000 grant from the Online News Association. She hoped to use the money to teach journalism as something living and breathing, rather than as a classroom subject.

Junior journalism major Jessica Ruderman is one of Walker’s students and has been a pivotal point in the Hamden Hunger project.

“A decent amount of the research regarding hunger in Hamden was done before we started the class and that’s pretty much how Amy got the grant because she was able to prove that this was an issue that needed to be covered and no one else was doing it here,” Ruderman said.

The grant gave Walker and her students the opportunity to take a standard Special Topics class and create a community program. Throughout Hamden are three billboards, advertising a hotline for residents to find local food banks.

“We have a billboard and texting team that helped design the texting platform we use and then we have a mic group (my group) that has been working to set up the listening story booth we now have at the Hamden Public Library,” Ruderman said.

Walker’s goal this semester was to inspire her students to look at news reporting from a different perspective.

“We feel like we are getting information out to the community,” Walker said. “Part of my goal will all of this is to get students more interested in local news, innovate a little bit and try to do stuff differently. To not just look at news as stories that we see as important from the outside, but to spend time in a community, to get information to people in the community and build stories based off of that.”

Ruderman said this outlook has impacted her perception of the class. 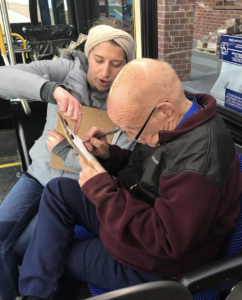 [/media-credit]“I think we always knew this was going to be bigger than a class,” Ruderman said. “This isn’t something based in Quinnipiac and we aren’t supposed to come off strictly as Quinnipiac students. This class is about being real reporters, real journalists, working on a real project about a real problem affecting real people. And that’s what has made me so attached to it.”

Senior journalism and graphic and interactive design major Michaela Mendygral did not need to take the class in order to graduate. She already had all of her journalism credits fulfilled. But, when a friend recommended the class, Mendygral decided to try it.

“It was definitely a progression from the beginning of the semester to the second half,” Mendygral said. “It has picked up so much. Initially, it was getting our face into the community and talking to people.”

“Quinnipiac is not in a bubble,” Mendygral said. “It is important that, as journalists, we are expanding beyond the Quinnipiac reach. We are seeing what Hamden really needs and what the people really want, not just shoving news in their face.”

Walker isn’t done. She said the summer will be busy and she is working to keep the project going, successfully.

“What we are finding is that doing stuff like this first gives us access to more people and more voices,” Walker said. “And I don’t feel as a journalist, you’re not supposed to be an advocate for things. But, I feel like what we are is an advocate for information.”