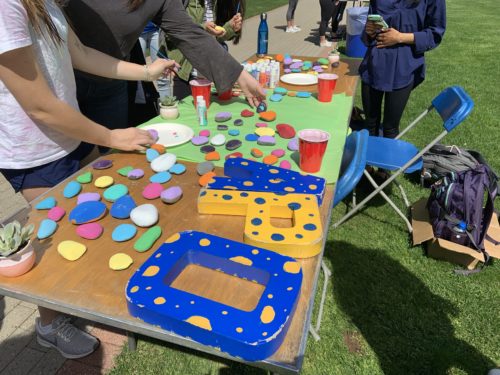 Planet Earth was at the center of the Quad and students’ hearts Wednesday, April 24, in celebration of Earth Day.

Sponsored by the Albert Schweitzer Institute and QU Dining and hosted by Students for Environmental Action (SEA), the Earth Day Fair promoted speakers in the Piazza and vendors on the Quad.

“We need to make sure that students know what is going on in the world today and they understand that they can make a difference,” said sophomore Anna Marie Ciccarelli, an English and environmental studies double major. “They just need to know how to make a difference.”

Duffy highlighted the importance of Earth Day by explaining the history behind the holiday. He started by speaking about Albert Schweitzer and his relevance to Earth Day.

Lavin introduced and concluded the day’s speakers. She said the goal of the fair was to inform, engage and excite the students.

“I hope that students who came to the event took away from it that although the idea of environmental sustainability can be kind of daunting and intimidating at times, it’s also something that can be interesting and exciting,” Lavin said.

“I hope they [students] are inspired by the many things, small and large that we can still do to change our culture, our economy, and our society from one that is so wasteful of the Earth’s resources, and so damaging to the ecosystems we rely on to survive,” Duffy said.

Sociology major Erin LeDrew was at the Students for Environmental Action table, encouraging students to recycle.

“I am super passionate about the environment and I went on a study abroad trip that was focused on environmental action in Costa Rica,” LeDrew said. “They have already been doing Earth Day through the QU Sustainability Committee but they wanted to expand it. Since we just started this club, we wanted to have this opportunity to have people know about our club and recruit people.”

The problem, LeDrew said, is that supporting the environment can have an apathetic nature to it.

“We wanted to have fun, show people that there are little things you can do when you don’t want to be involved in the bigger steps,” LeDrew added.

Among events and tables were yoga on the Quad, free fair trade chocolate and candy, opportunities for planting succulent plants and making blankets for local animal shelters.

“The turnout has been amazing,” LeDrew said. “I have heard a lot of people say this was one of their favorite events they’ve seen so far, which is awesome.”