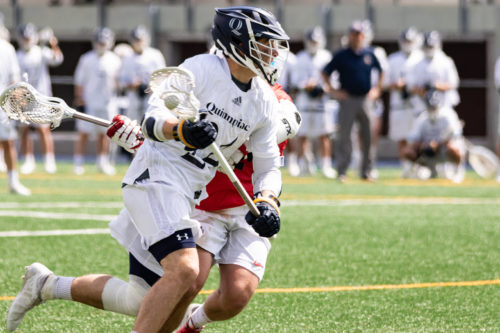 Before the game, Quinnipiac celebrated its twelve seniors’ collective time in the program by gifting them flowers and plaques, and allowing them to take pictures with family before the game.

Senior attack Foster Cuomo scored the first goal of the game just 49 seconds in, and followed that with another just one minute and 10 seconds later to put Quinnipiac up 2-0 over the Hawks early. 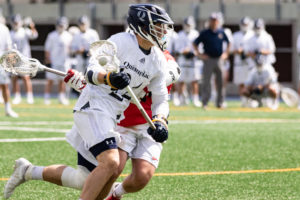 [/media-credit]“When you get him going early, you know he’s going to be dangerous the whole game,” Quinnipiac interim head coach Mason Poli said. “It gave the offense confidence, and when he gets going he draws so much attention. So he opens up everybody else, and when the defense is focused on him everything starts to click.”

Cuomo scored his third goal of the game with just under seven minutes left in the first period, securing a hat trick early in the contest. Quinnipiac had a 3-0 lead over the Hawks, but the momentum wouldn’t last forever.

Senior attack Mike Fletcher made it a four-goal game before Monmouth could get on the board, but once they did, it was all Hawks.

With two minutes left in the first quarter, Monmouth netted its first goal courtesy of redshirt freshman attack Cade Stratton. In the second quarter, the Hawks kept their momentum going, scoring two more goals to get within one of Quinnipiac, which led 4-3 at that point.

Quinnipiac’s scoring drought lasted 11 minutes and 21 seconds, starting in the first quarter and not ending until well into the second. Fletcher finally put one in for the Bobcats just over half way through the second period, notching his second goal of the game and putting the Bobcats up 5-3.

Monmouth managed to put in another goal just one minute before halftime to cut the Bobcats’ lead back to one. The game entered the break with Quinnipiac leading 5-4.

“Just stay calm was the message at halftime,” Poli said. “We weren’t getting our first time ground balls, losing some possessions there the times we were getting it. We told them use the clock a little more, milk the possession, get their [defense] a little tired and things will start opening up.”

It was Cuomo who opened up the second half scoring three minutes into the half, netting his fourth goal of the day to give the Bobcats a 6-4 advantage.

Cuomo’s goal was followed by another from Fletcher, his third of the day to record a hat trick as well. They would finish as the only two goal scorers on the day for Quinnipiac, carrying the load for the team.

With Quinnipiac still up 7-4, Monmouth would respond just one minute and six seconds after Fletcher’s goal to cut into the lead and make it a 7-5 contest.

Quinnipiac found a way to respond as it did all day. Fletcher recorded his fourth goal of the day and 19th on the season to extend the Bobcats lead back to three goals, putting them up 8-5.

The visiting Hawks, determined to stay in the game, scored just 27 seconds later to cut the Bobcats’ lead back to two.

Quinnipiac would enter the final quarter up three, though, as Cuomo recorded his fifth goal of the game with just two seconds remaining in the third quarter.

“Any time you can get a goal with a couple seconds left,” Cuomo said, “going into the next quarter, it’s a real blow to the other team. It was definitely a big momentum booster, but we wanted to build on it.”

The final frame saw Monmouth control possession, with which they outscored the Bobcats 2-1. With half the quarter remaining, the Hawks trailed by a score of 10-8, determined to come out on top.

Quinnipiac played hard until the end, locking up on defense. While the Bobcats weren’t able to gain possession, they didn’t allow a goal for the next eight minutes and three seconds.

That’s when Monmouth scored to make it a one-goal game with just 15 seconds remaining. Following the goal, Quinnipiac finished strong, sealing the one-goal victory over the visiting Hawks.

“It was great, especially the way the last two games have gone,” Poli said. “Marist was a close game in the end, and we kind of fell apart. One or two times we had a few bad turnovers, but for the most part our guys did a really good job closing out that game.”